What to Expect on Robben Island

Robben Island, lying off the coast of Cape Town, is part of a long list of islands known primarily for being prisons. But, unlike Rikers and Alcatraz, its history has seen it go from being a leper colony, to a thriving 19th century ‘town’ complete with a school and post office, to a notorious penitentiary, and now a must-see travel destination studded with historical buildings and home to a flock of adorable but highly endangered African penguins. 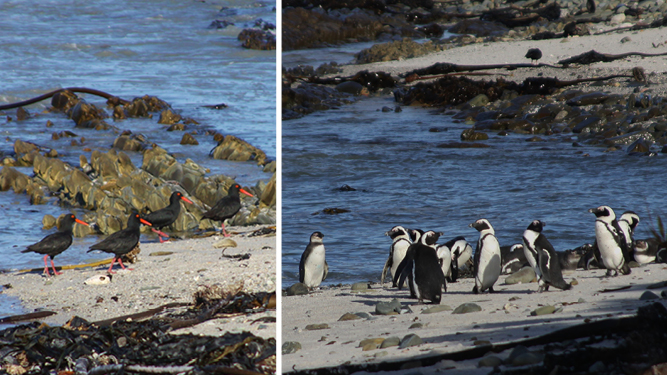 Your journey to Robben Island starts on the mainland: secure your tickets online or from the box office at the Gateway to Robben Island, which is located at The Clocktower at the V&A Waterfront. Your return ticket includes the journey by boat as well as entrance to the island but excludes refreshments. If you’re worried about feeling seasick, definitely pop an anti-motion sickness pill and stay above deck in the fresh air. 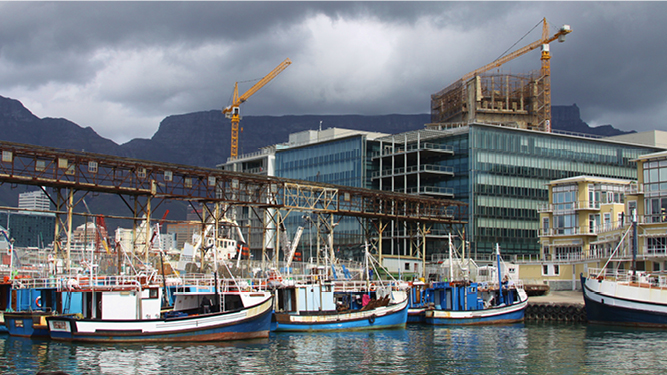 As you gently putter out of the harbour, don’t be surprised to see Cape fur seals cavorting in the water and sunning themselves on the barnacle-rippled docks. In fact, the island owes its modern name to them: ‘robben’ is from the Dutch word for ‘seal’ and not, as is often thought, a corruption of ‘robber’!

The views of Table Mountain and the city are sensational, especially on a clear day when the mountain isn’t draped in its cloudy ‘blanket’. The wind can be cool so bring a sweater or jumper but the sun can also be strong, so consider sunglasses, a hat or peaked cap, and sunscreen. Cape Town is famous for having ‘four seasons in one day’ so a day pack stocked with the basics is a good idea. 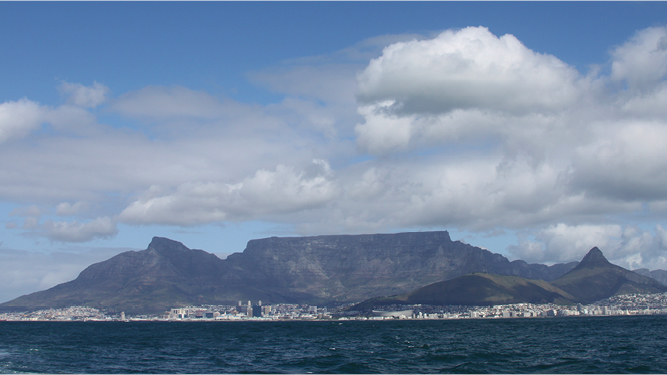 The city is dwarfed by, from left to right, Devil’s peak, Table Mountain & Lion’s Head.

The crossing takes more or less an hour. Once out in Table Bay, you might spot pods of dusky dolphins (they love ‘surfing’ in the boat’s wake) or huge, circular sunfish. Slowing down to dock, birders will be delighted to find a massive colony of breeding black-necked gannets – you might smell them before you see them! They live on a massive collection of dolosse – a South African invention of concrete sea breaks. 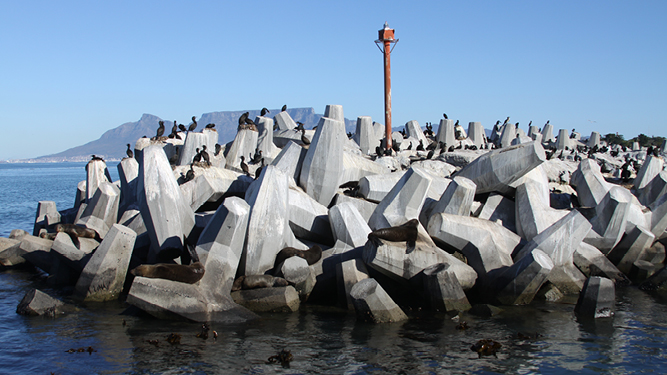 Hundreds of gannets & some basking, barking seals welcome you to the island.

From the harbour, you will board a bus in order to tour the main sites on the island: the maximum security prison and cell where Nelson Mandela was held for 18 years, banished black conscious leader Robert Sobukwe’s tiny house, the lime quarry where convicts toiled rain and shine, and the magnificent lookout over to Table Mountain. 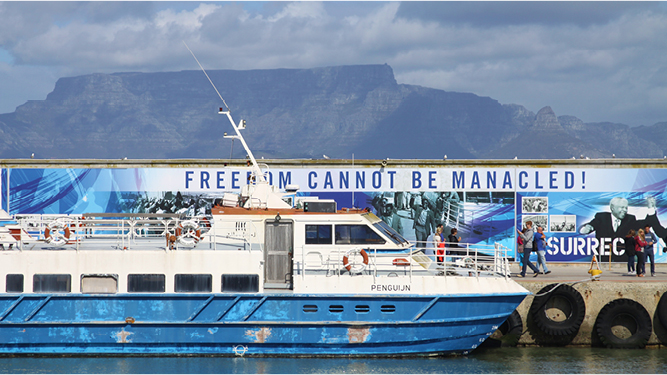 The harbor at Robben Island has seen millions of people come & go for centuries. 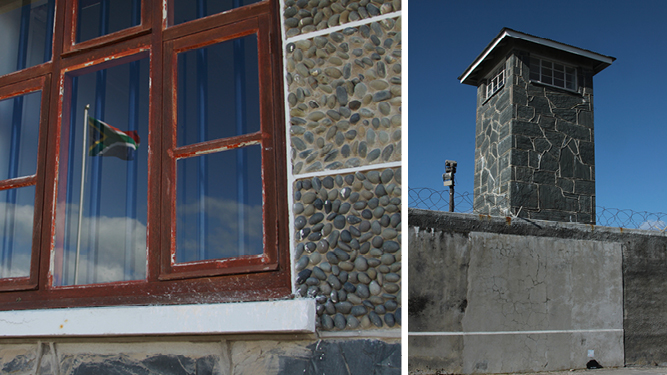 The pebbles were placed by a 21st artist as part of a project to reimagine the maximum-security prison complex. 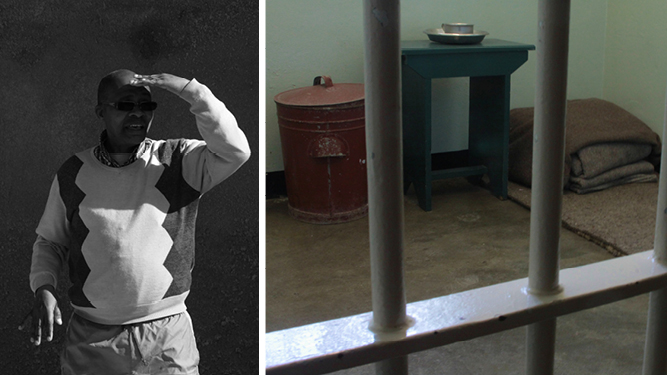 All the guides at the prison are former prisoners – feel free to ask questions. 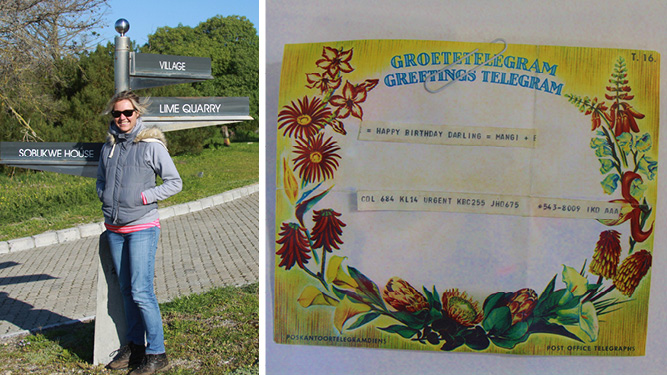 Angela on the island & a heartbreaking telegram from Sobukwe’s wife for his birthday.

The island is full of old buildings that reveal its many historic identities. There are several graveyards, not only for the lepers who died here but also the little children and their parents who succumbed in the 19th century. In spring, wild flowers like arum lilies spring up among the ramshackle graves, while the island’s flourishing population of tortoises make short work of their blossoms. 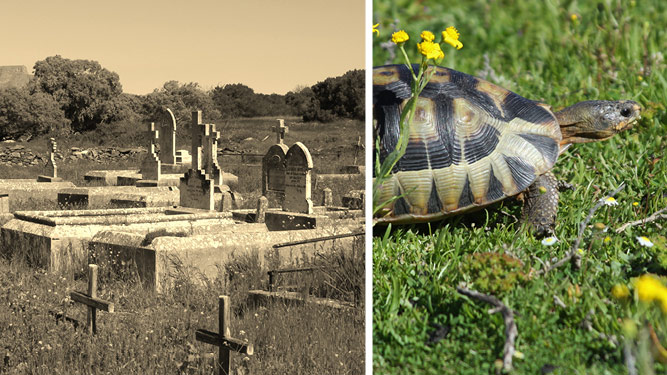 Beautiful marble tombstones have become a playground for tortoises.

There are tarmac roads, a post office, a lighthouse, residential houses, churches, a school – the community grew as more and more people came to live here to, initially, care for lepers but then to guard prisoners. Because crossings where uncertain, a school was built for youngsters and pregnant women were taken to the mainland a few weeks before birth just in case a storm blew up when they went into labour. 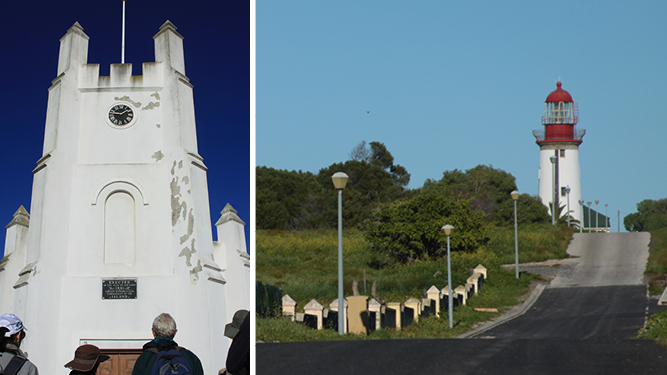 Many buildings have been abandoned & have fallen into despair, giving much of the island a ‘frozen in time’ feeling.

Although it is most famous for being the site of Madiba’s imprisonment, Robben Island is a microcosm of Cape Town’s social and natural history. Today, it is a memorable combination of the brutallity of the apartheid system but also a reminder of the tenacity of the human spirit and the resilience of nature. 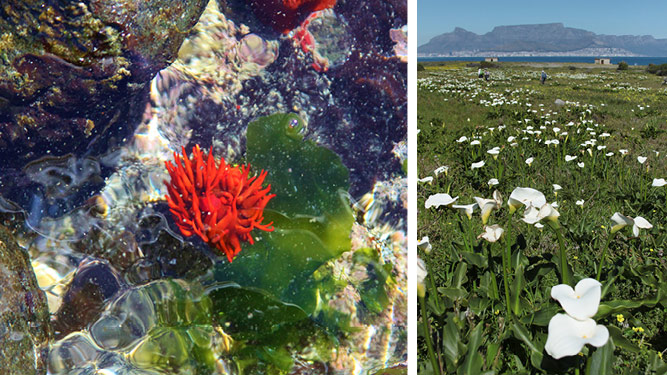 From anemones to arum lilies, the island is full of natural beauty. 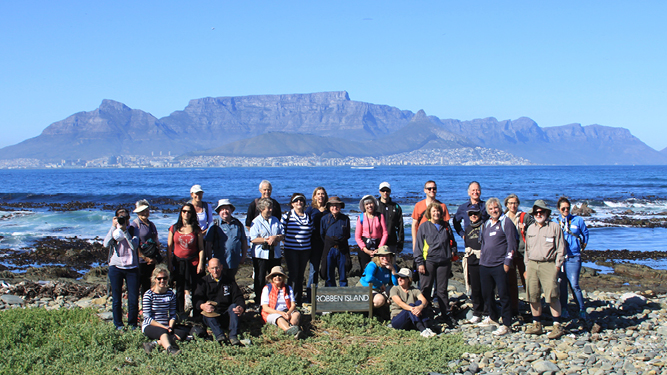