Where to See Lions in Africa

Lions are the indisputable kings of the African bush and one of the most sought-after sightings on a safari. It's incredibly exciting to see lions in Africa and somewhat of a primal fascination. Thanks to their reassuringly feline name – Panthera leo – we know we are technically dealing with 'cats' but lions are startlingly huge, almost bear-sized. Their muscular, barrel-chested bodies and jutting chins let everyone know who the boss is – and it's not the 2-legged creatures wearing sunglasses!

Lions are Africa's top predators and prey on big animals such as zebra, buffalo, giraffe, hippo and even young elephants. If you witness lionesses on the hunt, it's heart-in-mouth stuff and their entourage of hyenas, jackals and vultures always makes a fascinating sideshow. The same colour as the savannah they live on, lions are as much part of the African landscape as its flat-topped acacia trees and red, crumbly earth. Regal not only in stature, hearing their booming roars ring out at dusk as they gather to hunt is a never-to-be-forgotten experience. Their calls are also a spine-tingling reminder that the wilderness still belongs to them. 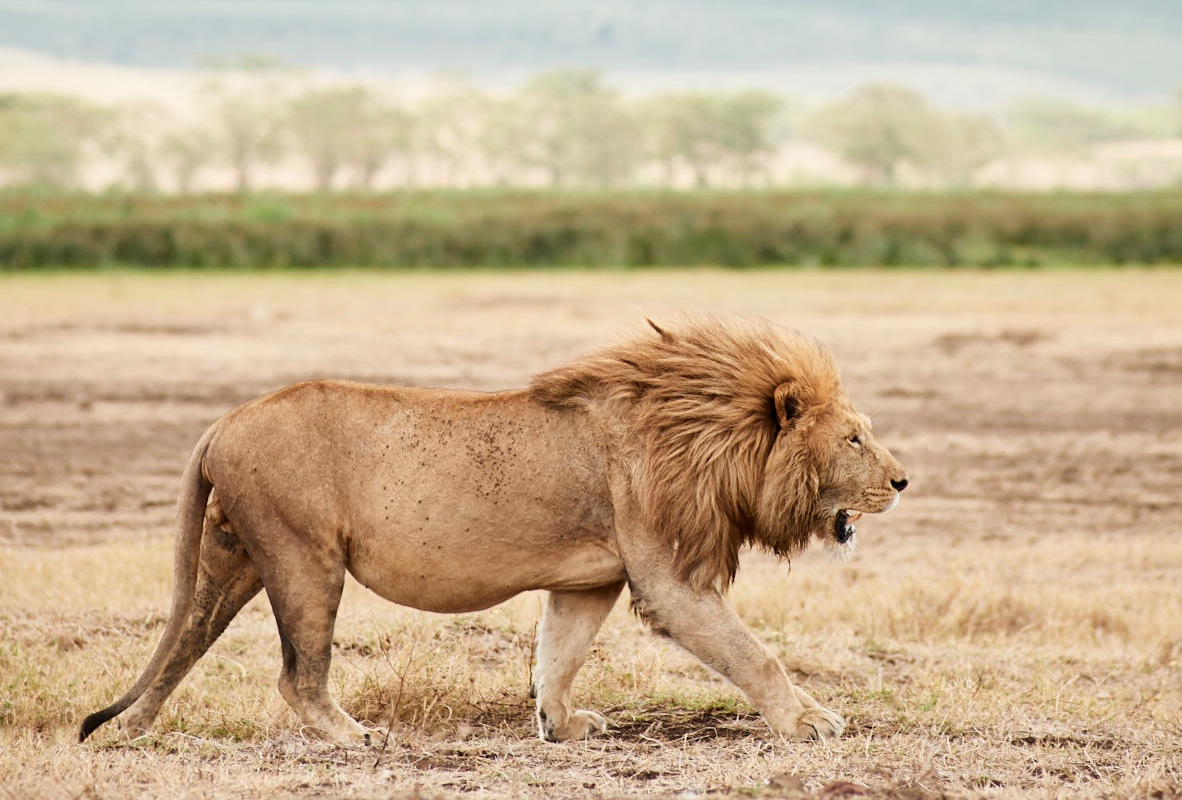 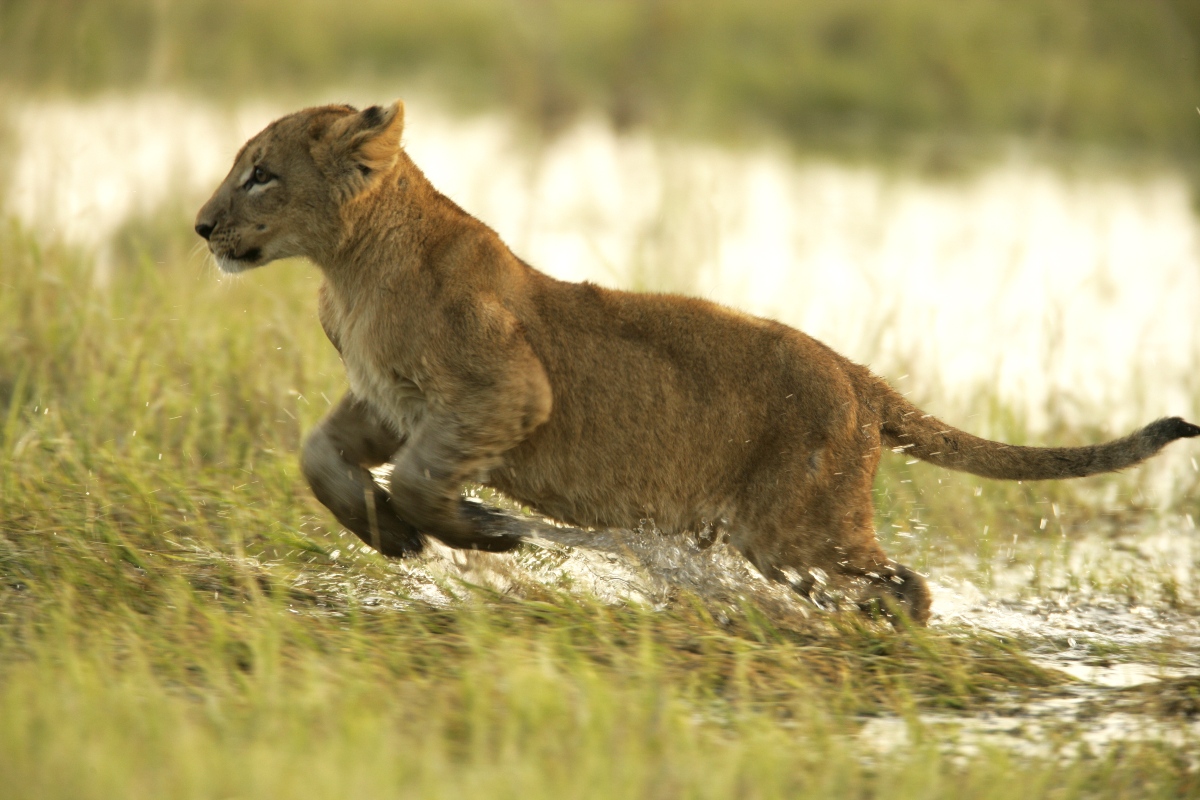 Everyone knows that cats don't like water, but the lions of Duba Plains in the northern Okavango Delta have learnt to thrive in it for good reason: nutritious grasses and permanent water make the area perfect habitat for buffalo. And lions just love buffalo.

But 2 000lbs of hoof and horn doesn't go down without a fight, and the lions of Duba Plains have evolved into quite extraordinary beasts. Thanks to the constant workout they get running through shallow water and wrestling with enraged buffaloes, the lions here are around 15 percent larger than normal. They've also adapted to hunting during the day (usually prides hunt at night and sleep during the day) when the buffalo herds are grazing on the exposed floodplains. This translates into epic game viewing and one of the very best places to see water-adapted lions in Africa.

Chobe's Savuti region is the famous stage upon which lion prides regularly clash with hyena clans for food and territory. This remote area is also known for its well-documented, powerful lions that take down Africa's biggest mammals like buffalo, giraffe and even elephants. One of the best places in Africa to see lions in the most rip-roaring predator action, Savuti will appeal to all wildlife enthusiasts. 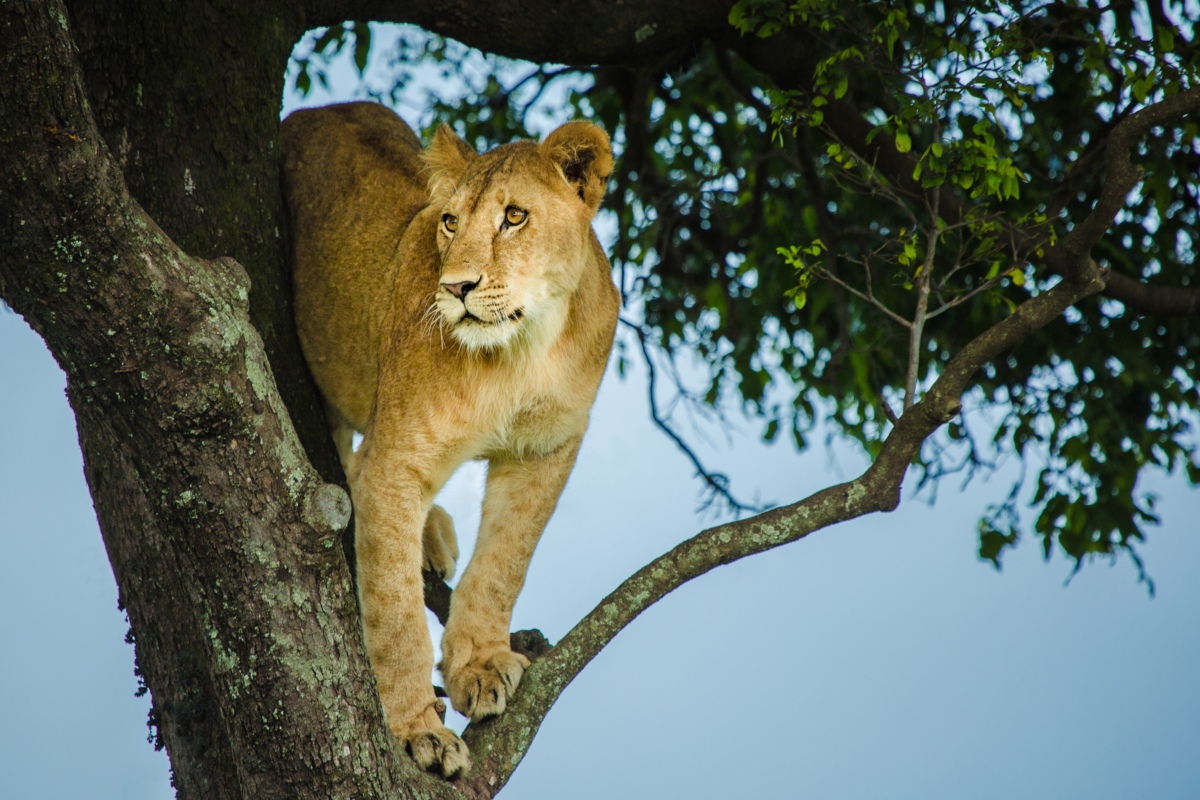 In Kenya's Masai Mara, the lions are so prolific that they once had their own BBC nature documentary series, Big Cat Diary. From about July every year, two million wildebeest cross the Mara River into the Masai Mara National Reserve to feast on fresh and succulent grass – under the watchful eyes of hungry lions. Not only is it a great place to see lions in Africa year-round, but a bonus of the Mara's flat, wide and open plains is that cheetah are perfectly adapted to it – it's a fantastic place to watch the world's fastest land mammal chase down its prey! 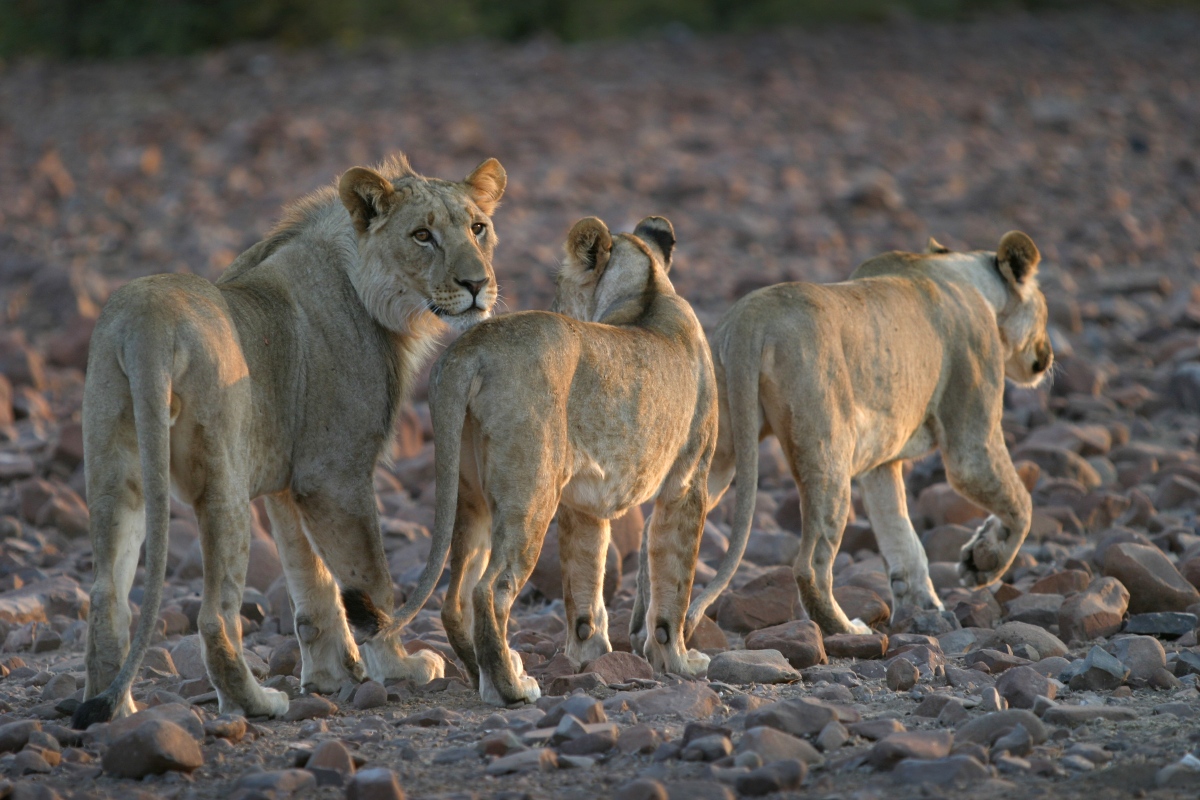 The lions of northern Namibia are some of the most fascinating on Earth, surviving in an unrelenting landscape where vegetation and prey are few and far between. The lions that roam the Namib Desert have adapted remarkably to this barren environment and are known as 'desert-adapted' or 'desert lions'. Given their nomadic nature, seeing them is never a certainty – your best bet would be in the remote Kaokoveld and Damaraland. 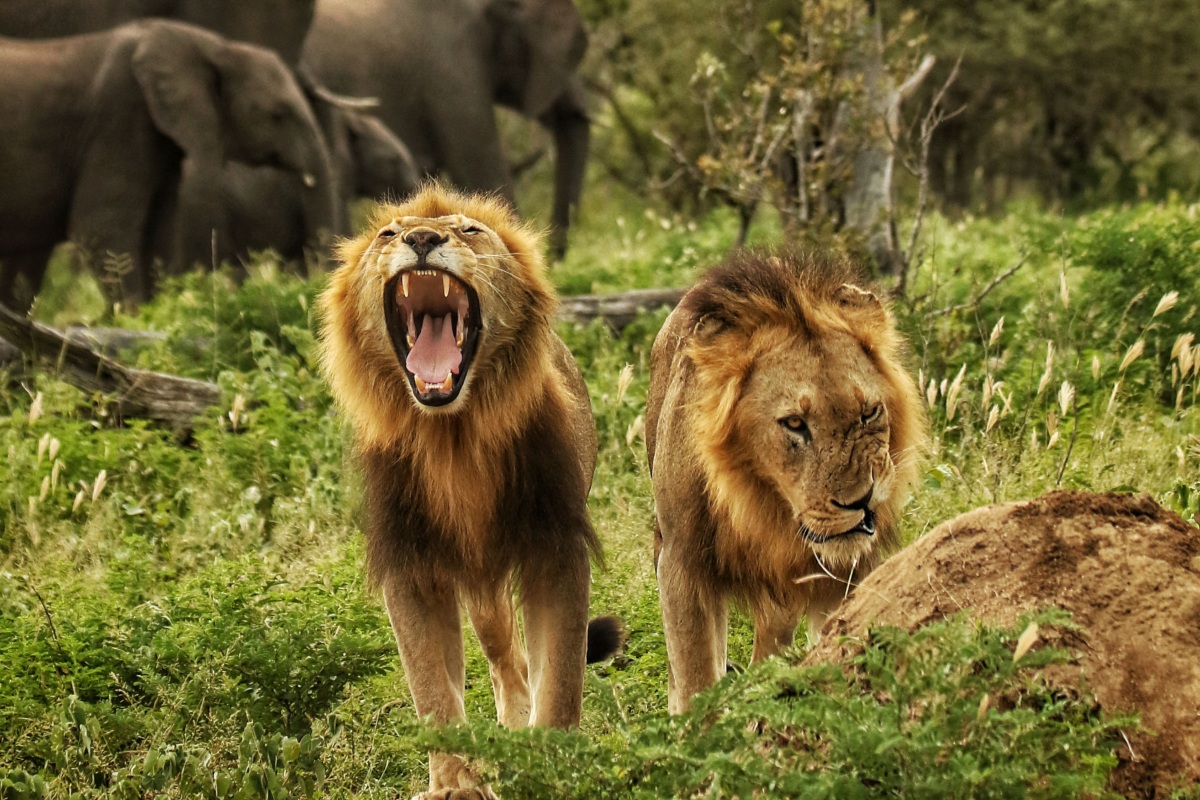 Home to most of the country's wild lions, the Kruger National Park has always been South Africa's premier destination for a lion safari. But Kruger is the size of Wales, and the distribution of its 2 000 lions is at the mercy of geography and climate. Areas of richer, grassier soils and higher rainfall support more animals to prey on, and so lion densities there are higher. Hot and dry northern Kruger is home to around five to six lions per 100km² (39 square miles), but the wetter and greener southern Kruger has more than twice that number. If you're planning a Kruger lion safari, we recommend heading to these private reserves:

No other area in the greater Kruger National Park offers a consistently spectacular big game experience like the private Sabi Sands Game Reserve. It's not uncommon to spot all the members of the Big 5 on a single game drive in Sabi – especially the big cats like lion and leopard. This is one of the most reliable places to see lions in Africa.

Unlike their tawny-coated, amber-eyed brethren, white lions have snowy fur and beautiful blue eyes – making them incredibly photogenic. Their paleness is not albinism but rather due to a harmless genetic quirk known as leucism. Because they occur naturally in the Timbavati Game Reserve, which is located to the north of the Sabi Sands on the western edge of the Kruger National Park, their Latin name is Panthera leo krugeri. Timbavati is actually an anglicisation of the traditional name 'Tsimba Vati', which means 'place where the star lions fell to Earth'. Timbavati is your best bet to see white lions in Africa. 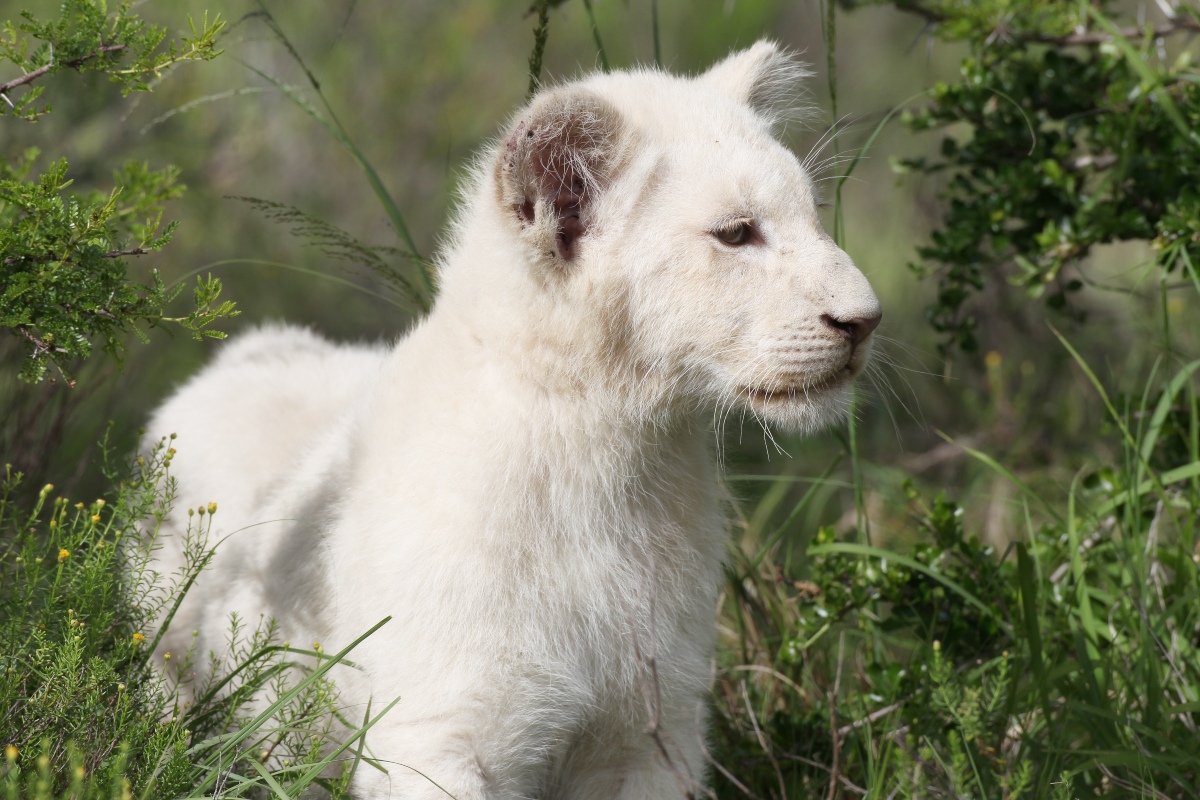 South Africa's Eastern Cape province is fast-gaining a good reputation for easy, no-hassle Big 5 safaris because the area is temperate (no extremes of cold, heat or rain), malaria-free and child-friendly. For a unique lion safari, we recommend:

A spell at Pumba Game Reserve is a great way to end a self-drive vacation along the gorgeous Garden Route or a holiday to Addo Elephant National Park – with the added bonus of perhaps spotting some white lions in Africa.

If safaris to the Eastern Cape are straight-forward, then those to Sanbona Wildlife Reserve are even easier. Lying in the Little Karoo between the quaint towns of Barrydale and Montagu, Sanbona is a perfect detour on a Garden Route self-drive tour or a great stop-over if you're driving the scenic Route 62. About three hours after leaving Cape Town, you'll be pulling up at Sanbona, home to the White Lion Project and the extremely endangered and little-seen riverine rabbit. 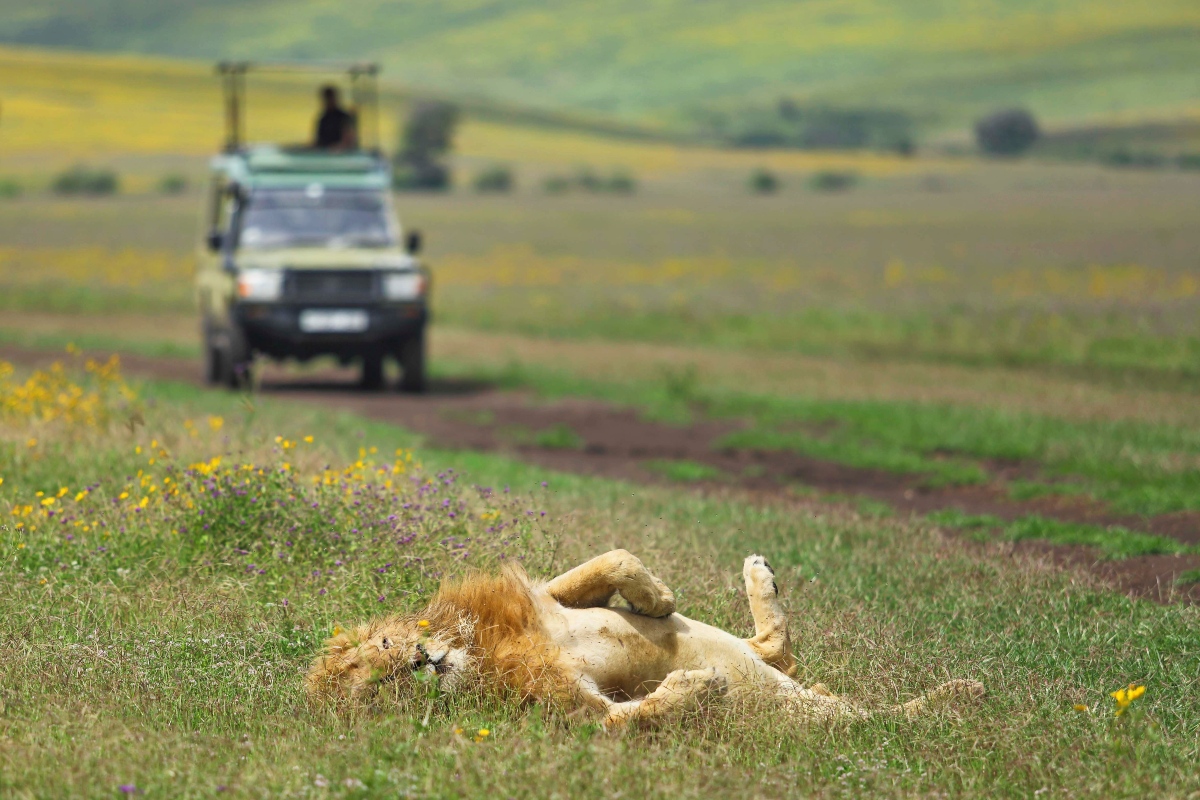 Look at it from a lion's perspective: if your survival depends on the availability of suitable food, how does a million wildebeest sound? Joined by tens of thousands of zebra and gazelle, that's how many wildebeest grunt and gallop their way around the Serengeti-Mara ecosystem, a circular migration so magnificent it spans two countries and takes most of the year to complete. The Grumeti Game Reserve in the west and the central Seronera region are some of the best spots in the Serengeti National Park to see lions in Africa.

If you're looking for some of the easiest and most reliable game viewing in East Africa, then head down onto the floor of the world's largest inactive volcanic caldera. Home to about 30 000 animals – including powerful lions – the Ngorongoro Crater delivers an incredible Big 5 safari experience in an extraordinary setting.

Chances are that you'll have lion sightings completely to yourself at Ruaha. Hidden away in southern Tanzania, Ruaha National Park sees fewer than 6 000 visitors a year – or about 16 a day – which makes it one of Africa's hidden treasures. Its wildly beautiful scenery and impressive biodiversity is home to 10% of the world's remaining lion population. In fact, it's second only to the Serengeti in terms of absolute numbers. Ruaha is where you'll see many lions in Africa, but hardly any other safari vehicles. 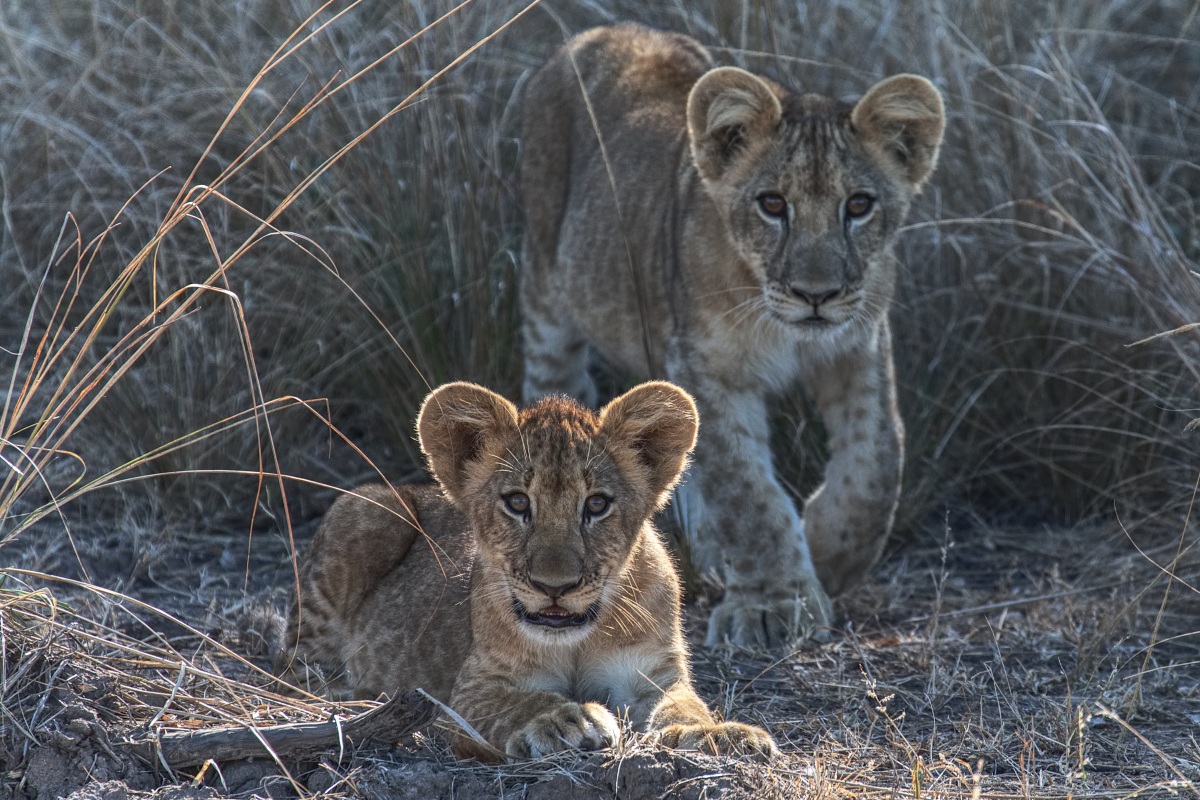 Zambia's huge reserves are home to a significant proportion of Africa's lions and most of them live in the Luangwa Valley, a wildlife haven and home to the South Luangwa National Park.

It was here that walking safaris were pioneered, and many lodges offer anything from a morning walk to a multi-day hiking adventure. But during the May to October dry season, you'll be high and dry in a 4X4 when you patrol the banks of the Luangwa River. Animals crowd the banks and oxbow lakes, becoming easy targets for Luangwa's lions.

Get in touch with one of our Africa Safari Experts to help tailor-make a trip that puts you in the best places to see wild lions in Africa: