This 9-day, fly-in itinerary takes you on a journey through Tanzania's unrivalled wildlife destinations - Lake Manyara, the Ngorongoro Crater and the fabled Serengeti - to deliver a dramatic and diverse big game safari.

Begin with the beauty of Lake Manyara with its thousands of flamingos and famous tree-climbing lions before moving on to encounter the spectacle of the Ngorongoro Crater floor, home to Africa's Big 5. The sweeping plains of the Serengeti provide a backdrop for the tour's grand finale. Game viewing is superb all year round, but if you have timed your safari with the wildebeest migration, you can expect massed herds and plenty of predator action.

Accommodated in a series of elegant lodges, this journey is ideal for first-time travellers to Tanzania or for the return visitor whose heart has been captured by this incredible country. As part of a honeymoon itinerary, combine this tour with a getaway to the romantic spice island of Zanzibar for an ultimate beach and safari combination.

Iconic, romantic and luxurious: this safari combines beautiful lodges and tented camps to bring you a classic safari with incredible wildlife encounters. 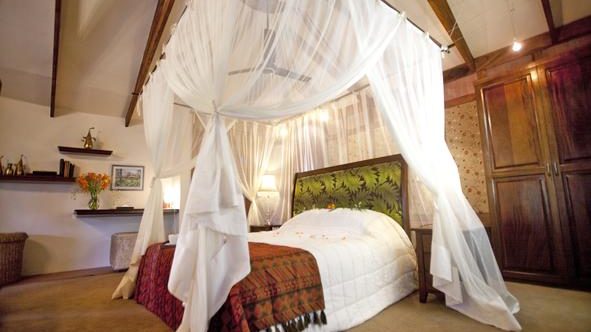 Day 1: A warm welcome to Tanzania

On arrival at Kilimanjaro International Airport, meet your guide for the drive to Arusha Coffee Lodge. Set on a picturesque coffee plantation, this charming lodge has beautiful views of Mount Meru and is the ideal place to acclimatise to Africa. After settling into your cottage, take a stroll through the plantations, visit the markets of nearby Arusha, or simply relax in the poolside gardens with a chilled drink. On cool winter evenings, get cosy next to a fireplace and sip one of the best coffees you will ever taste. 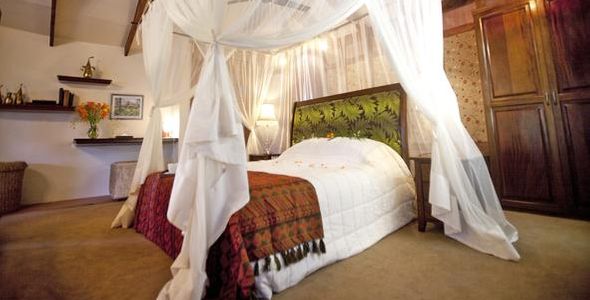 After a leisurely breakfast, depart for the airport where a charter plane waits to wing you to Lake Manyara. Meeting you at the airstrip, your guide drives into Lake Manyara National Park, whetting your appetite for the adventures to come. Before long, you arrive in the grove of mahogany trees that cradles Lake Manyara Tree Lodge.

Staying at the only lodge within the park creates an exclusive and intimate experience, perfectly complemented by the lodge's relaxed ambience. Lake Manyara Tree Lodge consists of ten delightful tree-house suites radiating from an elegant central lounge, bar and dining area. Open up the sliding doors of your thatched chalet and let the African sunlight pour in as you soak up the views.

Settle in for two nights, enjoying morning and afternoon game drives plus exciting night drives. A spectacular part of Africa's Great Rift Valley, Lake Manyara's rich variety of natural habitats are set around the soda lake, itself a haven for clouds of flamingos and other waterbirds. This is a paradise for birding enthusiasts! The forested valleys and open savannah plains support a large elephant population as well as giraffe, buffalo and many antelope species. There are fewer predators but topping the list are Lake Manyara's lions, famous for their habit of climbing trees. Ranked as one of the most spectacular wildlife destinations on Earth, this long-extinct volcano is the world’s largest intact caldera. Sheltering within its steep-sided walls are diverse habitats, including permanent wetlands, which support astonishing numbers of animals. Ngorongoro has long protected a thriving population of big game species: great-tusked elephants, robust black rhinos and famous black-maned lions.

Arriving at Ngorongoro Crater Lodge, you may feel as if you have arrived on the threshold of another world. Perched on the rim of the crater and sometimes shrouded in a fine veil of mist, the lodge looks out over what must be one of the most spectacular views in Africa. Settle into your lavishly decorated suite, marvelling at the panoramic vista from your private balcony. Meet your guide over a decadent high tea – an opportunity to discuss your special interests and the game viewing experience at Ngorongoro.

With a density of game rarely seen anywhere in Africa, combined with breathtaking scenery, the magic of Ngorongoro is evident long before you reach the crater floor. This is one of the few places in Africa where the Big 5 can be seen in a single game drive, and there is much more to observe. Herds of gazelle, wildebeest and zebra are resident here while smaller predators like caracal and serval cats are often seen along with lions and their eternal enemies, spotted hyena. The forests and marshes are the domain of elephants but the crater's wetlands belong to hippos and thousands of flamingos.

After a full day of adventuring and a delicious picnic lunch on the crater plains, you return to the lodge’s elegant comforts with time to digest the wonders you have seen, and share anecdotes with fellow travellers over fireside cocktails. A sumptuous dinner is served in the glamorous dining room bringing the day to a delightfully decadent close. Bid the crater farewell and board your charter flight to the Serengeti. From the air, the legendary reserve unfolds below you, its vast open plains stretching towards a distant horizon. This is where the famed Great Migration takes place at certain times of year – over a million wildebeest, zebra and gazelle migrate a vast circular route, following the rains to fresh pastures and the soft grass shoots that nurture their new born calves and foals. Driven by instincts as ancient as the Serengeti itself, the herds brave strong currents and lurking crocodiles to cross the treacherous rivers and face hoards of magnificent predators on the open plains.

Your home in this legendary place is Serengeti Under Canvas, a mobile tented camp that follows the migration. Traditionally elegant and as comfortable as any permanent lodge, Serengeti Under Canvas makes the most of its prime location on the Serengeti plains to deliver some of the best migration sightings in the region as well as excellent year-round Big 5 game viewing.

The three days at Serengeti Under Canvas provide plenty of opportunities to see why Tanzania is one of Africa’s premier safari destinations. Morning and afternoon game drives - led by specialist guides - are the main focus of your daily activities while night drives, guided nature walks and hot-air ballooning (optional extra) add new perspectives to your Serengeti experience. After an early morning game drive and last delicious brunch in camp, you embark on the journey home. Flying over this ancient landscape, you reflect on the spectacles you have witnessed: the humbling courage of wildebeest crossing a crocodile-infested river, the dreamy serenity of hot-air ballooning, the thrill of witnessing a hunting lion pride, and the joyful antics of zebra foals at play. All the sights and sounds of the Serengeti remain in your heart, transporting you back to the wide open sky and endless savannah.