4 Reasons Why You Should Travel to Zimbabwe 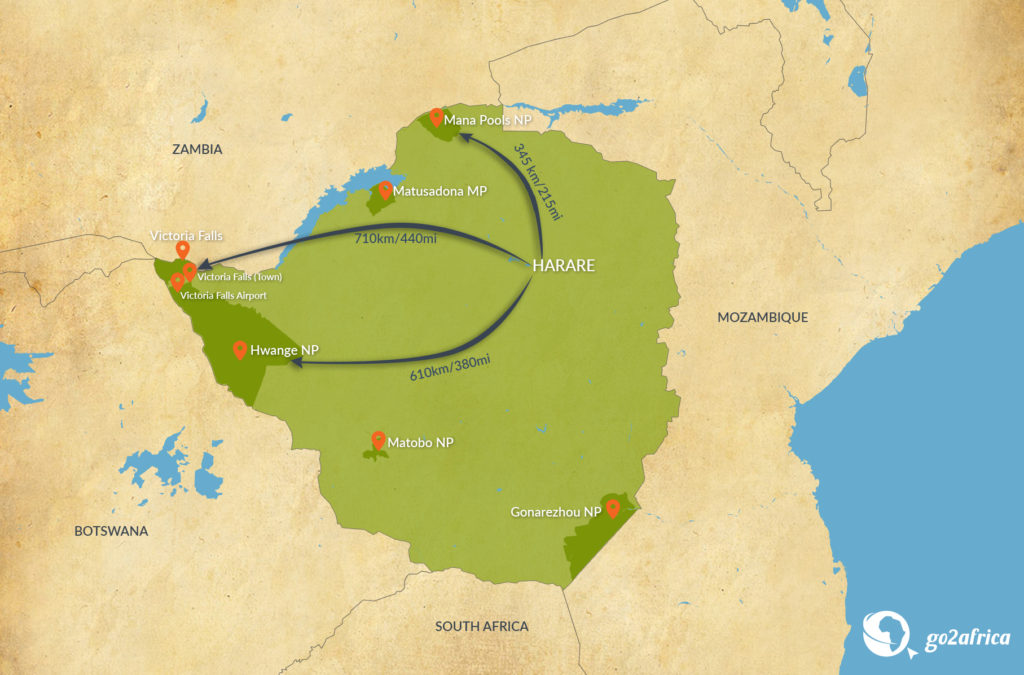 The major national parks are to the west while Harare is to the east and driving distance between them is very long.

The likelihood of military intervention in these areas is very, very low. Zimbabwe depends on national parks for foreign exchange income and citizens know and appreciate the value of tourism. They will not seek to jeopardise this. There is also much regional co-operation around areas such as Victoria Falls, where the Zambian and Zimbabwean governments work together. Hwange is close to the border with Botswana and Mana Pools shares the Zambezi River with Zambia – these governments are also working to ensure stability and security in the region. Neighbouring countries Botswana, Zambia and South Africa remain peaceful, stable and excellent options for safari.

Conservation efforts also depend on tourist dollars: Zimbabwe's wildlife has made a dramatic comeback since the resurgence of safari travel and formerly 'poached out' areas are now teeming with game. Conservationists, tourism authorities and ordinary Zimbabweans will work together to ensure that this incredible country and superb landscape remains safe, accessible and affordable for all us safari lovers to enjoy.

Zimbabwe’s fortunes are as varied as its landscape. Once a British colony known as Rhodesia in honour of empire builder Cecil John Rhodes, it won independence to become Zimbabwe and build a seemingly unassailable reputation as ‘the bread basket of Africa’. Its fertile soil and balmy climate is perfect for agriculture - it’s still the centre of Africa’s lucrative raw tobacco trade - but then came political turmoil once again as the government launched land reform programmes.

Today, the economy and social system in Zimbabwe are recovering, prompting many travellers to ask if it’s worth making the trip and whether the country is safe and well-stocked again. The answer is an unequivocal: ‘YES!' If you haven’t been on safari in Zimbabwe, now is the time. Travellers have already begun trickling back to enjoy the mega elephant herds in Hwange National Park, the incredible scenery at Matabo and spectacular canoeing safaris in Mana Pools.

I say: go to Zimbabwe, before that trickle becomes a torrent…!

.
Zimbabwe is rightfully known as one of Africa’s most rewarding game-viewing destinations, with well-educated guides who speak excellent English (Zimbabwe’s education system is one of the best in southern Africa). Zimbabwean guides have a reputation as being among the best in the business, experts who eat, drink and sleep the bush. Their passion for wildlife is infectious and they delight in showing you what makes their piece of Zim special.

#2 It's close to major travel hubs.

Zimbabwe is an easy flight from Johannesburg in South Africa, with Harare and Victoria Falls International Airports being more or less an hour’s flying time from OR Tambo International Airport. Fly into OR, spend the night relaxing in a top boutique hotel in Sandton or Houghton and, 60 minutes after taking off, be in Zimbabwe and quickly en route to your safari wonderland.

Zimbabwe has an excellent reputation for top-notch predator sightings.

In the north, you get a triple dose of natural wonder from Victoria Falls, Hwange and Mana Pools National Parks, a World Heritage Site.

From your deck at Ruckomechi Camp in Mana Pools  you can see both the Zambezi River and the far-off mountains of the Great Rift Valley. If you prefer a ‘roughing it’ kind of adventure, opt for Zambezi Life Styles where only four tents are set up from May to October each year to make the most of tiger fishing on the Zambezi. Waterbabies will love Mana Pools, where you can spend your  days peacefully canoeing and game watching along the waterways.

Victoria Falls, of course, needs no introduction. After the rainy season, Mosi-oa-Tunya is in full flood and provides a spectacle that can be seen for miles around. Zimbabwe and Zambia have a healthy rivalry about which ‘side’ is better to see the Falls; I’ll leave it to you to make up your own mind, but I will throw into the debate that two-thirds of the Falls are in Zimbabwe, meaning it has the most viewing points.

Two-thirds of Victoria Falls lies on the Zimbabwean side of the border.
It's easy to see why it's named The Elephant Camp!

The Hwange area is heaven to anyone who is nuts about elephants. Up to a thousand have been counted visiting a single waterhole in a day and nearly 40 000 are said to roam the park, promising superb sightings on day-time game drives. At night, stretch out on Little Makalolo’s special ‘sleep-out’ platform that allows you to drift off beneath the Milky Way and awake to a golden sunrise…

Stare in wonder at the Milky Way from your room at Ruckomechi.

#4 Zimbabwe is full of hidden gems.

If you’ve done the traditional safari circuit and are yearning for new vistas, Zimbabwe is the answer. It's currently an low-volume high-quality safari destination, making its lesser known parks like Matusadona, Matobo, Gonarezhou and Malilangwe offer the intrepid traveller an authentically wild experience - imagine having acres of teeming wilderness virtually all to yourself!

Matusadona borders Lake Kariba, making its soil fertile and its grasses lush. And where there is lush grass, there are antelope galore. Where there are antelope, you can expect to find the second-highest concentration of lions outside Tanzania’s famed Ngorongoro Crater.

Long a sacred place for ancient Zimbabweans, their presence still echoes down the centuries at Matabo in the form of beautiful and delicate rock art – some 3 000 paintings are scattered among its massive boulders and rocky outcrops. Matabo, which is home to Big Cave Camp, is an easy transfer from Zimbabwe’s second largest city of Bulawayo. At Big Cave, not only are you close to rock art ‘galleries’, but the seven A-frame chalets are built from hand-hewn stone lending the lodge a romantic, rustic air.

In Zimbabwe's south, Gonarezhou links up with South Africa’s iconic Kruger National Park and Mozambique’s Limpopo National Park to form the vast Great Limpopo Transfrontier Park. Aptly named considering the plethora of wildlife found here, Gonarezhou means ‘Place of Many Elephants’. Bordering this pachyderm paradise is Malilangwe (meaning ‘Call of the Leopard’), a private reserve that is dotted with red cliffs and baobab trees that soar into the sky. Talk of Malilangwe brings us to one of the biggest reasons to visit Zimbabwe, its outstanding commitment to tailored, private and exclusive experiences.

At Singita Pumashana, for example, you jet into Malilangwe at the Buffalo Private Airstrip before checking into one of only six luxurious suites set on a cliff overlooking Lake Malilangwe. Between sensational game viewing, you stretch out in the yoga room, de-stress at the spa (try a ‘Hakuna Matata’ - No Worries - treatment) or work off the delicious high tea on the tennis courts (clay or Rebound Ace, whichever you prefer). At night, choose the perfect accompaniment to dinner from over 220 vintages in Pumashana’s expertly curated cellar. For a once-in-a-lifetime treat, celebrate with family and friends in the exclusive-use safari villa, which sleeps 10, has its own swimming pool, a Swarovski telescope for game spotting, and staff accommodation.

Zimbabwe is that ideal combination of spectacular wildlife, down-to-earth people and gorgeous accommodation that runs the gamut from intimate tented camps tucked away in the secret nooks and crannies of the Zambezi to luxurious lodges that will set any honeymooner’s heart aflutter.

There’s really no reason not to go and every reason to hurry before the rest of the world cottons on!

Hwange is known for its large herds of elephant, which tend to congregate around waterholes during the dry season.

Our expert Ramona says: "Largely undiscovered, unspoilt and unique - Zimbabwe has many hidden gems, on this trip you will discover our favourites. Experience Africa’s wildlife and wilderness in authentic safari camps, with genuine hospitality in incredible locations, this is Africa for the seasoned traveller…"