When is the Best Time to Visit Victoria Falls?

The best time to visit Victoria Falls is from February to May, directly after the summer rains, when you’ll see the world’s largest sheet of falling water flowing at its greatest volume. The tricky thing about visiting Victoria Falls is that the most impressive spray doesn’t coincide with peak safari season in nearby Chobe in Botswana or Hwange in Zimbabwe. Some activities, like swimming in Devil’s Pool and certain sections of white-water rapids, are also far too dangerous to undertake when the water is at its highest and fastest.

We don’t recommend visiting the Falls at the end of the dry winter season – October through November – when the water level is lowest, and the weather is very hot and humid. Low-water season guarantees you’ll have panoramic views (no misty spray) on both sides of the Falls, but the Zambian side (about one quarter of its width) may have dried up completely and all you’ll see is bare rock face. Water flow on the Zimbabwean side is permanent but ebbs and flows in volume with the rainy season.

Month by Month Guide for Travelling to Victoria Falls: 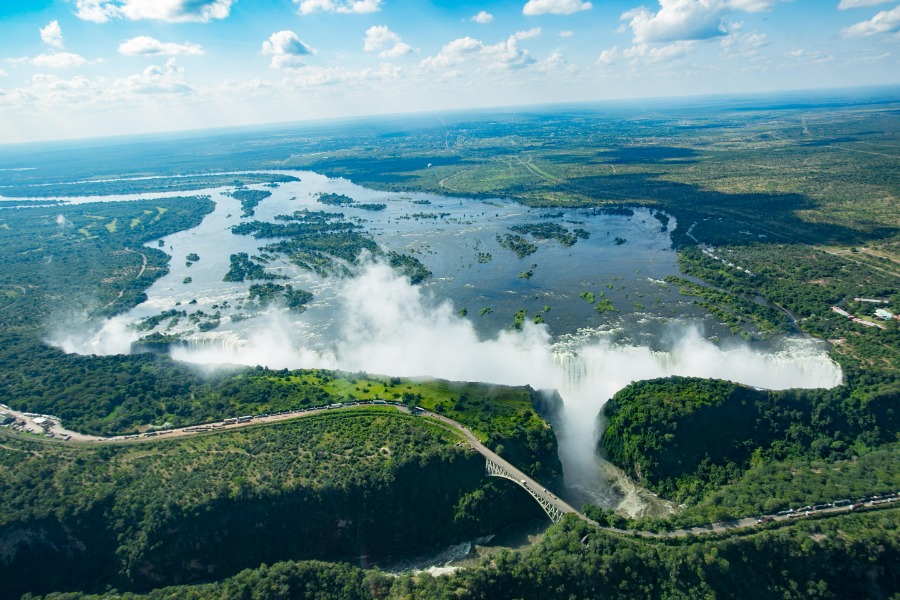 January is the height of summer but it’s still low-water season. It’s not the best time to see Victoria Falls, but the Zambezi River will have begun to rise from all the summer rainfall. January offers great discounted travel deals because it’s not quite peak season yet. It’s the ideal time for white-water rafting and enjoying luxury Victoria Falls lodges.

Visiting Victoria Falls can be a sensory overload: the noise, heat and moisture come together in an unforgettable natural showstopper. February is the best time to see Victoria Falls if you want to view this famous landmark at full capacity with the Zambezi River plummeting down into the gorges below. February to May is not the best time to make the most of the Fall’s close proximity to its neighbour, Botswana, one of Africa’s legendary Big 5 safari destinations, unless you don’t mind travelling in the wetter Green Season.

Victoria Falls is roughly twice the height of North America’s Niagara Falls, and the thunderous roar can be heard for miles around. In March, the falls will be flowing at full capacity, and you can expect hot, misty and thunderous afternoons. White-water rafting and other adventure sports continue on the Zambezi River, but rafters must be on alert as the high-water levels provide terrifying conditions even for experienced adrenalin enthusiasts.

Travelling to Victoria Falls from April to June 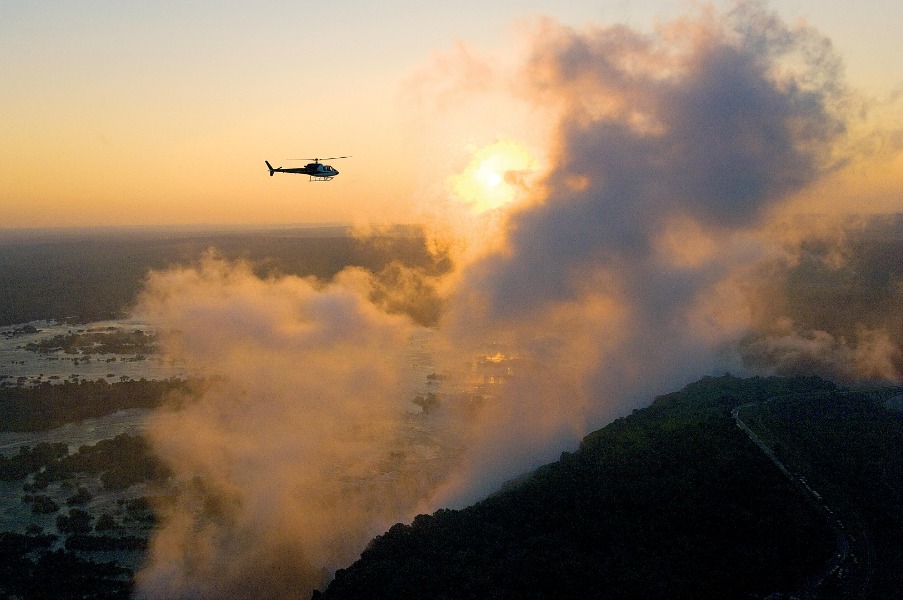 The summer rainy season comes to an end in April and the temperature does drop a bit before the mild winter really starts. This is one of the best times of the year to enjoy Victoria Falls tours. Due to the heavy spray and mist created by the Falls, it can still be difficult to see it in its entirety at ground level - it’s better seen from the skies on a helicopter tour.

May is the start of the dry winter season at Vic Falls and the temperature can drop suddenly. This is considered the best time to go to Victoria Falls if you want to avoid the heat and rainfall and enjoy the cooler, winter conditions.

The best time for a Victoria Falls holiday combined with a Chobe River safari is the dry winter period from June to August. Expect great game viewing, warm days and cool nights, little to no rain, and plenty of water still thundering over the precipice. 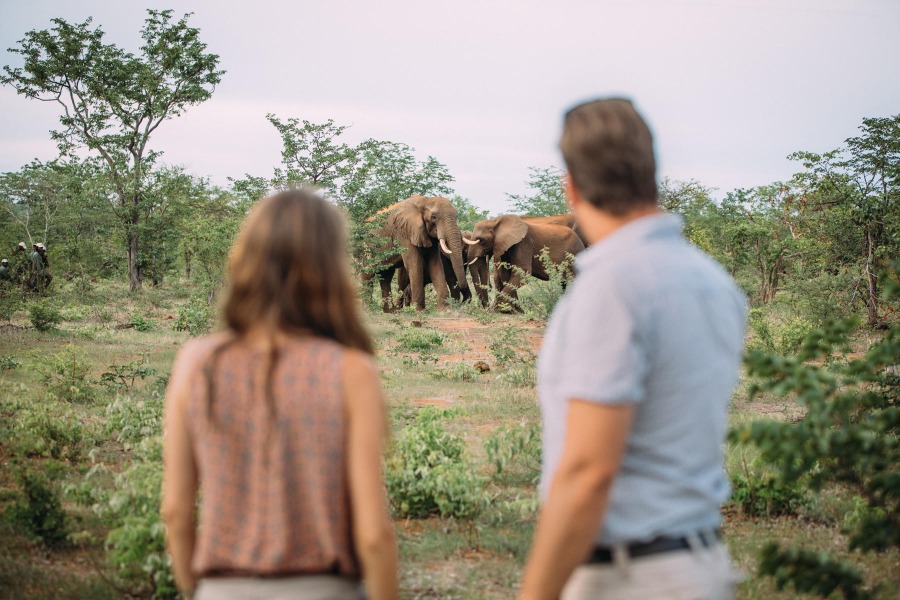 July is the best time to visit Victoria Falls for the mild daytime weather and good views of the Falls, even though the Zambezi is not as full during this dry season. July is also the month when the famous lunar rainbow makes its stunning appearance.

August is another dry month at Vic Falls but it’s slightly warmer than the cooler climate during July. August is also considered a great month for white-water rafting while the famous Devils Pool usually opens towards the end of this month.

September is officially the start of spring but still falls under the dry season. There is no rainfall yet, so weather conditions are perfect. September is one of the best times to visit Victoria Falls. It’s not too warm and wildlife viewing is good in the national park, but bear in mind that the later you visit, the drier the waterfall will be.

Travelling to Victoria Falls from October to December 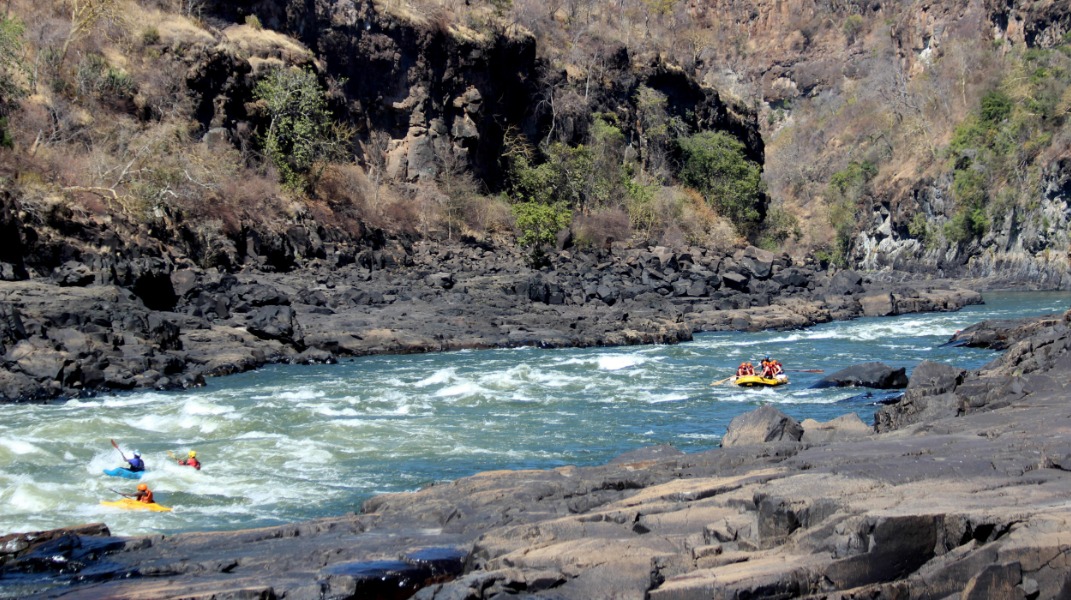 October is the hottest month of the year. After no rain for the past few months the Zambezi starts to run very low just before November. This is not considered the best time to visit Victoria Falls due to the flow of the Falls being at its lowest.

The Green Season usually kicks off in November with the first spring rains, but it takes time for the water that has fallen in the Angolan Highlands to make its way down to the series of massive gorges of the Falls. This is an ideal time for birding as the migratory bird species start arriving, marking the start of the birdwatching season in the area.

December may be slightly cooler but it’s still warm and is the second wettest month of the year, so afternoon thunderstorms occur daily. With all the rainfall the vegetation starts to come to life. Birdwatching is superb during December, and this is the last month to take on the rapids for white-water rafting.

Ready to Start Planning Your Visit to Victoria Falls?

Chat with someone who's been there. Get in touch with one of our Africa Safari Experts to help tailor-make a trip to Victoria Falls that's right for you:

From $285 per person sharing

From $405 per person sharing

From $740 per person sharing