Where to go in Africa in December

As the northern hemisphere sinks into the short, cold, dark days of winter, Africa stretches its arms out wide in a warm welcome. Summer gets going in Africa in December and many destinations are at their best. The weather in Africa in December is mostly hot and sunny, while the occasional cooling rains in the interior 'green' things up.

Great wildlife migrations are taking place now as fresh grasses begin to cover Africa's rolling plains from the Serengeti to the Kalahari Desert. The herds attract predators in great numbers and travellers on an African safari in December usually enjoy plentiful sightings of big cats in action. Migrant birds arrive to fill the air with colour and song, and Africa’s trees stand in full-leafed glory, casting welcome shade over December safari picnics.

Beach holidays are excellent at most Indian Ocean destinations, too. Whether you're planning a safari or a beach vacation (or a combination of both), keep in mind that Africa in December can be busy. Beaches are at their sunniest and the traditional Christmas and New Year summer holiday season is in full swing.

If you live in the northern hemisphere and you're thinking about visiting Africa in winter, December is a wonderful and festive time of the year – here are our best recommendations for where to go in Africa in December: 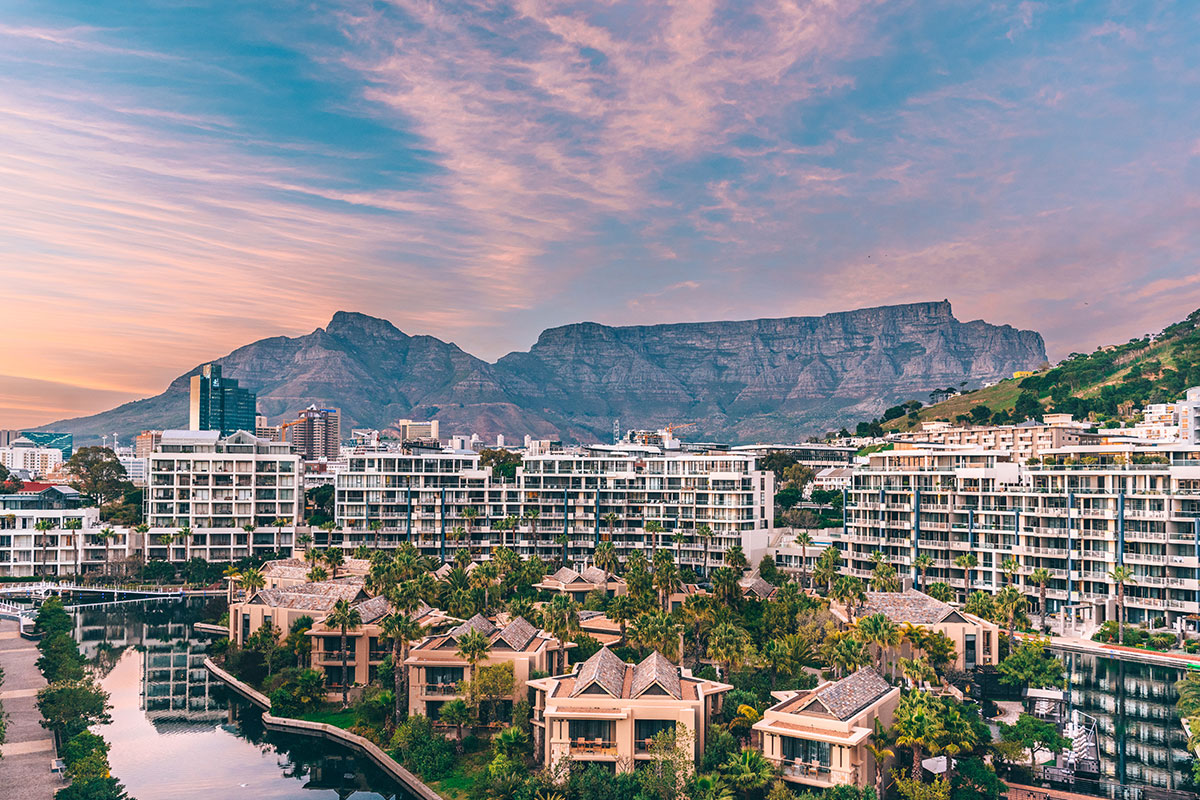 With some of the finest Big 5 game viewing on the continent, plenty of opportunities to combine bush and beach holidays, and well-developed infrastructure that makes it easy to get around, South Africa in December offers unforgettable holiday experiences – no wonder it's one of the best places to visit in Africa’s in December!

Continually voted as one of the world’s top cities to visit, Cape Town remains one of the best places to visit in Africa in December. With picturesque mountains, bottle-green wine valleys and gorgeous beaches all within easy reach, the 'Mother City' is one of South Africa’s best-loved travel destinations and at her prettiest in December.

The weather is hot and Martini-dry, the beaches buzzing and the mood infectiously cheerful – perfect for Christmas in Africa. We recommend hiring a private villa to have a prime position at the best beaches, exclusive use of swimming pools and parking, plus housekeeping and 24-7 security.

Our Favourite Places to Stay in Cape Town:

From $130 per person sharing

From $145 per person sharing

Arguably the most beautiful stretch of coastline in Africa, the Garden Route in South Africa runs from a couple of hours outside Cape Town to just after the seaside town of Plettenberg Bay. It’s a firm family favourite for a holiday in South Africa in December, and the ideal way to explore all the Garden Route’s sandy beaches, rocky shores, quaint towns and indigenous forests is to rent a car and drive yourself.

Our Favourite Places to Stay on the Garden Route:

From $105 per person sharing

Further up the coast, KwaZulu-Natal (KZN) offers a sunny subtropical beach experience, complemented by Big 5 game reserves, wetland parks and coral reefs. KZN is one of the best warm places to visit in South Africa in December for top bush-and-beach safari combinations that bring together the indulgence of a safari lodge with the barefoot-chic of a beach resort.

Our Favourite Places to Stay in KZN:

From $260 per person sharing 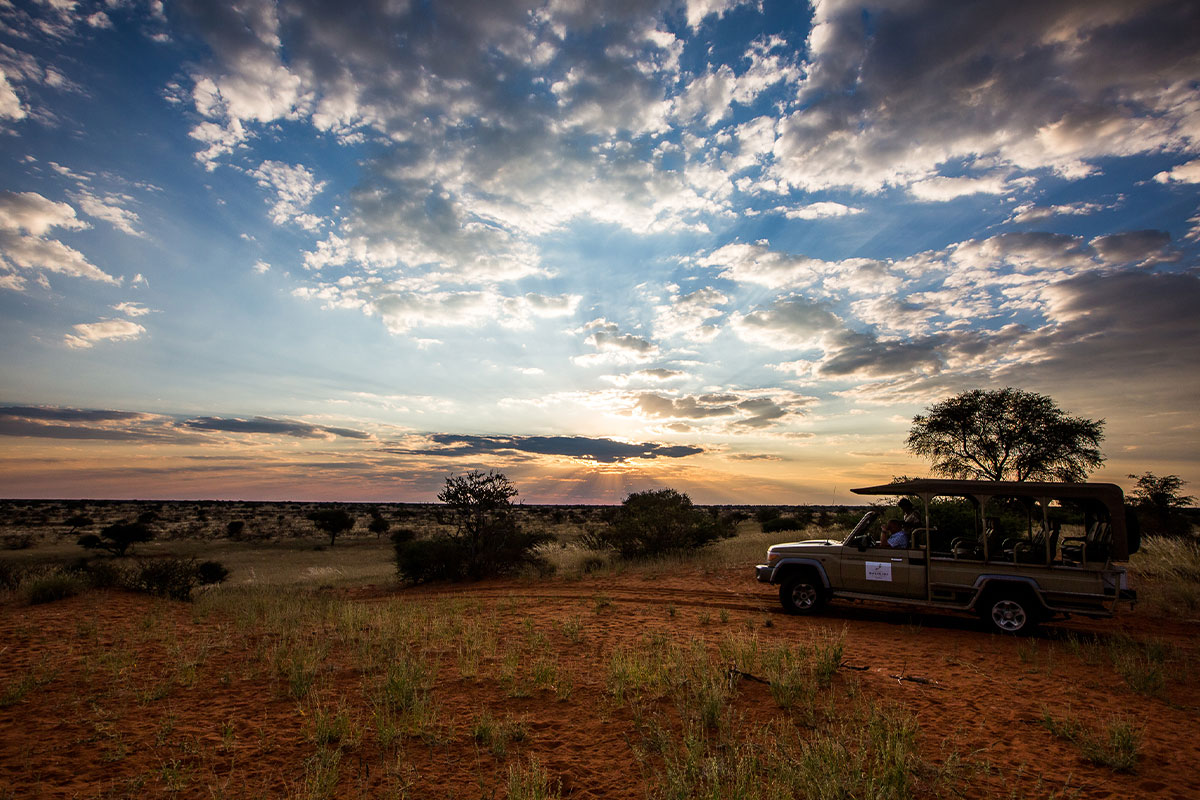 With plenty of top predators – it’s where to see African wild dogs, lion, leopard and hyenas – and abundant plains game, a Botswana safari is guaranteed to be one of the best African winter holidays you’ll ever have. Aside from being one of the top big game safari destinations, Botswana is also one of the safest countries in Africa to explore.

Travel to Botswana’s Kalahari region for a December safari and you won’t believe your eyes. Green grass covers the once-baked earth and watering holes, which were powder-dry just a month prior, brim with birds and beasts. November to April is Green Season in Botswana and if you can put up with the odd afternoon thundershower (you may even get no rain at all), then a Kalahari safari in December is not to be missed.

Make sure you pack plenty of extra camera batteries, because the Kalahari’s annual show is taking place. Thousands of zebras arrive, snorting and braying their way to the lush fresh grazing. Springbok antelope herds give birth en masse, covering the landscape in wobbly-legged lambs just as herds of wildebeest and even buffalo arrive. And with all this 'T-bone on the hoof', the Kalahari is where to go in Africa in December for bitter-sweet predator action as beautiful black-maned Kalahari lions, cheetahs, wild dogs and hyenas take advantage of easy prey.

Our Favourite Places to Stay in the Kalahari:

From $640 per person sharing

Ready to Plan Your Trip to Africa in December?

Get in Touch
Tanzania 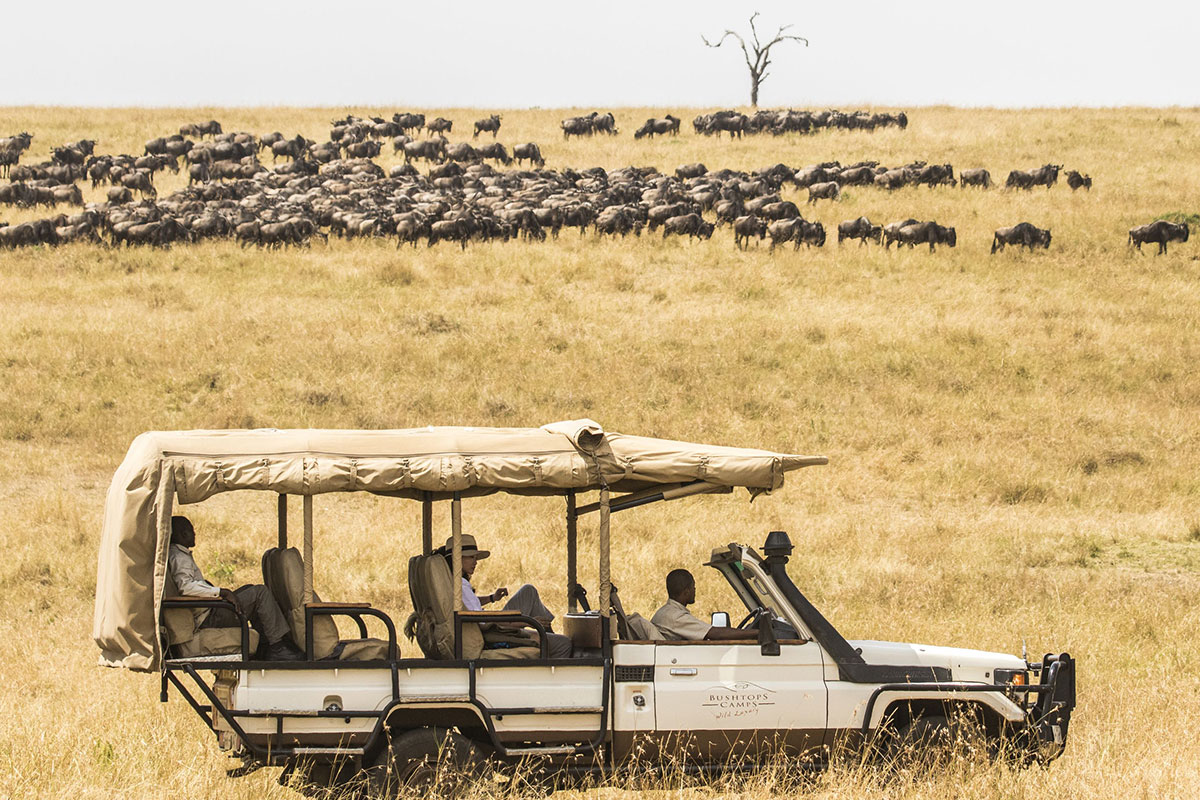 Offering a stunning diversity of landscapes and wildlife, this East African country appears on plenty lists of the best places to visit in Africa in December. Top this off with the ease with which visitors can obtain visas for Tanzania and you’ve got the formula for a fantastic time in Africa.

The 'short rains' season from November to December relieve the dry mid-year winter in Tanzania. Clouds build up in the mornings and break in spectacular, but generally short-lived, showers in the late afternoons that are unlikely to affect game viewing.

Migrant birds return from the northern hemisphere and resident plains game give birth. The Wildebeest Migration is still heading south to the great plains and offer plentiful targets for the Serengeti’s big cats. If you’re looking for dramatic game drives, the Serengeti is where to go on an African safari in December.

Temperatures are pleasant – it doesn’t get much above 28°C (82°F) – and game viewing is good right across Tanzania. Elephant-packed Tarangire National Park, yet to receive its main rains, is another great place to go on an African safari in December.

Created about 3 million years ago when a big volcano exploded and collapsed on itself, the Ngorongoro Crater is the largest intact volcanic caldera on Earth. It’s one of the world’s most spectacular natural wonders, supporting over 25 000 animals.

While it’s mostly green and lush throughout East Africa in December, the Crater is particularly gorgeous at this time of year. Wildlife photographers are in for a treat in one of the easiest places to see the Big 5.

Second-time-round safari visitors may want to explore a little further away from the more popular destinations in Tanzania. Early rains are turning Southern Tanzania’s Ruaha National Park and the Nyerere National Park (Selous) green, and a December safari is considered good for game viewing.

Beautifully wild, enormous in size and filled to the brim with wildlife, these areas offer crowd-free safari experiences in East Africa in December. 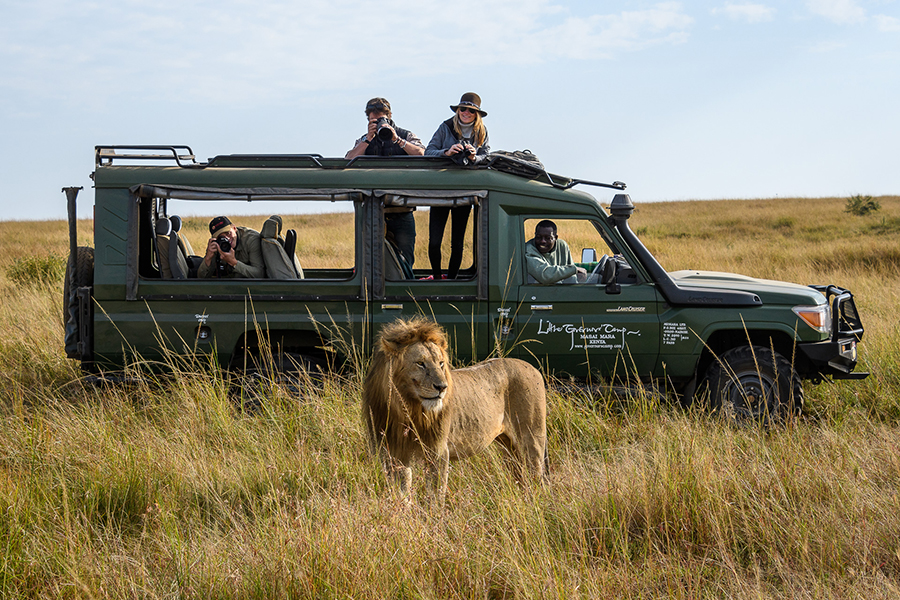 Incredible natural beauty and unforgettable cultural encounters make Kenya a strong contender for the top spot on the list of best African holidays in December. Combining time on seemingly endless green plains with the country’s pristine beaches is the perfect way to spend a holiday in Kenya in December.

The Masai Mara is out of Migration season – November kicks off the short summer rains which trigger the last leg of the Wildebeest Migration, when the herds move south to the Serengeti to give birth.

Calving (birthing) season for the Masai Mara’s resident animals is between December and January. It’s a time when surface water is plentiful and wildebeest, zebra and antelope give birth to their calves, foals and fawns. With so much easy prey around, it’s also a good time for predators to raise their cubs and pups, making a December safari fantastic for photographic opportunities.

Thanks to the Mara’s abundant resident wildlife, temperate, climate and wide-open plains, there’s virtually always something to see, no matter what time of year you visit. But an African safari in December will also offer you low-season prices and lower visitor numbers. 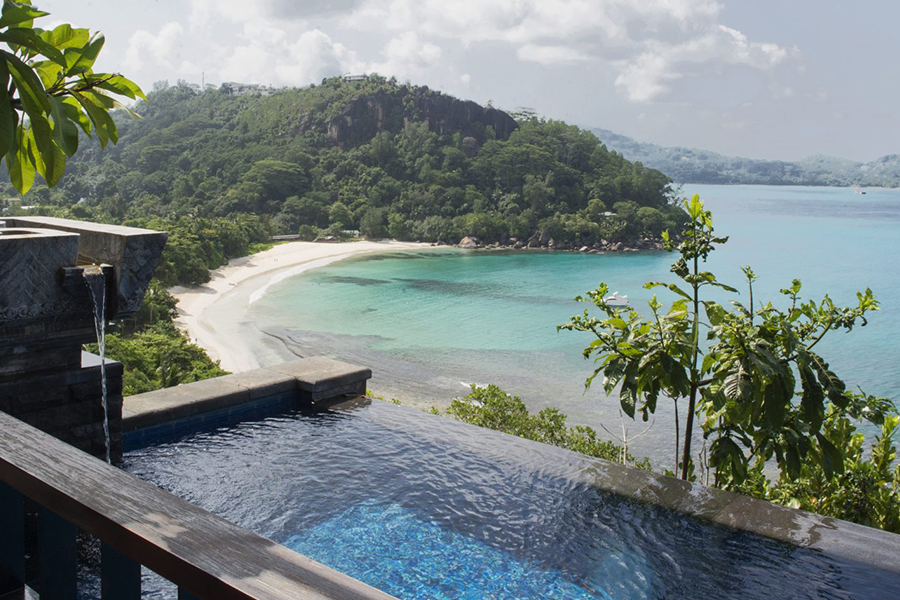 Not much beats Christmas in Africa in a hammock under a gently waving palm tree. Enjoying some R&R in a tropical paradise is simply the best way to crown your African safari in December.

In some cases, you can sip coffee at your safari camp in the morning and enjoy a cocktail that same evening on a tropical beach. But choose your island carefully, as the summer rains are starting to fall across the Indian Ocean islands. It’s not day-ruining weather, but cyclone season generally starts from about January and some places are drier than others – it's always a good idea to check with your Africa Safari Expert.

Here are our recommendations for where to go on African beach holidays in December:

Home to some of the world’s finest beaches, award-winning resorts and super-stylish villas, the Seychelles weather is generally warm and beach-perfect all year round, with December to April being the hottest months.

Diving and snorkelling conditions are good and if you’re looking for unbeatable exclusivity, one of the Seychelles private island resorts is where to go in Africa in December. Furthermore, thanks to easy logistics and its location, the Seychelles is a great add-on to an East African safari in December.

Always a firm favourite for active travellers and families with children, this twinkling jewel in the Indian Ocean offers powder-soft beaches, warm waters and glorious weather year-round. The best time to go to Mauritius is from May to December when it’s cool, dry and sunny. Regular flights make Mauritius a fantastic add-on to a Southern African safari in December.

Thinking of Visiting Africa in December?

Africa’s most popular destinations are busy and some summer rains are getting started. But with good deals and more of the bush to yourself, Africa in December offers plenty of opportunities to enjoy a classic game-viewing safari or go off the beaten path. Several destinations are at their most enticing and there’s a sense of excitement as the end of the year approaches.

Get in touch with our team of Africa Safari Experts to help you plan an unforgettable trip to Africa in December: