Africa is home to a diverse range of flora and fauna, hosting a greater abundance of diversity in species than any other continent on Earth. Unfortunately, as human populations grow, so does urban expansion and demand for resources - this paired with illegal wildlife trade threatens the existence of many animals. Thankfully, many of Africa's affected wildlife populations are now preserved in reserves and national parks. The gargantuan efforts of conservationists, rooted in principles of sustainability and education, has aided the survival of many species that have been on the brink of extinction.

When booking through Go2Africa, you are directly supporting these vital initiatives, making your travel spend matter! Even amid all of Africa’s dizzying list of safari-heavy hitters, including the Big Five, there are some animals that only a few safari travellers are lucky enough to spot. Here are some of the most endangered animals in Africa, and where you may have the unique opportunity to encounter them. 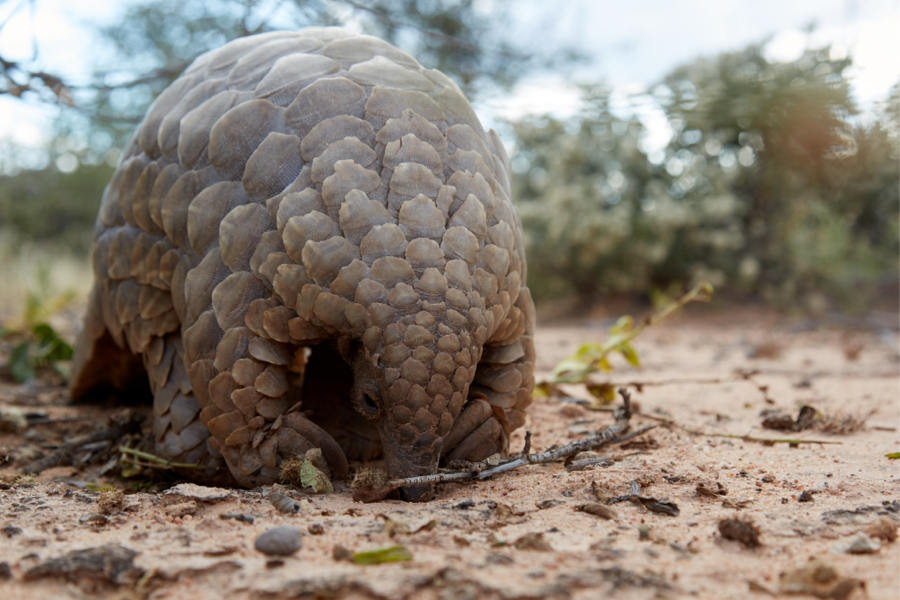 Four species of pangolin are found in Africa, south of the Sahara Desert: the Temminck’s Ground pangolin, the white-bellied pangolin, the Giant Ground pangolin, and the black-bellied pangolin. Pangolins are the only species in the world covered in these hard, reptilian-looking scales. These extra-ordinary looking mammals have long, sticky tongues that they use to devour ants and termites, and they can quickly roll themselves into a tight ball if they feel threatened.

The pangolin is one of the most-trafficked species in the world and are critically endangered - its meat is considered a delicacy and its scales (which is nothing more than keratin) is being used in traditional medicines. On safari, you’ll see pangolins typically digging on the ground for their primary food source, although they are known to be adept tree climbers. Nocturnal and extremely shy, consider yourself extremely lucky to see one of these rare animals in Africa. 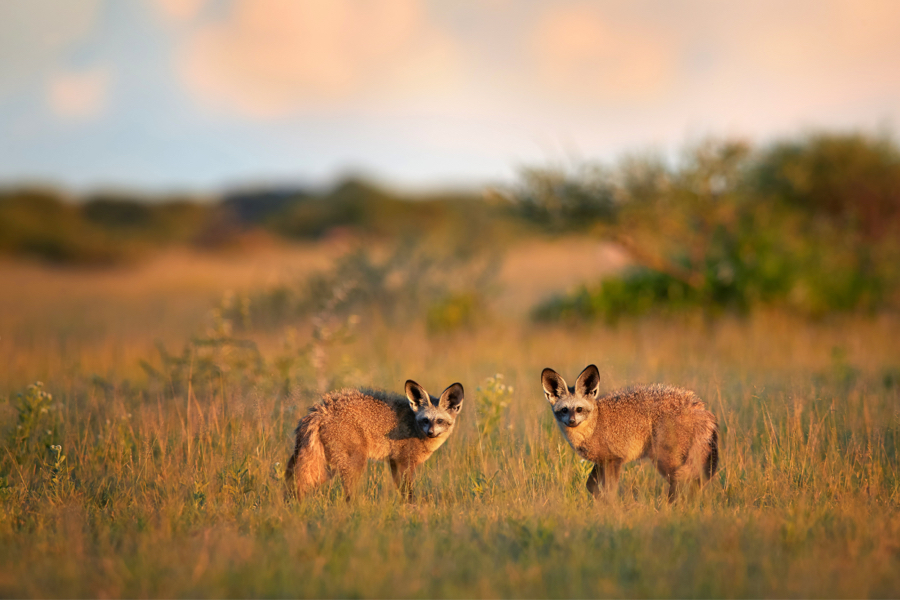 The bat-eared fox is known for its enormous dish-like ears and beautiful grey-black patterns. Their ears are impressively large at 13cm in height, and they can pick up the movements of insects underground. Bat-eared foxes live in family groups with their pups, having a litter of three to six puppies once a year. Interestingly, males are just as involved in guarding, grooming, and playing with the young as the mother is.

Their population is under threat because of human development encroaching on their habitats, making them one of the most endangered animals in Africa. Bat-eared foxes are mostly found in arid and semi-arid environments, but their population distribution has expanded to include the Cape Peninsula and Cape Agulhas in South Africa -plus, there are thriving populations on private reserves like Samara Game Reserve. 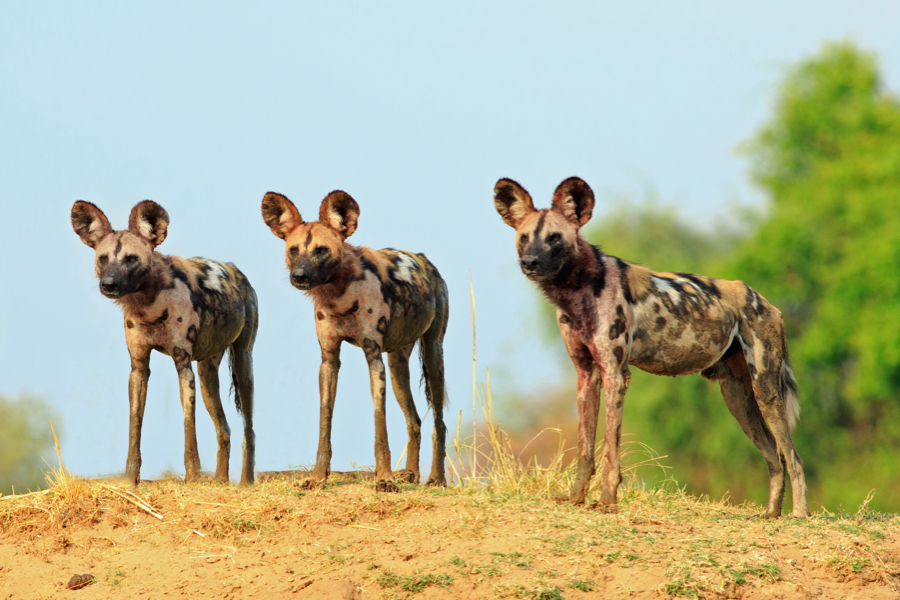 With only roughly 6000 wild dogs left in the wild, African wild dogs are critically endangered and are one of the rarest animals on the continent. Described as the ‘painted wolf of Africa’, these dogs form part of intricate social groupings. They operate as families with specialized forms of communication, protecting the weaker members of the group, and work each other up into a frenzy before a hunt – they are nothing short of prolific in their hunting abilities. Plus, they have incredible hearing because of muscles that allow their ears to swivel.

You may get a chance to see them hunting in their packs, dozing in the shade of trees, or hearing their distinctive howl and yipping vocalizations. African wild dogs are mostly found roaming the broad plains and sparse woodlands of sub-Saharan Africa. Despite a common misconception and their similarity in appearance, the aardvark is not related to the anteater. The Aardvark lives in various ecosystems from savanna terrain to dense forest and is one of the most endangered animals in Africa. Certain locations in the semi-arid regions of southern Africa are renowned for their sightings.

Aardvarks are a keystone species, meaning they are animals that serve an important role in balancing any ecosystem they habituate.  If a keystone species is lost, the sustainability of an ecosystem is threatened.  Snakes, lizards, hyenas, and wild dogs often use the holes dug out by the aardvark to keep warm during colder seasons - this has earned the Aardvark its nickname, the ‘Architect of Africa’. The only chance you will really have to see them is on a night drive, ideally in open terrain and during winter. 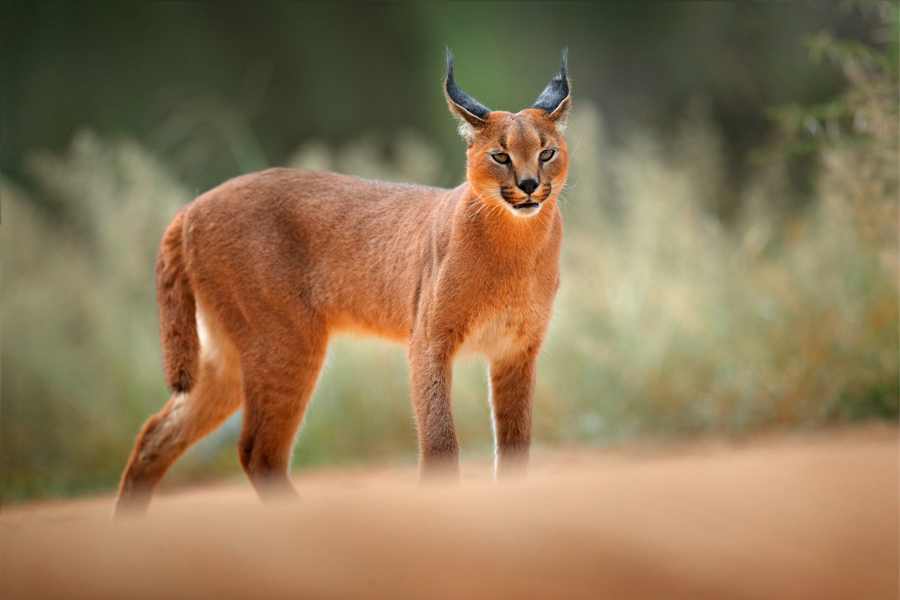 Caracals are brilliant hunters, able to launch themselves up to 16 feet (5 metres) into the air on the hunt for flying prey. Their muscular bodies make them excellent climbers, aiding them to retreat into tree canopies for shelter from predators or the heat. They can be found in dry savannah and forest habitats, as well as scrubland and rough terrain in mountainous places, where they have been recorded to live at altitudes of up to 9000 feet (2,750meters).

Caracals have been threatened by human-wildlife conflict but with collaring, more data can be retrieved to track and help protect these rare African animals. In Cape Town, you could be lucky enough to spot them roaming Kirstenbosch Botanical Gardens, on the hiking trails of Table Mountain, or see the Camp’s Bay caracal celebrity – Hermes - a timid and frequently spotted juvenile male. 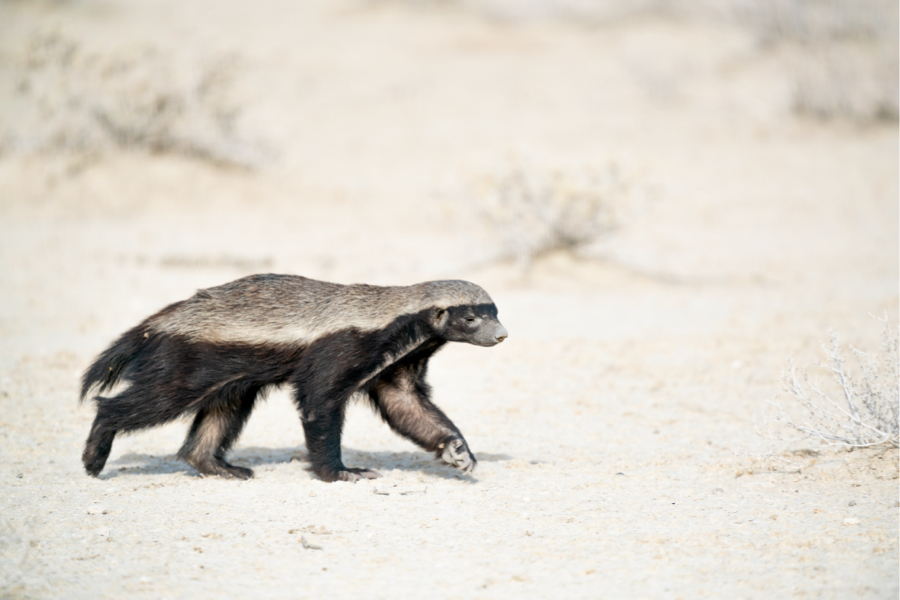 African honey badgers are revered as fearless predators despite their cuddly appearance. They have powerful jaws and have evolved defense against their unforgiving environment. Emitting an odour, they are able to escape from larger animals. Honey badgers are formidable, known to have taken on enormous, horned antelopes that are more than ten times the size of them, quilled porcupines, and even deadly snakes like the Cobra. They're also tenacious hunters, prepared to travel up to 20 miles for a meal.

Honey badgers can be found in Sub-Saharan Africa and South Africa. They inhabit various types of biomes, forests, deserts and mountainous areas. In South Africa the population of honey badgers is widely distributed, except the north-west coastal areas. 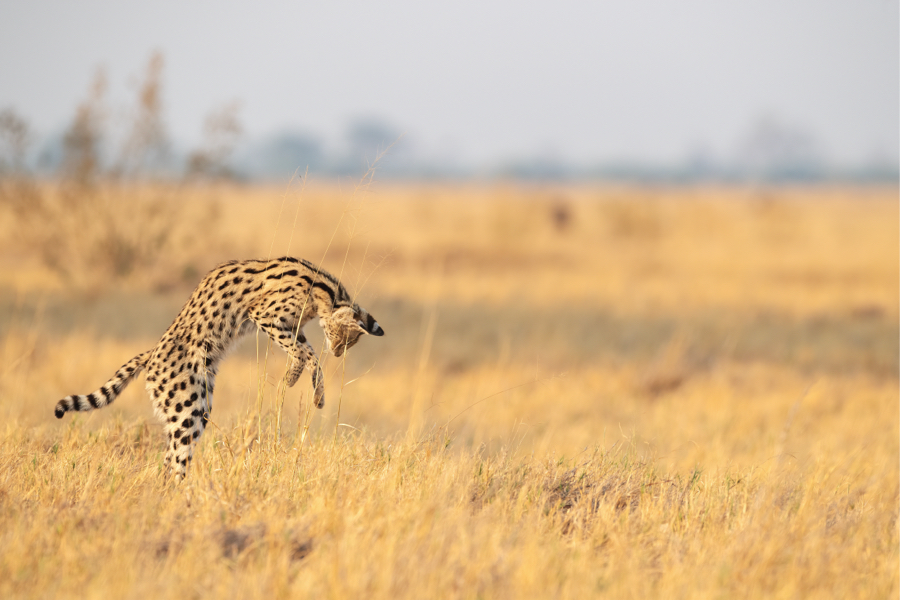 Servals are known to be solitary cats that roam freely and only come together in pairs during the mating season. They have tawny coats, spotted in black, with long legs that allow them to scout through grass plains for prey. Servals are native to more than 35 African countries but despite their extensive population distribution, they are thought to be one of the rarest animals in Africa - making them almost impossible to spot on a safari.

They have been found in national parks and reserves, but little is known about its existence outside of these protected regions, particularly in Northern Africa. The best place to see a serval is in the Serengeti at sunrise or dusk, and the Namiri Plains of Tanzania is home to large serval populations that slink about the tall grasses. 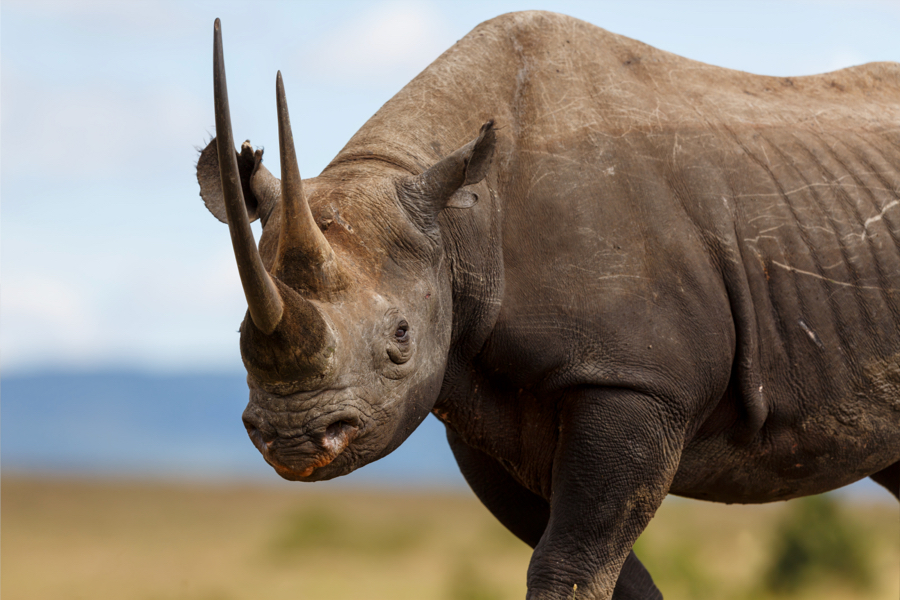 Black rhinos are smaller than white rhinos, with bulls weighing up to 1200 kg (2645 pounds) and cows weighing around 800 kg (175 pounds). The pointed upper lip of the Black Rhino also distinguishes it from the White Rhino. They can move at speeds of up 55 km/h - a spectacle to witness first-hand.

Sadly, with only approximately 5000 black rhinos left in the wild, they are considered critically endangered. Their population is threatened by illicit wildlife trade and increased poaching. Anti- poaching units across the continent are actively working to protect these vulnerable animals and their efforts are nothing short of heroic. The African civet can be found throughout southern sub-Saharan Africa, camouflaged by their black-brown fur coats in the grassy plains. African Civets are most frequently found in tropical woods and jungles, as well as other densely vegetated environments that provide both cover and prey. They gravitate to water sources where they are most likely to be seen at night on their nocturnal routine.

The perineal glands of an African civet secrete a fluid called musk, which is one of the most striking features of the animal. When they rub their bellies on the ground, they are marking their territory. African civets are hunted for their musk, which is a common component in many perfumes. Despite this, their population has stabilized but still needs to be protected from poaching threats. 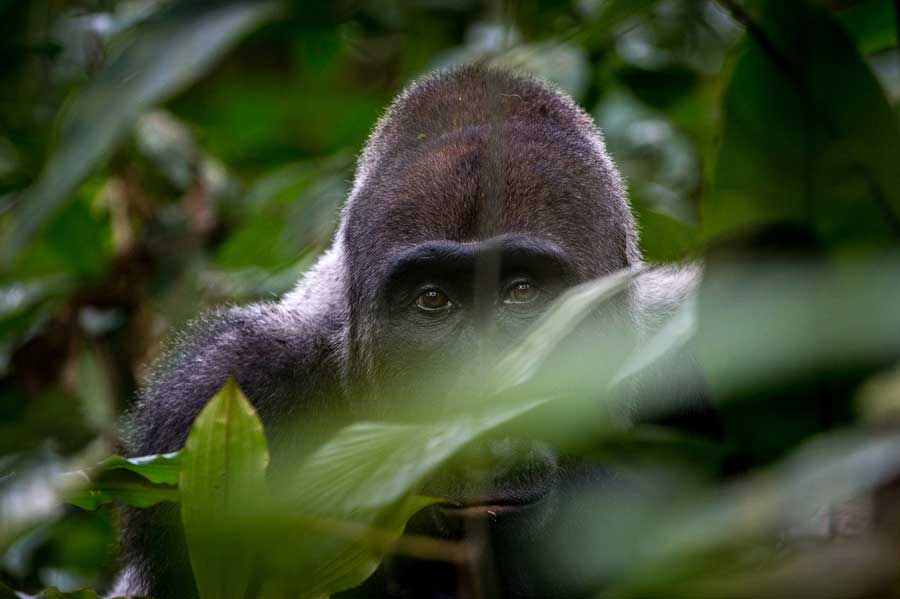 Gorillas are highly intelligent creatures. In the wild, they have been observed adapting to their environment by using sticks to gauge water depth, and using bamboo as ladders to help infants climb. Gorillas have the ability to feel a wide range of emotions, including love, hate, fear, pride, jealously, wrath, greed, and grief.  Gorillas use at least 22 different sounds, as well as body posture, face expression, body odour, and other means of communication. Because of their critically endangered status, gorillas are well known by rangers and can be individually identified by their unique personality.

Gorilla trekking is a sought-after experience in three African countries: Rwanda, Uganda, and the Republic of Congo. Seeing these enigmatic and magnificent creatures in their natural habitat is a once-in-a-lifetime opportunity. You'll be traveling through equatorial Africa's deep, unmarked forests, under canopies of trees and through a sanctuary to a myriad of teeming bird species. You will become immersed in the mountainside, humbled by the grand scale of the nature surrounding you; crackling earth beneath your feet, and scent of forest in humid air.

Chat with someone who's been there. Get in touch with one of our Africa Safari Experts to help tailor-make a wildlife safari that's right for you: