Botswana vs Kruger: Which is Best for Safari?

If you’re looking for the ideal African safari destination packed with excellent wildlife sightings, and fantastic lodges and camps, they don’t get better than South Africa’s Kruger National Park and Botswana’s Chobe National Park and Okavango Delta. Kruger is one of the biggest game reserves on the continent and well-established as one of the best safari destinations for first-time visitors to Africa. Botswana, on the other hand, is home to the magnificent elephant empire of Chobe and one of nature’s true masterpieces, the Delta. 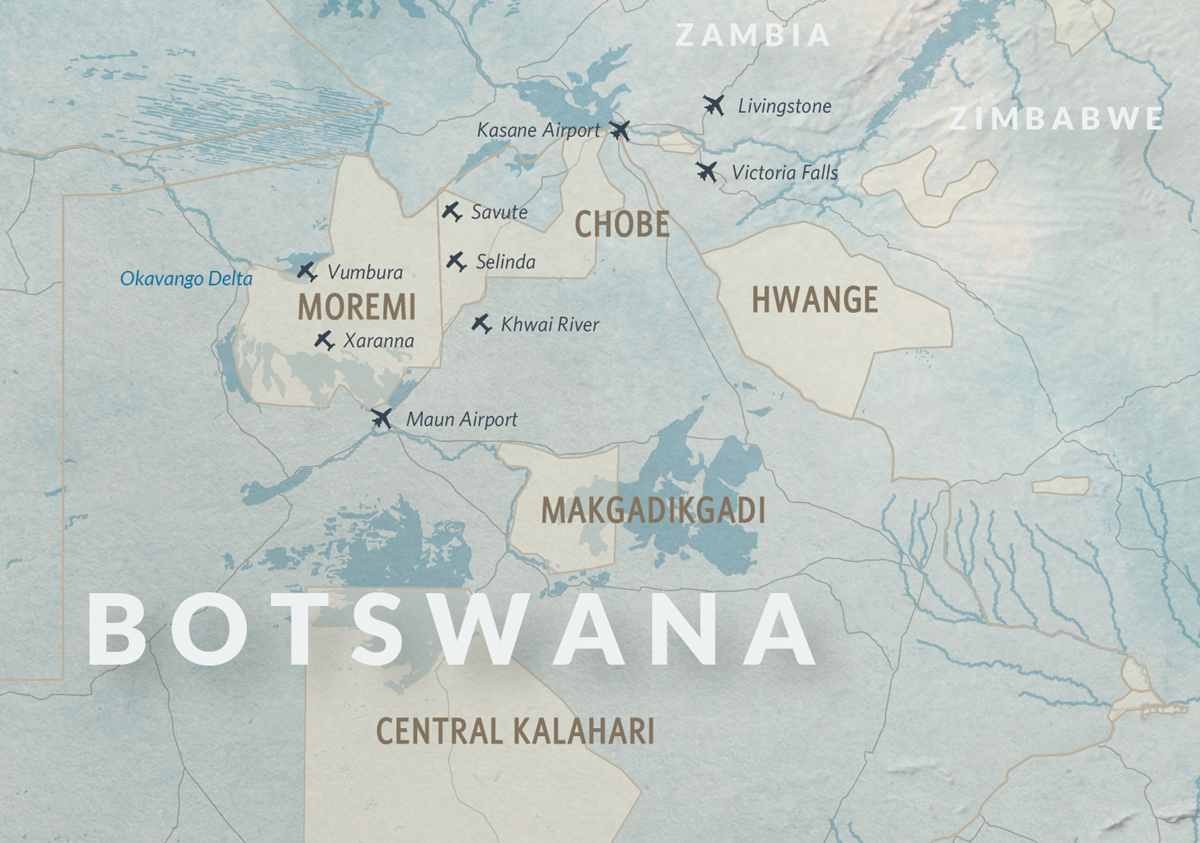 Landlocked Botswana is the 48-largest country in the world, about the size of France. Although more or less 70 percent of its mostly flat landscape is dominated by the Kalahari Desert, Botswana is home to one of the biggest inland deltas on Earth, the pristine Okavango.

The Okavango Delta as a Safari Destination

Arguably one of our planet’s last-remaining Gardens of Eden, the Delta is an emerald-green paradise in the middle of the Kalahari Desert and a World Heritage Site. Permanent wetlands situated in the north-western corner of Botswana, the Delta’s maze of channels, floodplains and woodlands are teeming with wildlife. Most of the eastern side of the Delta is protected by the beautiful Moremi Game Reserve.

Chief’s Island is at the Delta’s heart, a permanent dry land about a third the size of New York’s Long Island. It’s part of the Moremi Game Reserve and home to major predators, including rare wild dog.

Several private concessions are clustered around Moremi. These are clearly defined, exclusive-use areas of the Delta that are run by individual operators. Safari lodges in these private concessions offer game viewing as good as Moremi’s but with far fewer crowds, regulations and restrictions. You can, for example, drive off-road and at night to get to sightings. 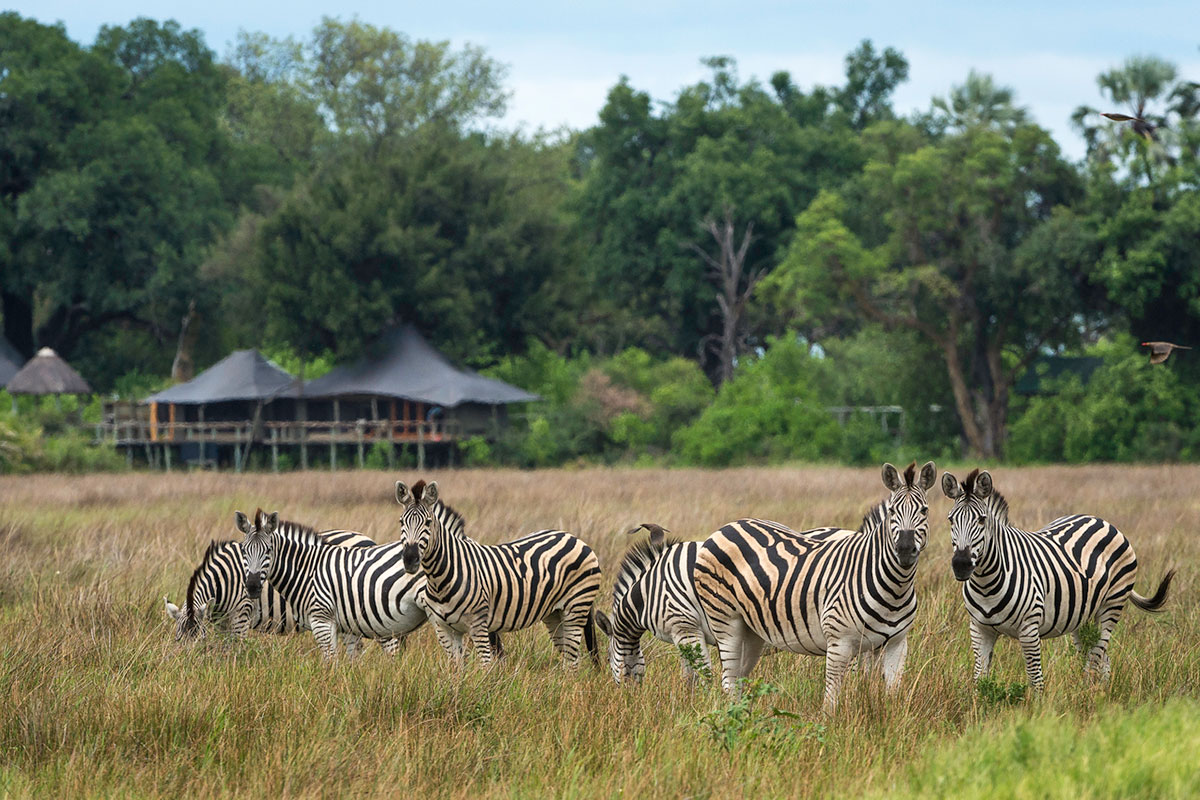 Botswana’s first and most biologically diverse national park is home to around 70 000 elephants – one of the biggest populations in Africa. Chobe can be divided into three distinct areas: 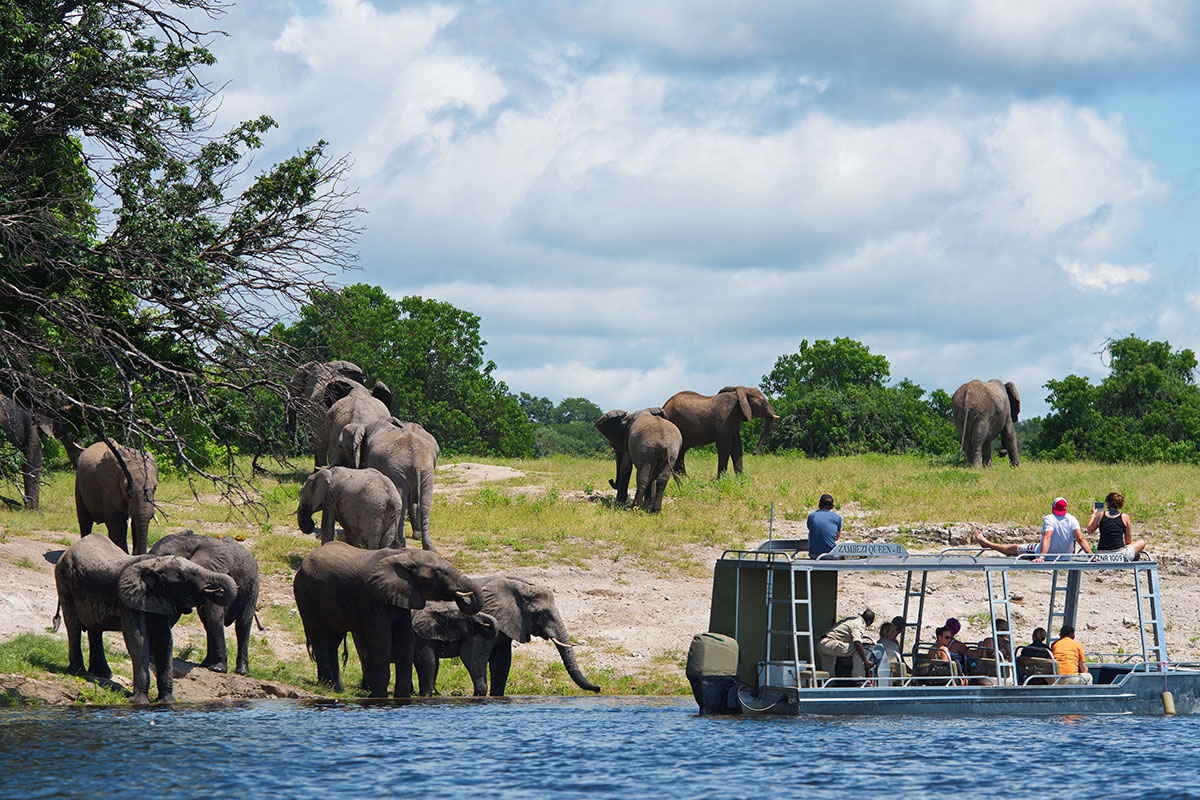 Watching elephants on the ‘Zambezi Queen’. 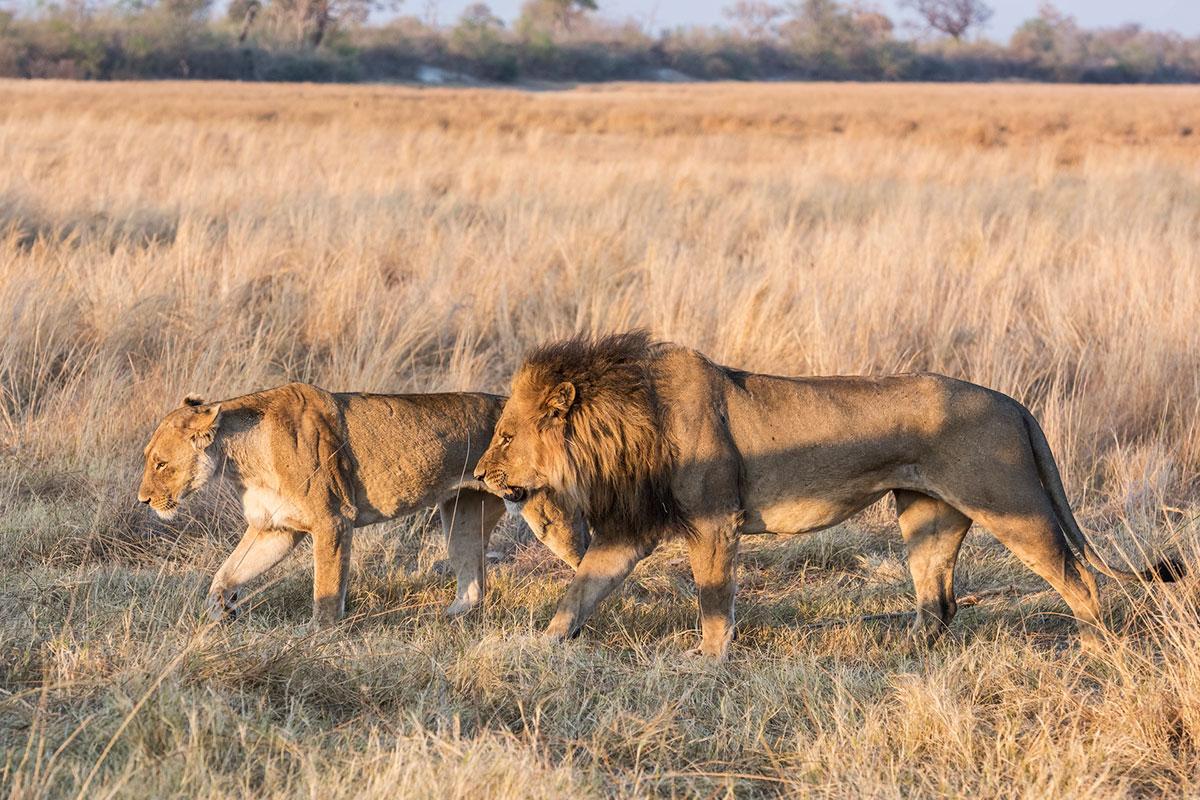 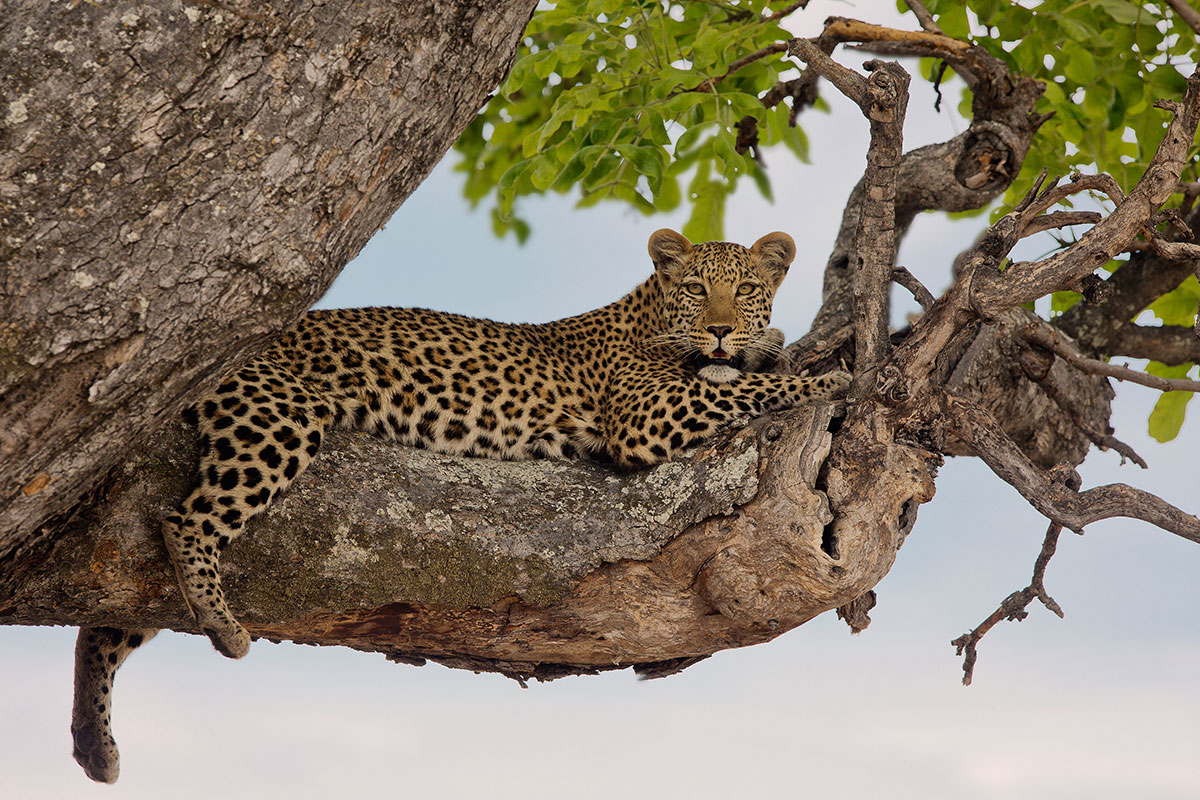 Leopard at Kwando Lagoon in Linyanti.

The Kruger National Park as an African Safari Destination 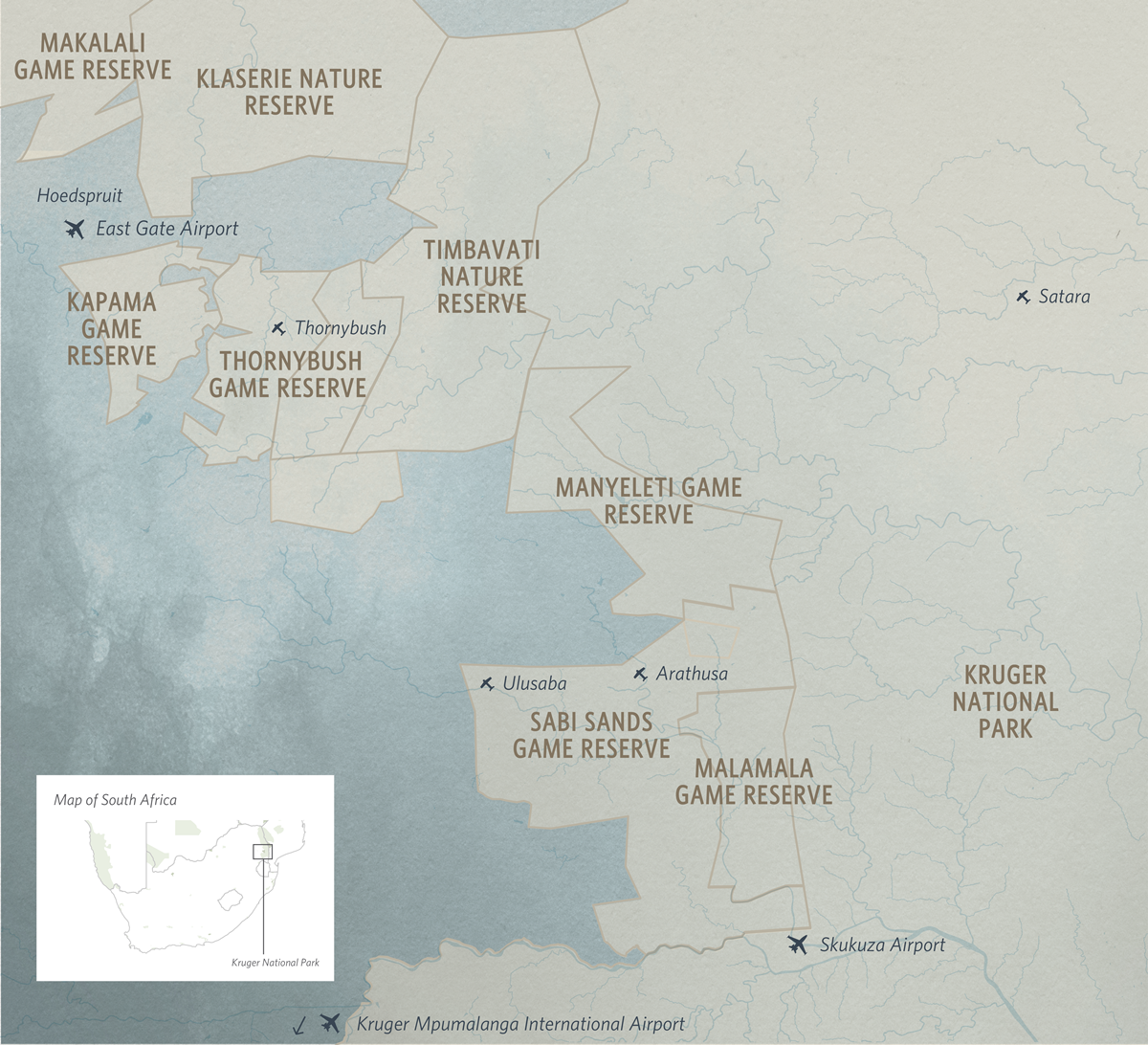 This legendary park lies in the north-eastern part of South Africa and is one of the continent’s biggest game reserves – almost the size of Israel. It was first proclaimed a protected area in 1898 and is now part of the Great Limpopo Transfrontier Park, a peace park (transboundary protected area) that links up with the Limpopo National Park in Mozambique and Zimbabwe’s Gonarezhou National Park. Kruger also shares borders with private reserves like Thornybush, Sabi Sands, MalaMala and Timbavati.

The Kruger is synonymous with thorny acacia trees along its rivers, and many marula and mopane trees. The eastern half of the park is the most important grazing area, providing red and buffalo grass species as nourishment for its resident herbivores.

The Limpopo River is Kruger’s natural northern border with Zimbabwe, while the Crocodile River is the park’s southern boundary. The Lebombo Mountains to the east separate the park from Mozambique. To the west lies Phalaborwa, the only town in South Africa that borders the Kruger, and Nelspruit which is home to Kruger-Mpumalanga International Airport. 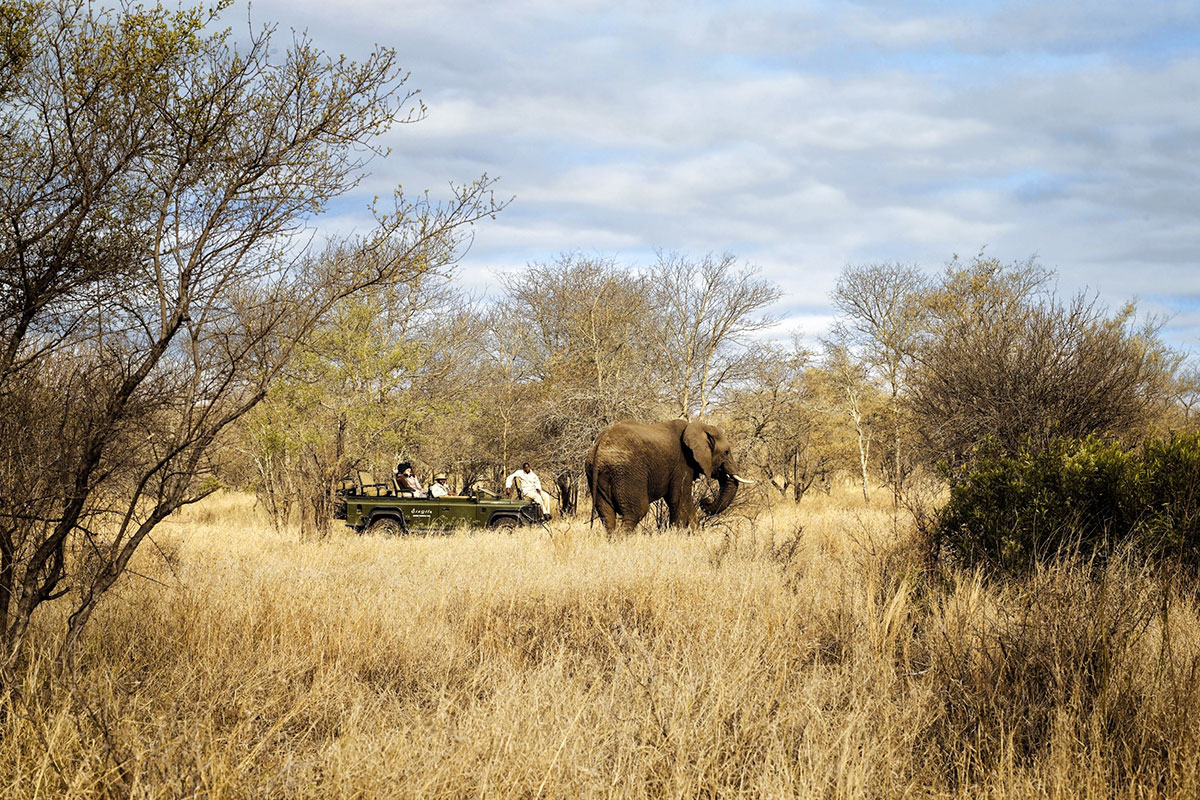 Watching elephants in the Singita concession of the Sabi Sands.

It’s really tricky to give exact costs for any safari. There are many variables that can influence your budget like:

The general rule of thumb is, the more budget you have available for your safari, the more private and exclusive you can go. Other than personalised service in luxurious camps and lodges, the biggest benefit of staying in a private concession is the quality of game viewing that you will enjoy. National parks can get extremely crowded, especially during peak safari season, and most of the time you’ll have to share animal sightings with other vehicles and groups. A private safari means you have access to a private guide, vehicle and an exclusive-use piece of wilderness to explore. You’ll also be able to go on guided walks and spot-lit night game drives – activities not allowed in the public parks.

The following tables provide approximate costs for a safari in Botswana and the Kruger. These estimates are based on a price-per-person-per-night, including accommodation and transfers:

INSIDER’S TIP: In most cases, a safari in Botswana is more expensive than one in the Kruger, as you can usually only fly between destinations like the Okavango Delta and Chobe. You will however, be immersed in one of Africa’s last remaining untouched wildernesses. 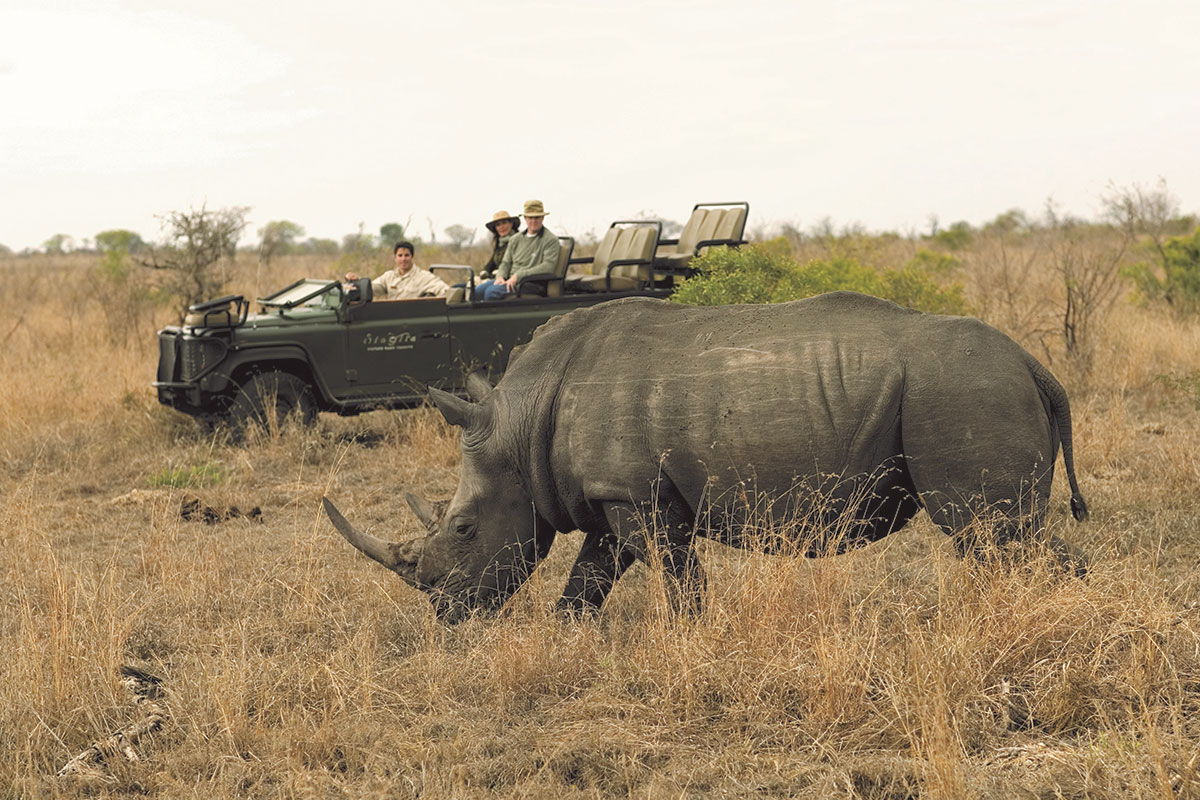 You will find some of Africa’s most beautiful and luxurious safari lodges in Botswana, as well as remote and wonderfully authentic tented camps. Situated in prime wildlife areas, Botswana’s safari accommodation delivers high standards of service, dining and guiding. Chobe and Moremi offer land-based safari lodges, while the rest of the Okavango Delta is synonymous with water-based accommodation.

There is only one lodge situated in Chobe National Park, Chobe Game Lodge, and several private accommodation options available in the Chobe River, Savuti and Linyanti areas.

Whether you’re looking for private butlers and copper bathtubs or zero Wi-Fi connectivity and hot-bucket showers, Botswana has it all. Here are some of our favourite options:

From $665 per person sharing

The best way to experience the magic of Kruger is to stay in one of its private reserves or concessions. Excellent service and fine cuisine go hand in hand at the exclusive camps and lodges – some of which have won international awards. The Kruger National Park also offers affordable tented camps, self-catering rest camps and family-friendly lodges. Most of the accommodation is spread out across the park and its neighbouring private reserves. Our favourite options in the Kruger are:

From $840 per person sharing

Both Botswana and the Kruger are world-renowned wildlife destinations that offer classic, heavyweight game viewing – especially the iconic Big 5. While you’re very likely to see lion, leopard, elephant, rhino, and buffalo all in the same day in the Kruger, you might have to search a little longer for them in the Okavango Delta’s Moremi Game Reserve. 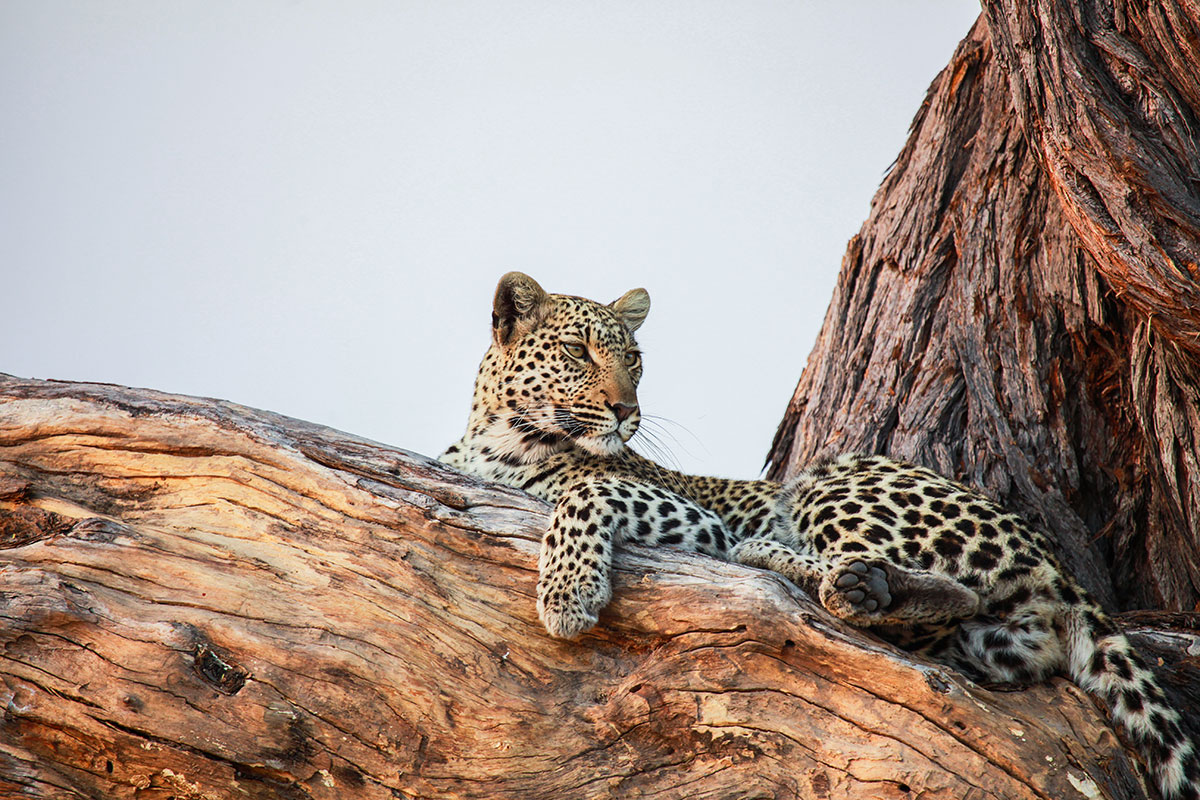 Leopard at Kwando Lagoon near Linyanti.

INSIDER’S TIP: Because Chobe is a national park and home to one of the biggest elephant populations in Africa, it can get extremely crowded during peak safari season. The Linyanti area’s three private wildlife reserves (Linyanti, Selinda and Kwando) offer a more exclusive experience and activities that are not permitted in the national park – like nature walks and night drives.

Morning and afternoon game drives are par for the course in Botswana and the Kruger National Park. Professional guides take you out into the wilderness in 4x4 vehicles, track animals and identify and explain what you see. You’ll have more activities available in a private reserve that are not permitted in the national parks – like off-road driving, guided nature walks and spot-lit night drives. 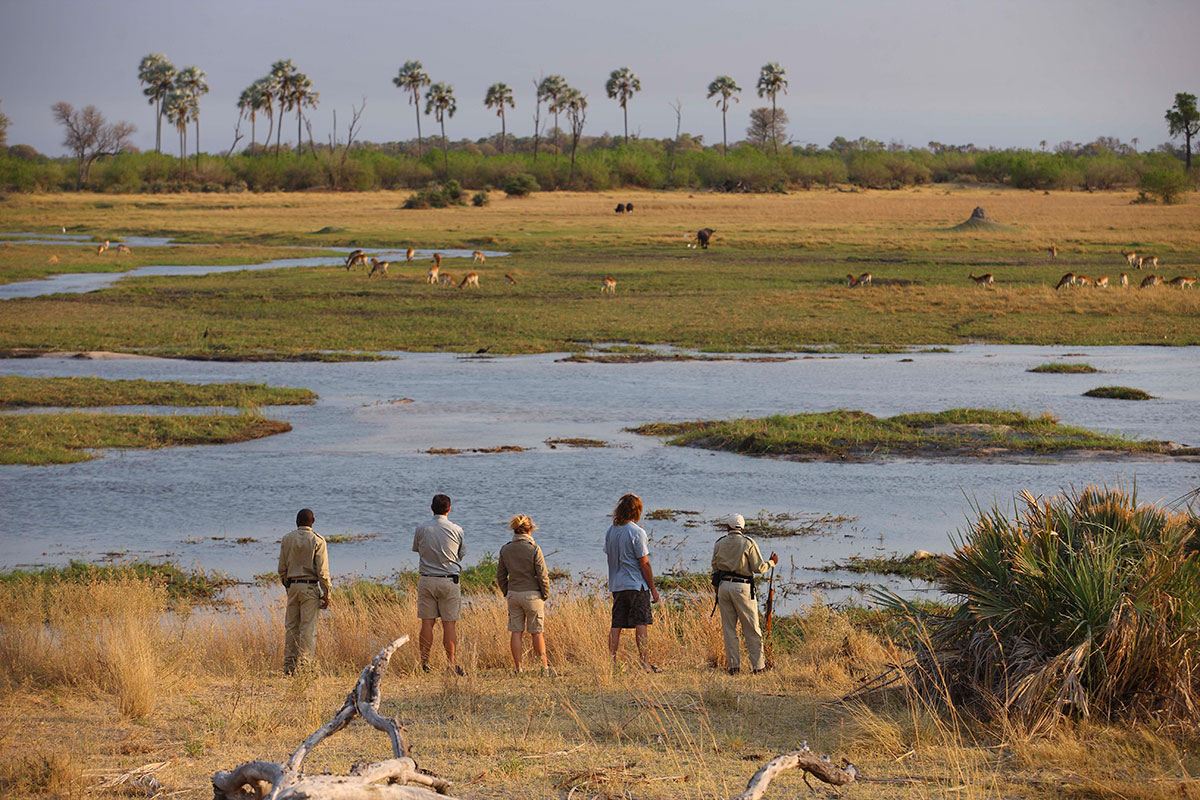 Walking at Sandibe in the Okavango Delta.

Many family-friendly camps and lodges in both destinations offer educational programmes for children. If you’re staying at an exclusive or private lodge, you might be able to try your hand at other activities like archery, interactive cooking classes with professional chefs, or sleeping out in the wilderness on a star bed. 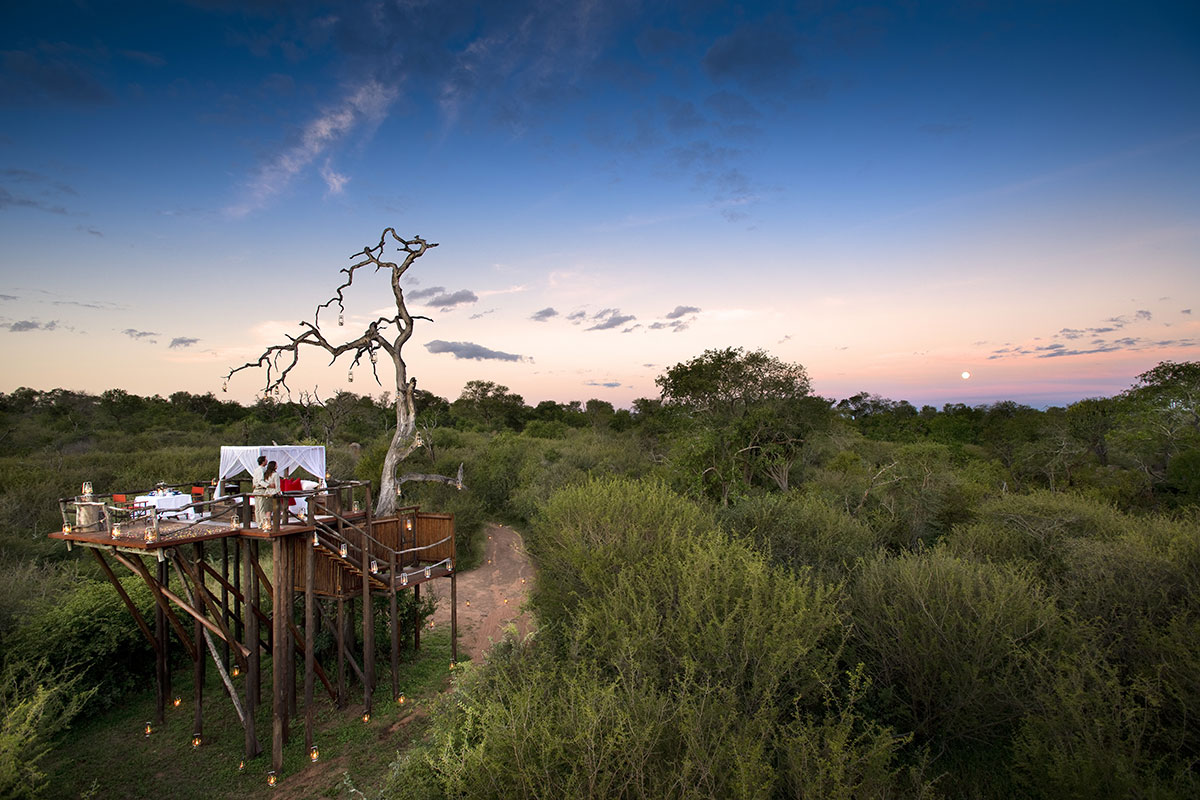 The Chalkley Treehouse at Lion Sands.

Activities only available in Botswana 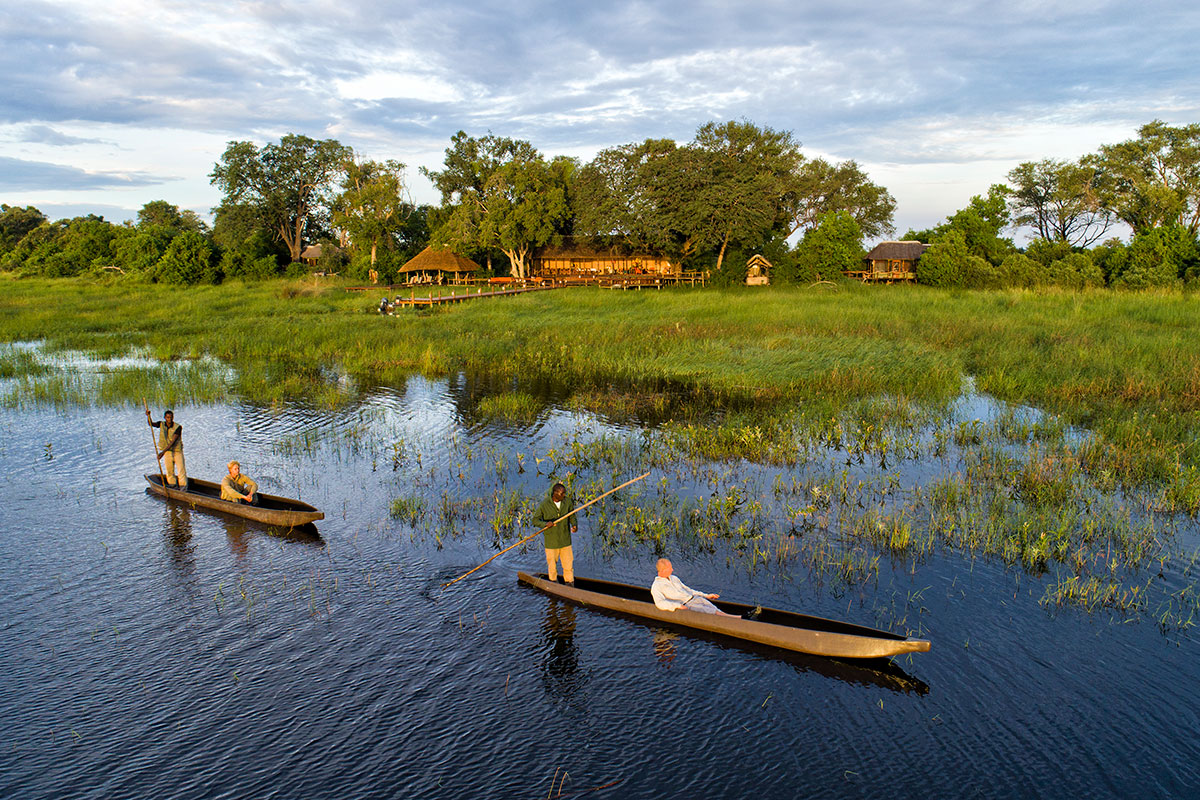 Mokoro rides at Mapula Lodge in the Delta. 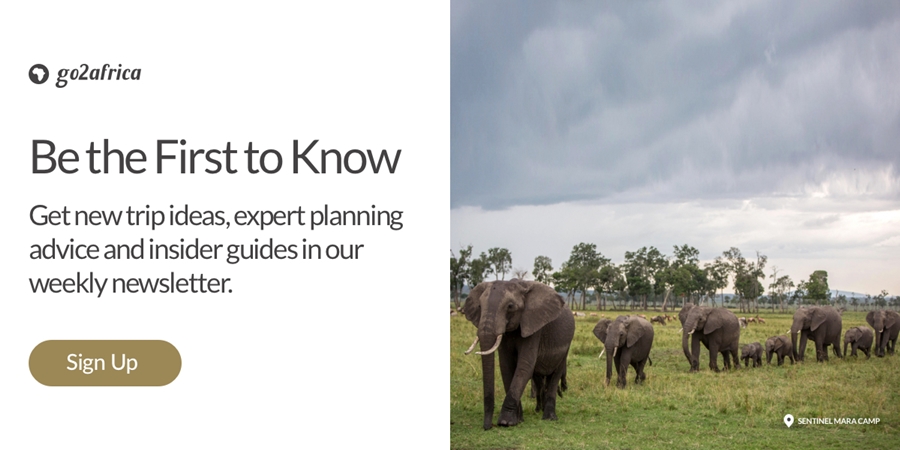 The Delta and Kruger are both fantastic year-round safari destinations thanks to abundant wildlife and permanent water sources. Bear in mind the Delta’s seasonal nature, so the best time for a water-based safari is during its high-water season (from about June to August). Kruger’s peak safari season is during its dry winter months (May to October), as animals are easier to spot in the low and scattered vegetation.

Most safari goers visit Chobe National Park during its dry season (from about May to October), renowned for large numbers of animals along the Chobe River and in the Savuti area. Chobe also offers sensational game viewing from August to October, but temperatures are very high during this time of year. 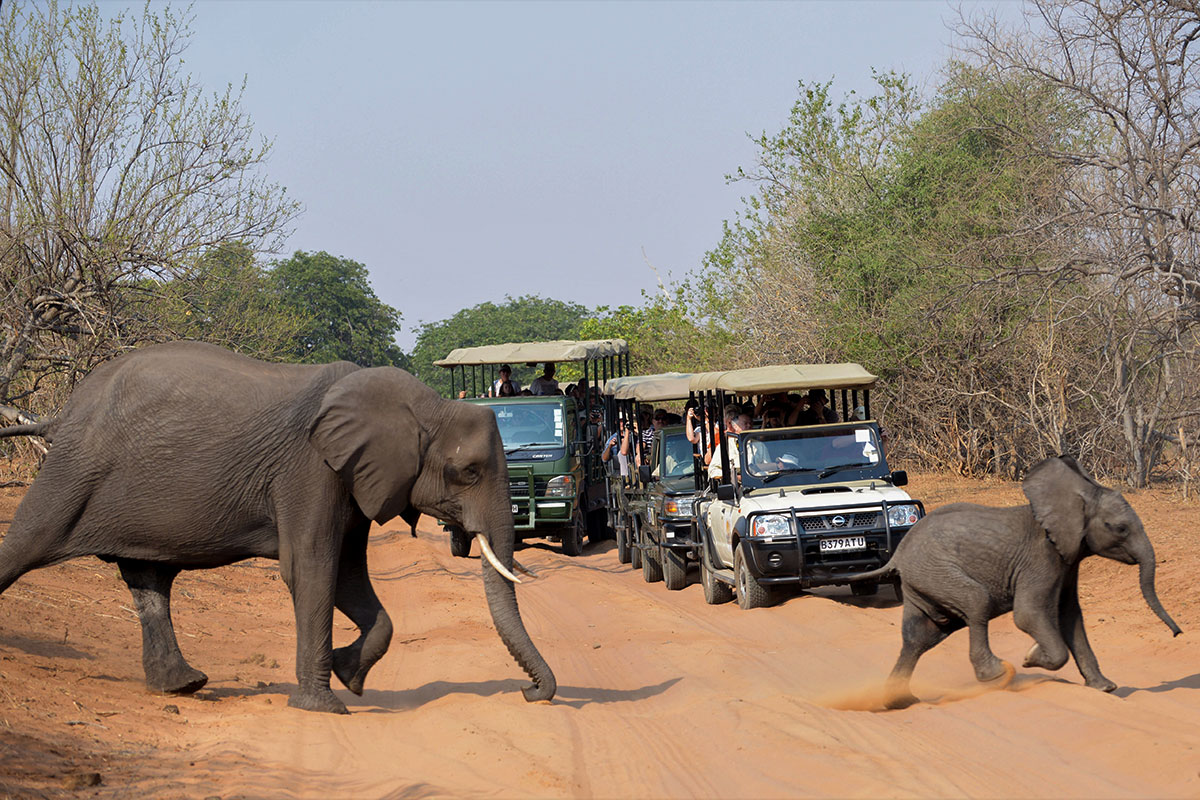 Whether you’re looking for a luxury safari experience or a rugged adventure, Botswana will deliver. It’s a great destination for multi-generational family vacations, but better suited for families with children older than seven. It’s a fantastic destination for avid birdwatchers and photographers. Wildlife enthusiasts will love the density and diversity of Botswana’s wildlife, especially in Chobe, while the luxurious and exclusive nature of Chobe’s safari accommodation means it's an ideal destination for honeymooners.

Whether you’re a first-time visitor to Africa or a veteran of many safaris, the Kruger will not disappoint. This country-sized park offers a wide diversity of wildlife and some of the finest game viewing in Africa. The Kruger also boasts international award-winning accommodation, smooth-running logistics, its very own international airport, and some of the best guides and trackers in the business.

It’s an excellent choice for safari first-timers and honeymooners. Family-friendly lodges offer specialised safari programmes for children, and you can expect luxurious suites and superlative service at the private camps and lodges. 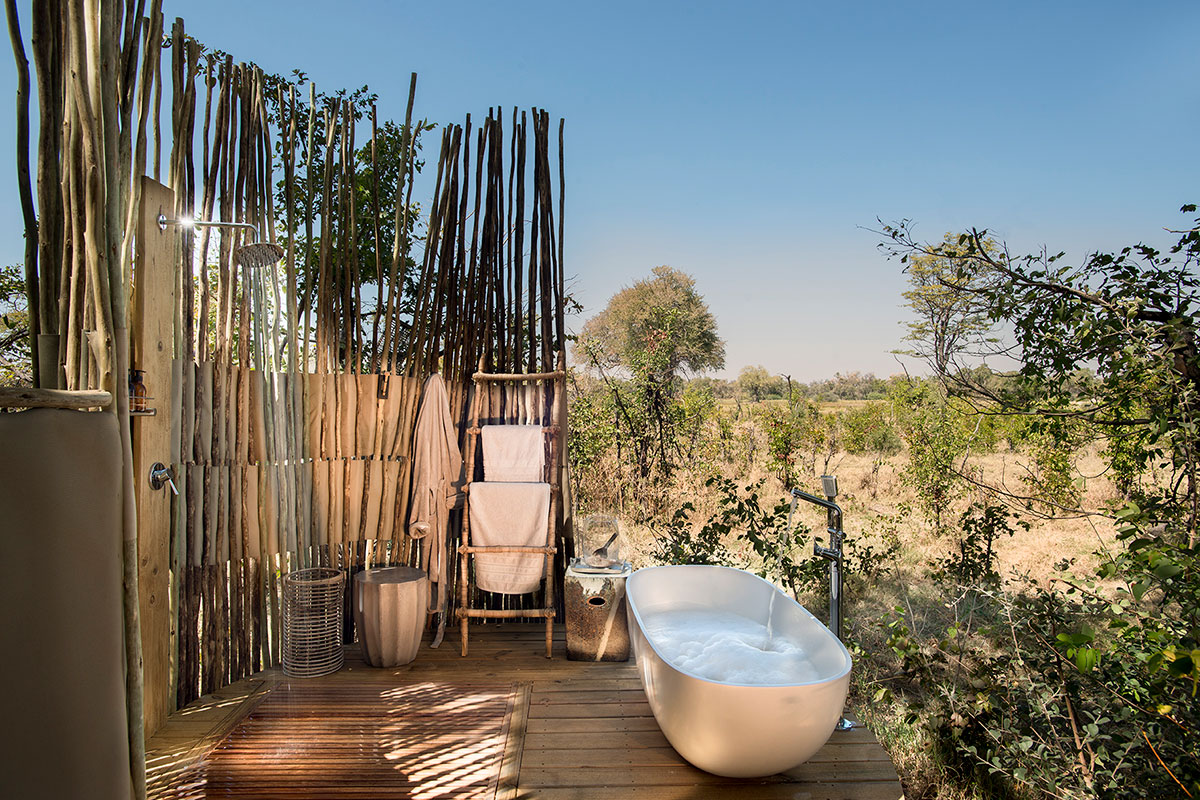 Both Botswana and the Kruger National Park are safe destinations and many travellers go on safari there every year. Go2Africa has been tailor-making Botswana and Kruger safaris for our clients since 1998 – here are our top tips when it comes to health and safety: 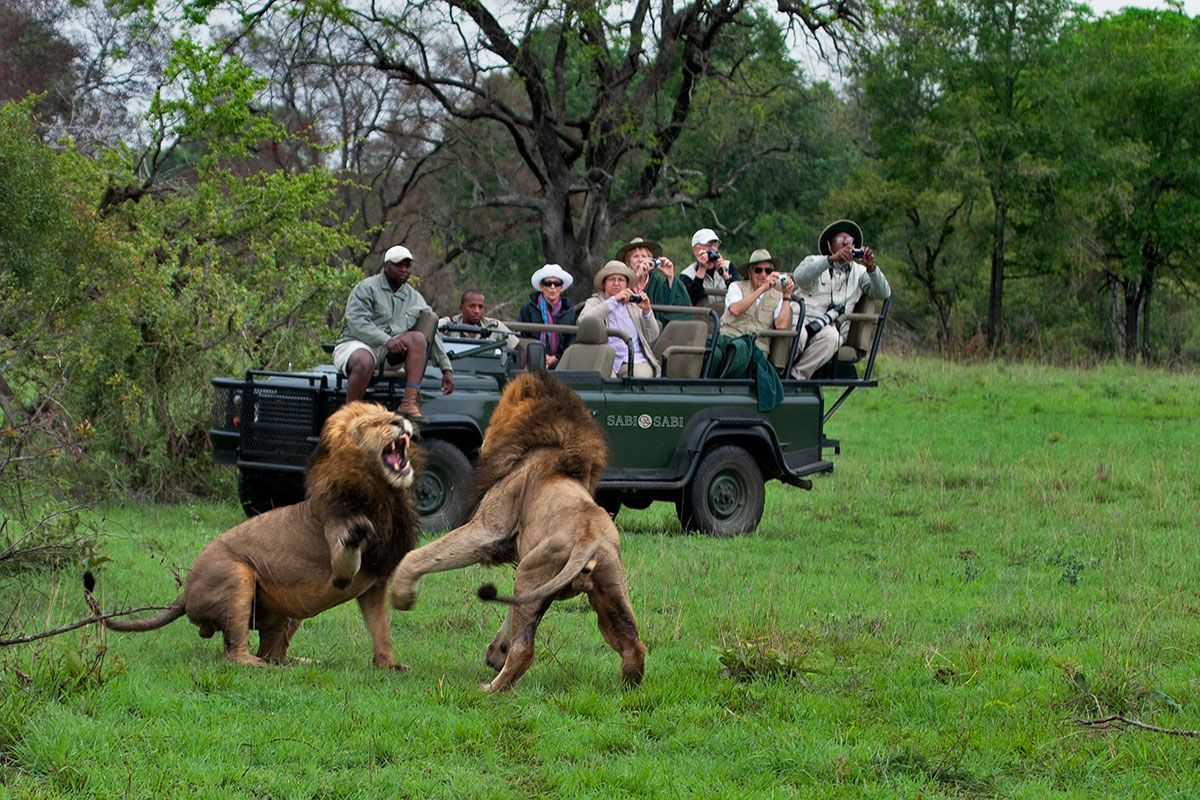 Because of their proximity to one another, Botswana and the Kruger are actually easy to combine in a Southern African safari itinerary. Sir Seretse Khama in Gaborone is Botswana’s main international airport, but almost all safari goers skip it and fly from South Africa’s Johannesburg to:

Kruger’s major airport, Kruger Mpumalanga International Airport, is located in Nelspruit and travellers can fly from here to destinations like Cape Town, Johannesburg, Durban and even Mozambique. The smaller Hoedspruit Airport makes it easier to get to the park’s private reserves like Thornybush, Sabi Sands and Timbavati, while Phalaborwa Airport serves the northern Kruger. 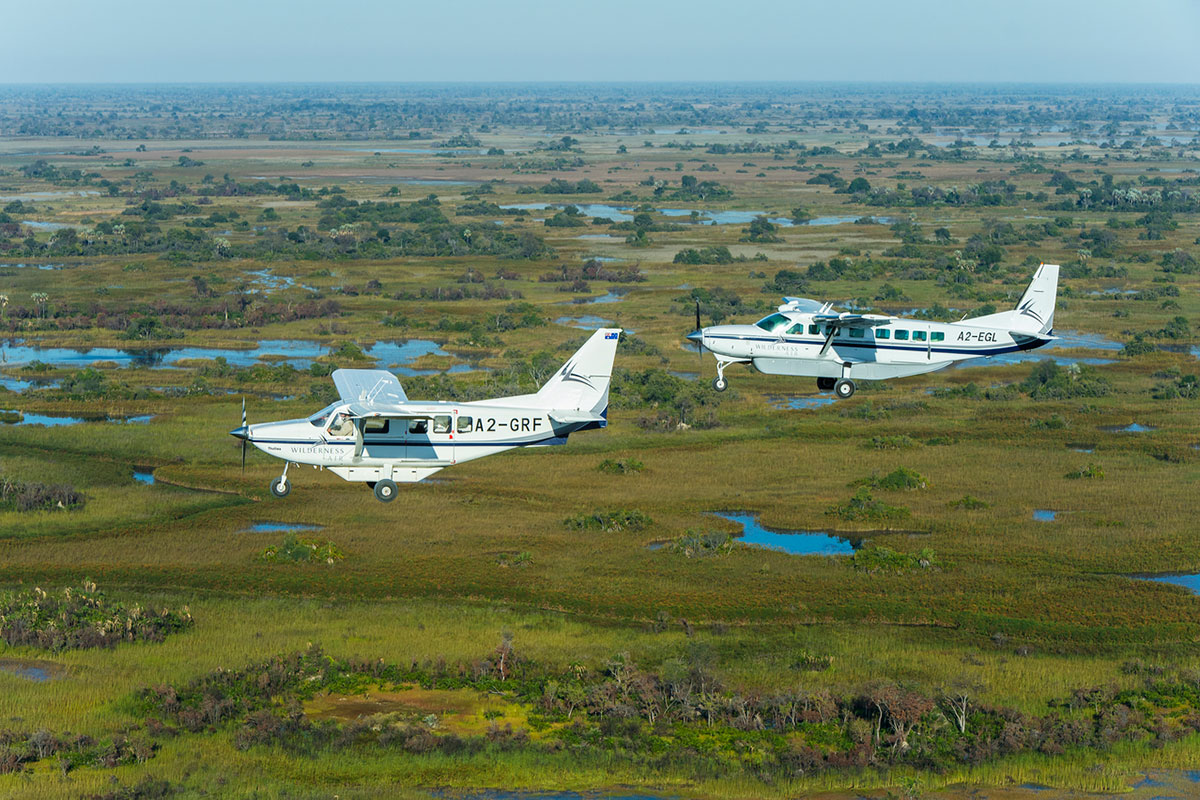 Light aircraft flying over the Delta.

All Go2Africa’s Botswana and Kruger safari itineraries are completely flexible around your budget and travel wishes. Get in touch with one of our Africa Safari Experts to start planning your dream vacation.