A pack of wild dogs (also known as painted wolves or painted hunting dogs) is one of the most thrilling sights to see on safari. Extremely rare but with a growing population, these canids embody all the characteristics we think of in predators: keen intelligence, fine co-operation, excellent hearing, great strength, great vision and sheer speed. The excitement when a guide announces that wild dogs have been spotted in the vicinity is palpable!

What to Expect if You Spot Them – On the Hunt

There is nothing to beat watching wild dogs on a hunt (they aren’t really wolves – this is just a different name for them). Individual dogs communicate by ‘sneezing’, indicating whether or not they are hungry, and whether they should go on a hunt. Once consensus is reached, the pack will silently approach their prey like a Thomson’s gazelle, a warthog, a zebra or a wildebeest, carefully surrounding it to block off escape route. When the animal realises that it is being stalked, the chase commences! And what a chase it is: wild dogs can reportedly reach speeds of nearly 70 kilometres / 44 miles an hour for up to sixty minutes at a time. 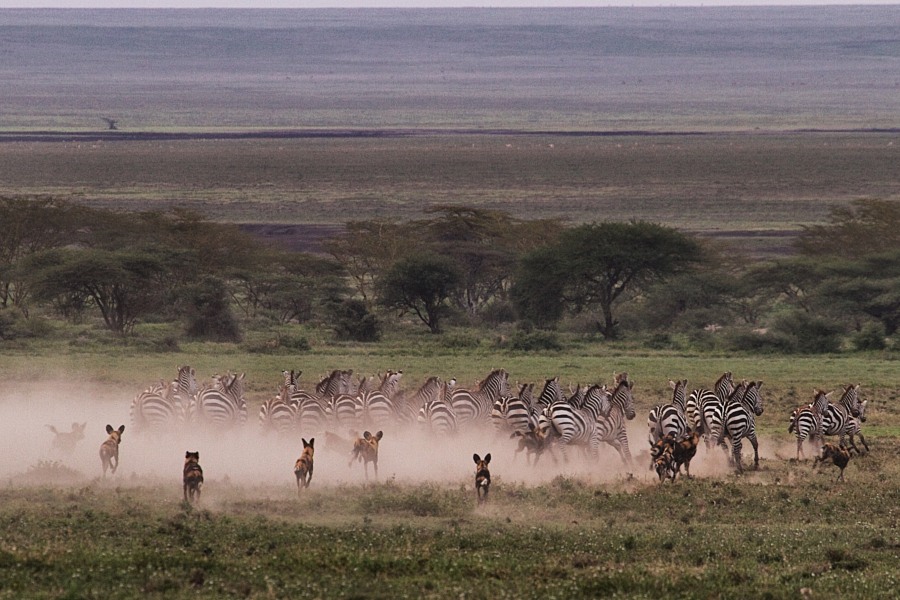 On the hunt for zebra near Serian’s Serengeti South in Tanzania.

The wild dogs communicate all the time during the hunt, telling each other where the quarry is. Because they are quite small and slightly built, they cannot rely on the brute strength that lions and leopards have to break their prey’s neck or slash the jugular – wild dogs will bite their mark’s legs and nose, wearying it down until the entire pack is able to overwhelm the animal and tear it apart. Once again, unlike their bigger feline cousins, wild dogs eat immediately. While leopards will often stash prey in a tree and lions will take their time, wild dogs devour their meal right away so that they aren’t vulnerable to opportunistic hyenas, jackals, lions and leopards coming along and chasing them off for the hard-own meat.

In strict hierarchy, pups younger than a year eat first. They have expended huge energy on the hunt and are the most vulnerable to being killed so must keep their strength up. Once they’ve finished eating, the pack will move on immediately. The smell of blood will draw other carnivores and wild dogs do not want to have to deal with lions, in particular. 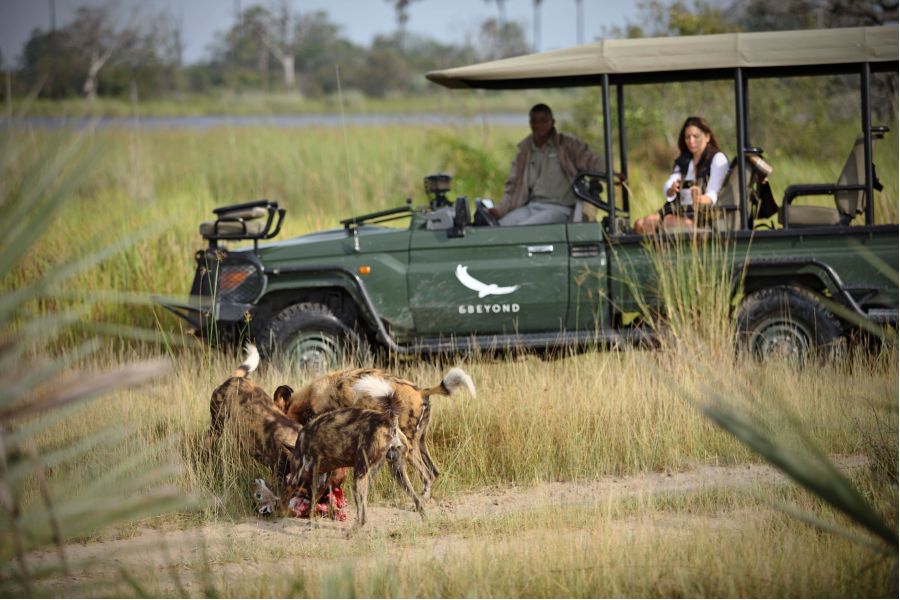 Pack with a kill at Nxabega in Botswana.

Of all predators, wild dogs are easiest to see on the chase because – like cheetahs – they hunt during the day. This is a boon to safari goers. Have your camera ready: they move fast and will duck under vegetation if necessary. In fact, its sometimes best just to put your camera down and live in the moment. Pack members fan out and it’s hard to focus on all of them at the same time. Just sit and enjoy having the privilege of seeing these incredible animals putting their astounding qualities to the test. Researchers suggest that at least eighty percent of chases end in a kill – the highest of all predators.

What to Expect if You Spot Them – Resting

What springs to mind immediately if you watch a pack resting is how similar they are to domestic litters and dogs. Puppies will play with sticks, practicing their hunting skills. The matriarch and patriarch (unusually, each pack has a dominant male and a dominant female) will keep and eye out, and lead the pack in hunting. There is cuddling, playful nibbling, chasing and stretching out. 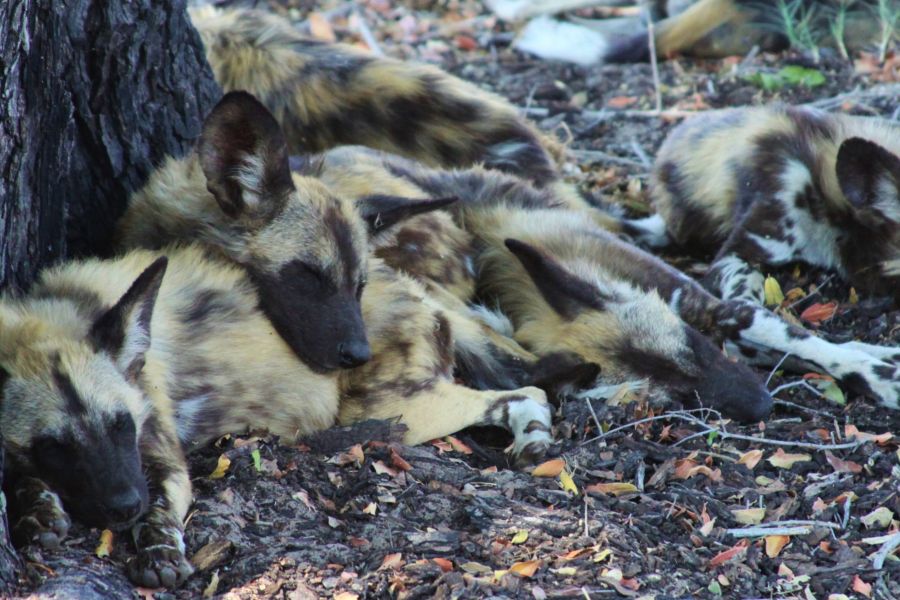 Sleeping pack in the Linyanti in Botswana.

Pack members are also known to sleep nestled together for safety and warmth. The youngsters especially are very curious and have been known to approach game-drive vehicles, sniffing every inch of the tyres and body. All animals in Africa will rest during the hottest parts of the day – look out under shrubs and trees for the best chance of seeing a pack as their mottled coats camouflage them extremely well. Their gold, white and black fur melds perfectly with dappled sunlight and you need sharp eyes to spot them.

The Best Places to See Them

Although wild dogs are found across Africa, with different sub-species in different regions, the highest known population numbers are currently in Botswana. Botswana has all the ingredients for a successful resurgence: a good conservation ethos, excellent habitat preservation and a low-visitor tourism model that keeps animals and environments as unstressed as possible. But there are plenty of other top safari destinations where wild dogs are making a resurgence and sightings are good – let’s check them out: 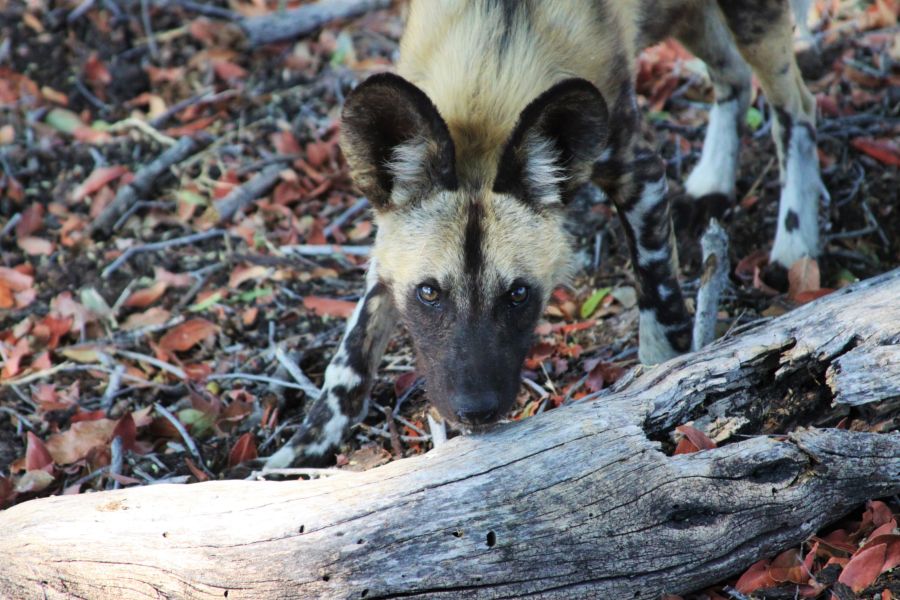 All ears in the Linyanti.

The Linyanti is an area in northern Botswana wedged between the border with Namibia, the Selinda Channel and Savute. The Linyanti Swamp is one of the most productive regions for excellent wildlife sightings.

From $885 per person sharing

From $670 per person sharing 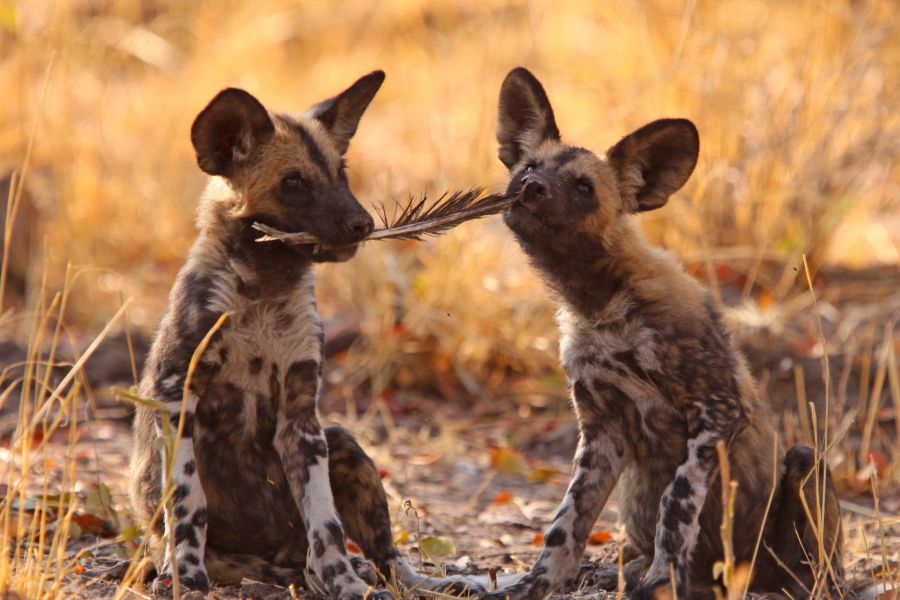 Adjoining Linyanti, Kwando is one of the largest private concessions in all of Botswana, giving guests complete privacy and exclusivity. There are only two lodges here and you have access to a phenomenal 232 000 hectares to explore virtually all by yourself.

From $800 per person sharing

From $760 per person sharing 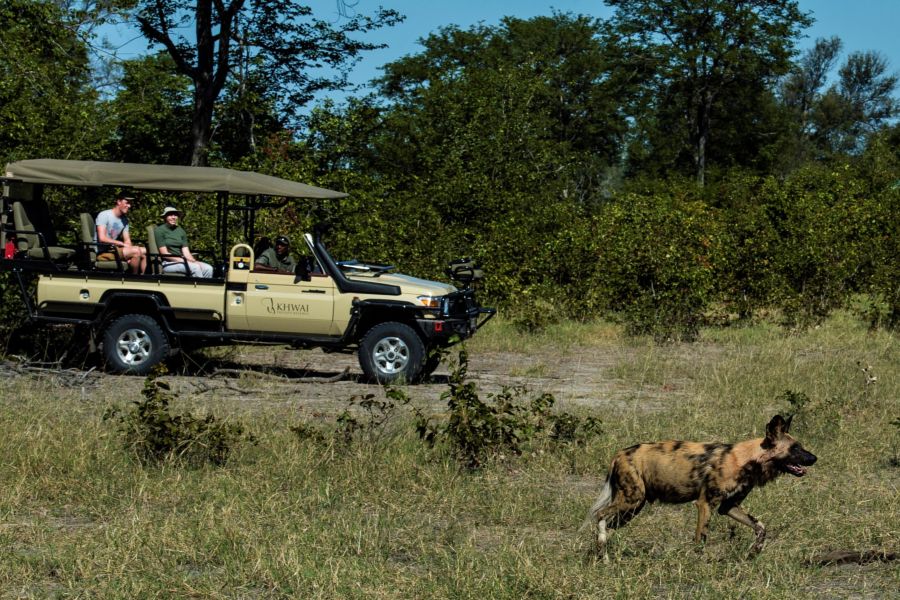 Encompassing a massive swathe of the central and eastern Okavango Delta, Moremi is a classic collection of wetland, fertile floodplains, open grassland and riverine forest. The Khwai Concession is run by the local community and borders the Khwai River and the north-east of Moremi.

From $545 per person sharing 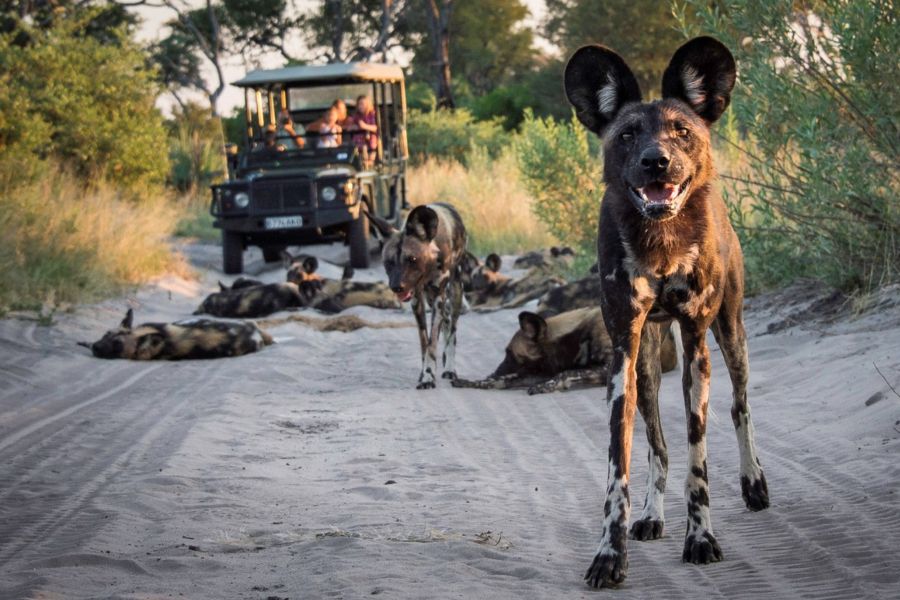 A pack in the road near Abu Camp.

The world’s biggest inland delta is made all the more remarkable by the fact that it is found in a country that is more than seventy percent semi-desert. Wild dogs are more likely to be found in ‘drier’ camps rather than those that are almost permanently surrounded by water and on Chief’s Island. They’re fairly nervous about water, instinctively fearing crocodiles that may be lurking just under the surface of the Okavango’s water.

From $920 per person sharing

From $920 per person sharing

South Africa offers among the most luxurious and upscale accommodation as well as the best infrastructure of any safari destination. 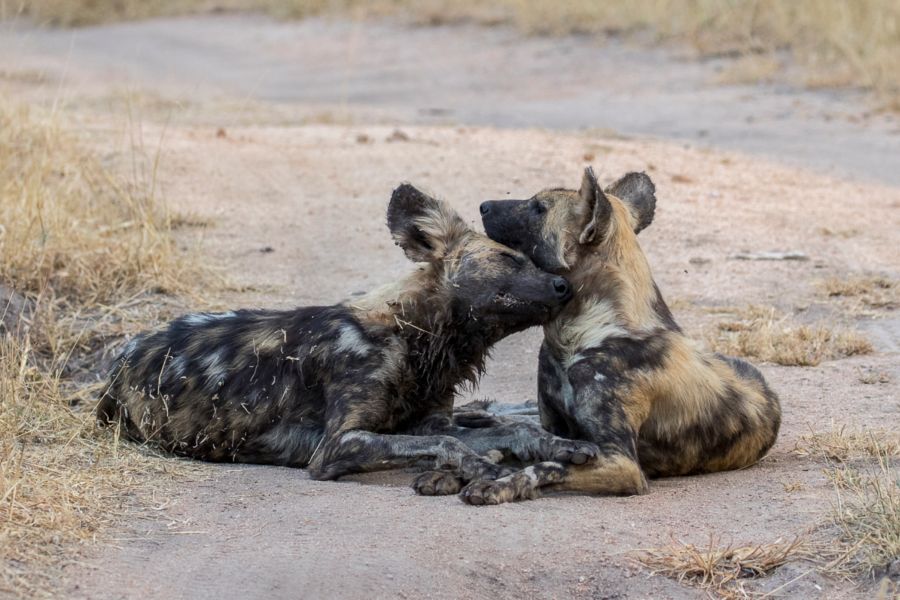 Spotted in the Sabi Sabi concession.

The Greater Kruger area takes in not only the Kruger National Park but also surrounding private reserves like the Sabi Sands, Timbavati, MalaMala and Manyeleti. There are fairly regular sightings of packs throughout the region, which lies to the north east of the country.

From $935 per person sharing

From $330 per person sharing

A very alert pack of adults at Sanctuary Makanyane.

Madikwe Private Game Reserve was a frontrunner in the successful re-introduction of wild dogs to reclaimed farmland. The packs have been under threat from disease but sightings are definitely still possible. Pilanesberg, a public national park on the border of the Sun City resort, has a surspringly good record of wild dogs being spotted.

Although Zimbabwe’s flagship wildlife area is Hwange National Park, Mana Pools has been known to see plenty of wild dog action; in fact, this is where the BBC’s Dynasties wildlife programme was filmed, which features memorable interactions like elephants charging wild dogs that get too close. This pretty park on a stretch of the Zambezi River is good to combine with time at Victoria Falls.

One of the world’s biggest conservation areas, Nyerere (previously Selous) offers vast tracts of land for a limited number of travellers to explore. Because it is so big, wildlife has plenty of space to move around but going out on the chase yourself is half the fun of safari!

From $790 per person sharing 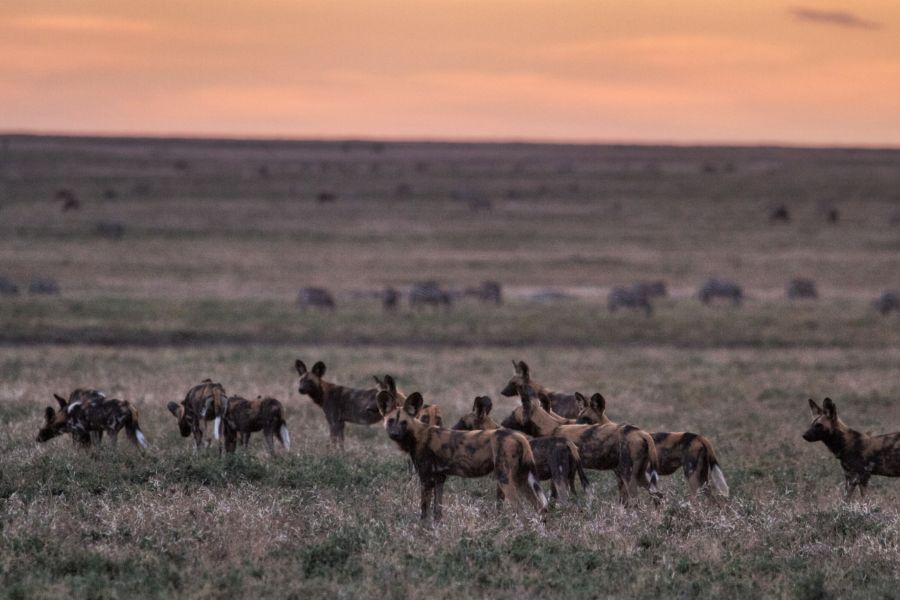 Getting ready to hunt near Serian Serengeti South.

Predators thrive in the Southern Serengeti because this is where hundreds of thousands of wildebeest, gazelle and zebra drop their babies at the beginning every year to take advantage of lush grazing and plentiful water. Lions dominate the savannah but wild dogs are also known to make the most of easy pickings here.

From $845 per person sharing

From $960 per person sharing

From $645 per person sharing 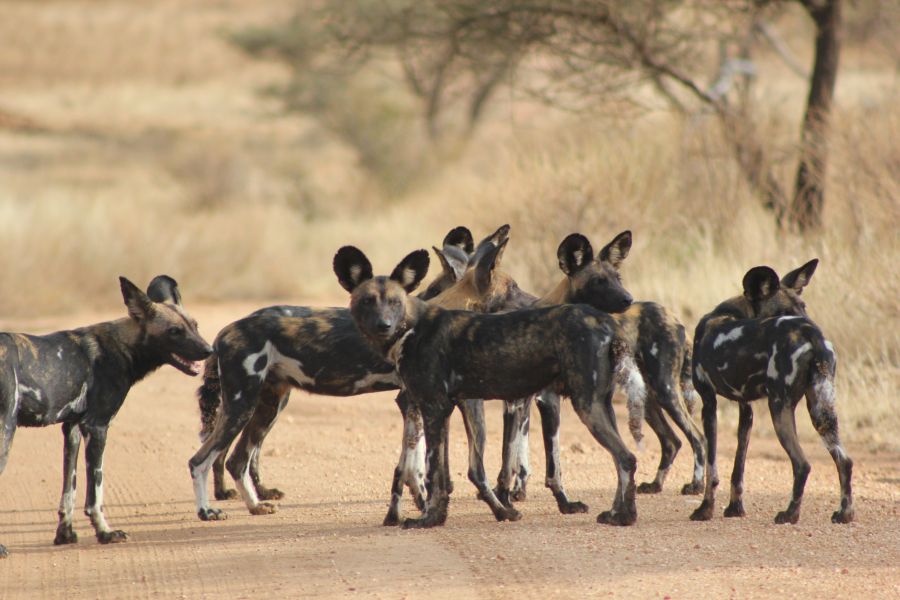 Much more arid and hilly than the Masai Mara, Laikipia and Samburu are two lesser-visited areas of Kenya that pack a massive punch in terms of wildlife viewing. You may be lucky enough to spot wild dogs but also look out for the Samburu Special 5, endemic species found only here (reticulated giraffe, beisa oryx, Somali ostrich, long-necked gerenuk and Grevy’s zebra).

From $240 per person sharing

Why are Wild Dogs Rare?

Why are Wild Dogs so Rare?

There are many reasons, including those befalling all wildlife across the world such as habitat loss and vulnerability to diseases, specifically rabies and canine distemper. Lions are ruthless in destroying any wild dog puppies they come across and have been known to kill all the pups in a den. Because they rely completely on co-operative hunting, a pack with few members has a very low chance of survival.

In addition to natural factors like predation and disease, wild dogs in parts of Southern Africa were also hunted to almost extinction by humans who thought that their method of co-operative killing was ‘cruel and unnatural’. A myth existed among early colonial farmers that wild dogs were ‘evil’ and packs should be eradicated en masse – one that has fortunately been put firmly to rest. 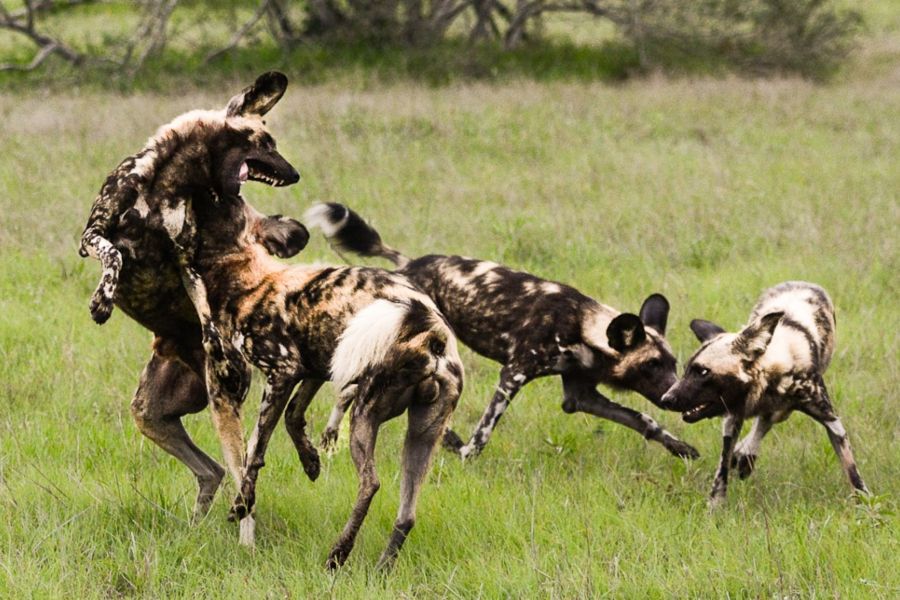 Practicing their hunting skills at Sabi Sabi in South Africa.