A treehouse makes for the ultimate safari lodge - there’s nothing quite like a giant fig tree spiralling through your suite to make you feel totally immersed in the wonder and romance of Africa. And the best part: the treehouse accommodation options are semi-permanent, meaning that everything can be totally removed to leave the landscape exactly as it was before. Aesthetically, the results of this eco-friendly approach can be simply astounding – here’s our top 12 selection of the most luxurious treehouse lodges, forest suites and sleep-outs in Africa: 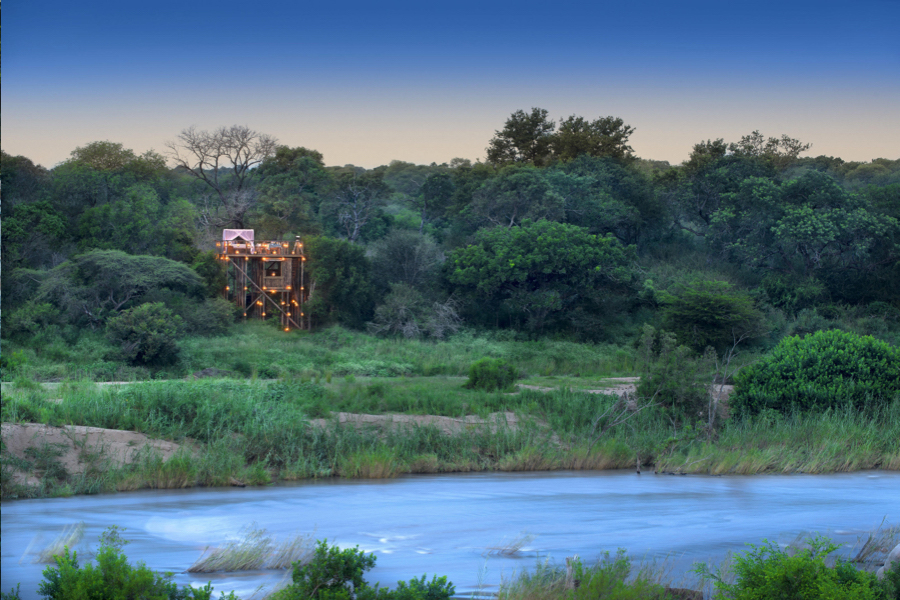 Lion Sands Game Reserve is not only famous for its excellent game viewing and world-class hospitality but arguably even more so for its trio of ultra-luxe and incredibly romantic treehouses, which can be booked in conjunction with a stay at one of the permanent lodges. Tinyeleti Treehouse is located in big game country on the Sabie River, within the Greater Kruger region.

Dinner is a gourmet picnic basket, accompanied by the sound of evening birdsong, the soft chirruping of nocturnal insects and the gentle susurration of the river. This African treehouse is an original hideout. Your guide will drop you off in the late afternoon and collect you at sunrise. You’ll have everything you need for the night, including a two-way radio. 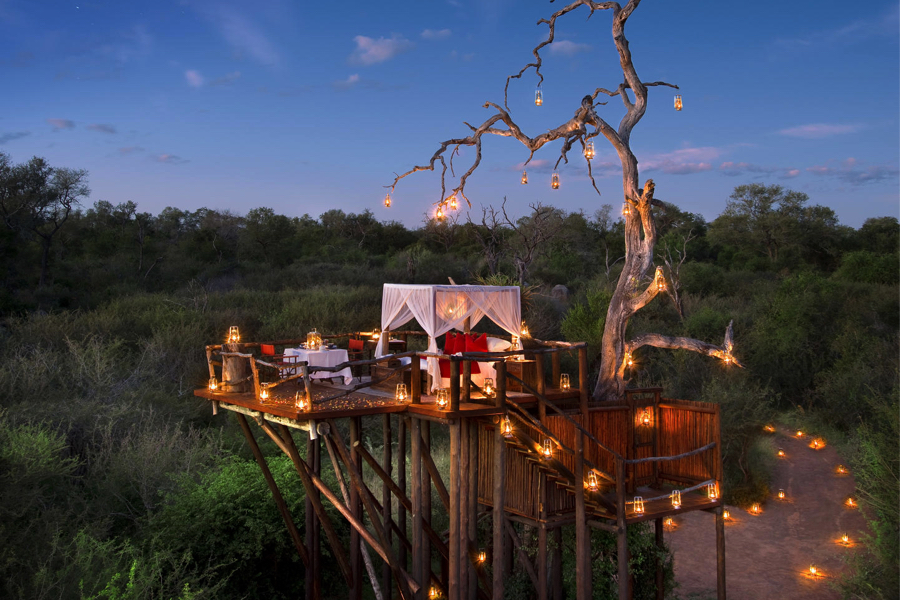 Chalkley Treehouse is built at the site where, in the 1930s, explorer Guy Aubrey Chalkley was thought to set up camp in a centuries-old leadwood tree. Listen out for the far-off contact calling of lions, the chortle-chortle of hippos that come out at night to graze on the grass and the occasional and unforgettable call of a roaming hyena. The Chalkley Treehouse in South Africa is perfect for couples, and your evening picnic basket consists of tapas-style delicacies and an excellent bottle of South African red wine. 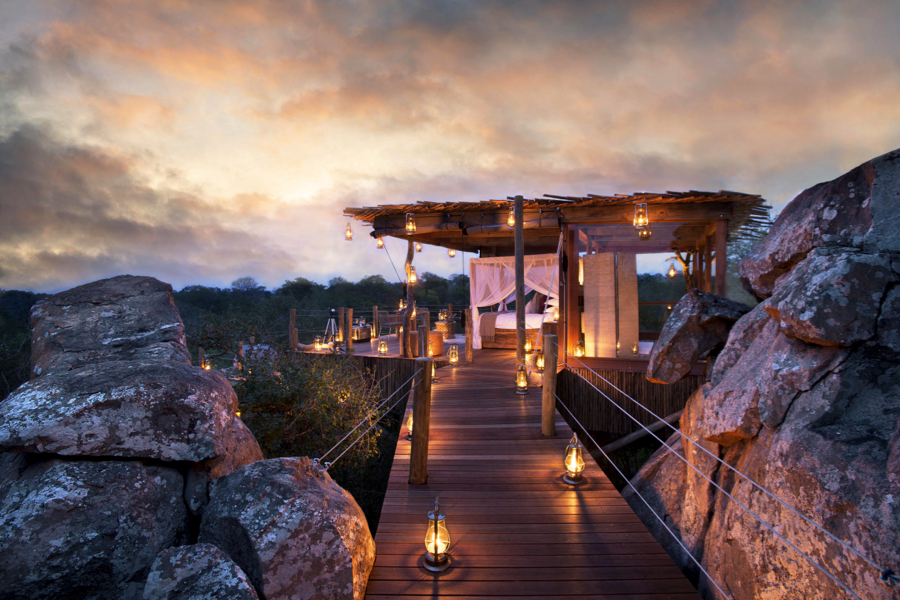 The last of the Lion Sands African treehouse trio, the Kingston Treehouse is flanked by giant boulders and woodlands at the rear and is positioned to enjoy sweeping views and sunsets in the west. This treehouse is constructed entirely from wood and glass and, unlike the other Lion Sands treehouse suites, it has a roof so you are ensured your night in the wilderness regardless of the weather.

Each of the treehouses at Lion Sands are equipped with en-suite bathrooms with all the lavish amenities you can come to expect at the Lion Sands permanent lodges. Each treehouse is equipped with a toilet and vanity, and The Kingstone Treehouse also has a shower. This is a romantic treehouse, perfect for a valentine’s getaway with your loved one.

Don’t let the cosy bush setting fool you: Singita Lebombo is a sought-after safari lodge and one of the most romantic treehouse getaways in South Africa. It’s built on a woodland hillside on a private concession in the Kruger and overlooks the N’Wanetsi River. Each suite at Singita Lebombo has an inviting daybed on the deck so you can while away the afternoon in the leafy shade or choose to spend the night outdoors with the stars twinkling overhead.

Whatever type of treehouse experience you prefer, one thing is certain: there’s no better place to share the dreamy African skies with the ones you love. Celebrate the chance to connect with nature, listen to the quiet sounds and distant howls of the night, and watch the moon and stars travel through the sky overhead. 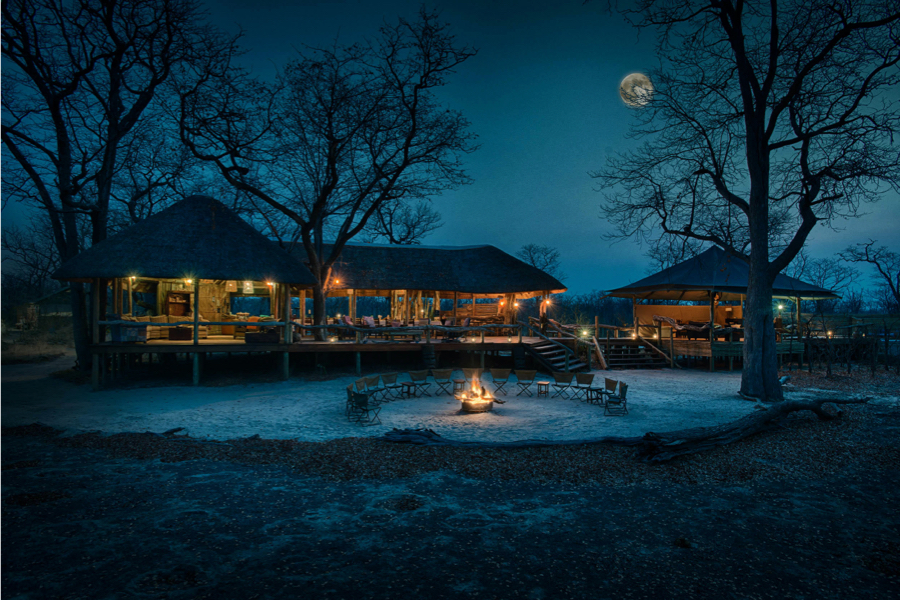 Hyena Pan is a remote tented camp built around a private waterhole in the wildlife-rich Khwai River area – renowned for exceptional year-round sightings of elephant, buffalo, hippo, big cats, wild dogs, and spotted hyena. The camp’s unique blockbusters are its ‘skybeds’. These elevated platforms are perched five metres (15 feet) above the ground and overlook a well-frequented waterhole. They consist of two levels: a bathroom on the lower level and an upper deck being your romantic bedroom under the stars - fall asleep to the sounds of the Okavango Delta’s nocturnal inhabitants. 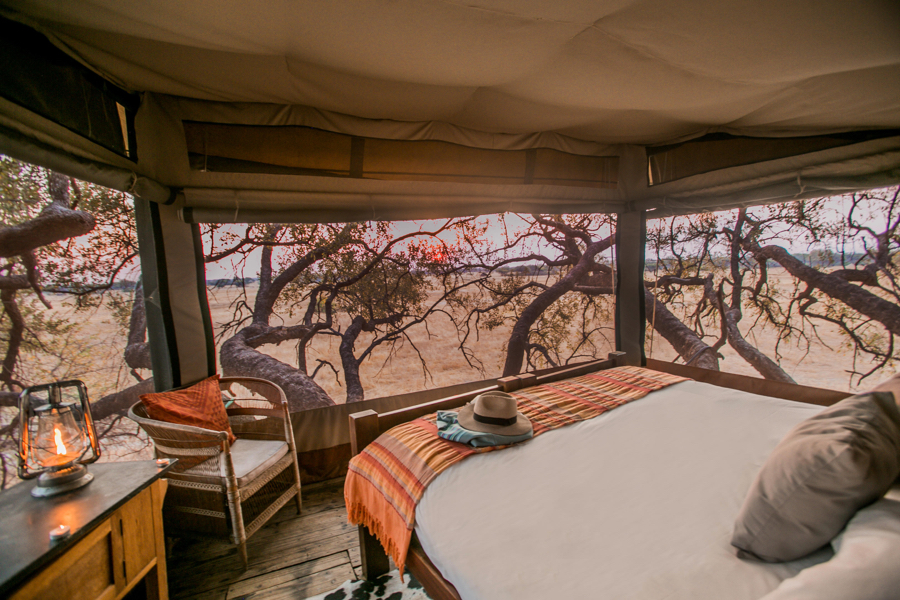 Few things compare to sleeping below a veil of glittering stars while listening to the sounds of the African wild. Stay at the Dove’s Nest Safari Treehouse for an incredible African sleepout. The wide tree-lined vlei and pan where giraffe and elephants come down to drink can be seen from your treehouse. Hwange National Park, one of Africa’s largest parks is renowned for its Big Five sightings and is right on the doorstep.

Only a 10-minute drive from the main camp, The Dove’s Nest has been expertly hidden within the branches of an old Leadwood tree. This magnificent romantic treehouse is situated in a safe and secure location and provides three levels. On the first level, there is a private bathroom with a view of the grasslands and a spacious and elegant sunken bath where you can unwind after an exhilarating day on safari. 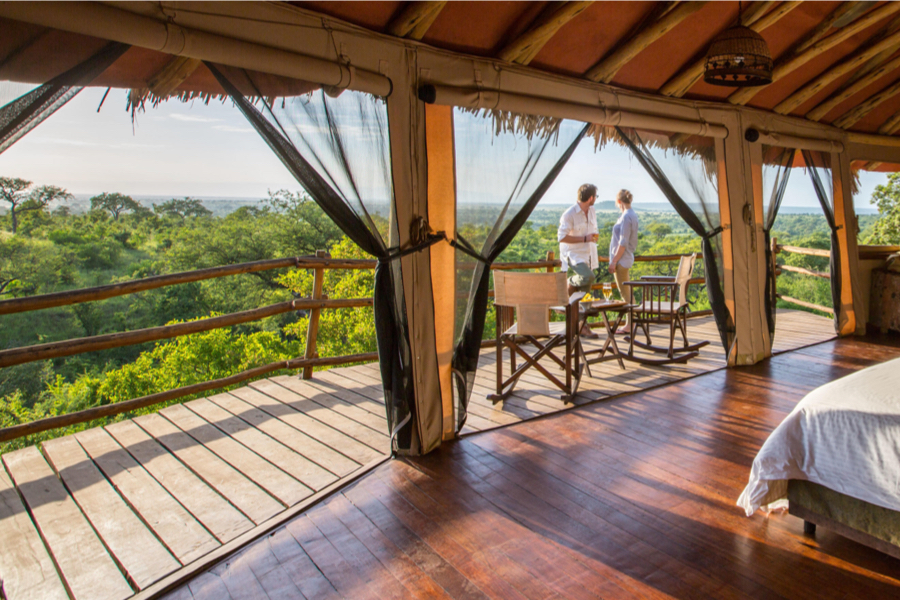 The Baobab Bar and main lodge area at Tarangire Treetops are built around an ancient old baobab tree or ‘Tree of Life’ as it is sometimes known in Africa. Tarangire Treetops is proud to host an African treehouse accommodation that is located in a private wildlife concession in Tarangire National Park. Your lofty position from the treetop suites – which are built on wooden platforms among the highest branches of the surrounding baobab, mopani and wild fig trees – give you glimpses of Lake Manyara and the Rift Valley wall. Roofs are thatched, while walls consist of mosquito netting and canvas flaps that can be rolled up completely, allowing you to utterly immerse yourself in nature and the life-giving warmth of Africa’s sunshine. 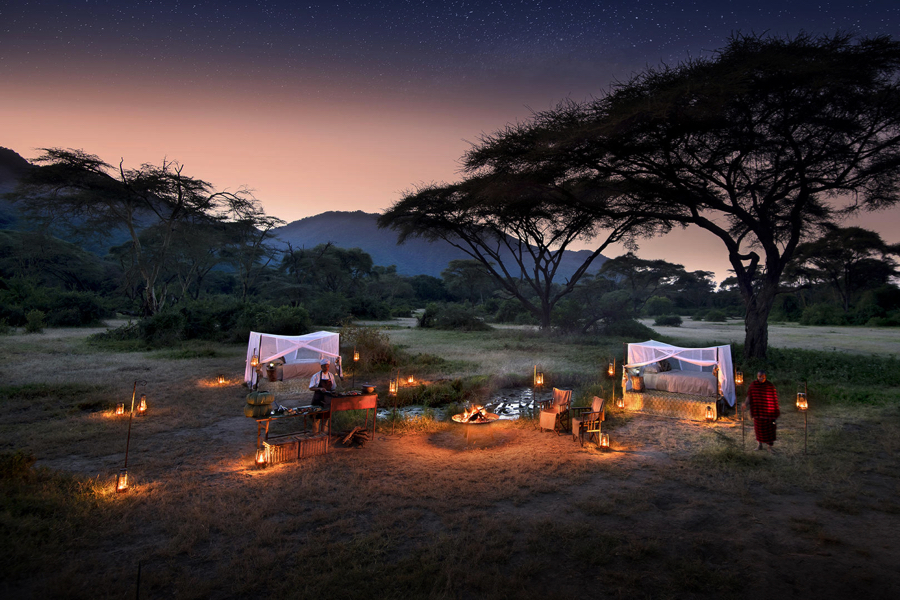 Lake Manyara is located in Tanzania’s northern safari circuit, not far from the Serengeti and world-renowned Ngorongoro Crater. In a lush groundwater forest of ancient fig and mahogany trees, Lake Manyara Tree Lodge allows you to feel totally at one with this green wonderland. There is a limited amount of luxurious stilted treetop suites at Lake Manyara Tree Lodge, and it’s the only accommodation within the Lake Manyara National Park, ensuring a totally exclusive experience. 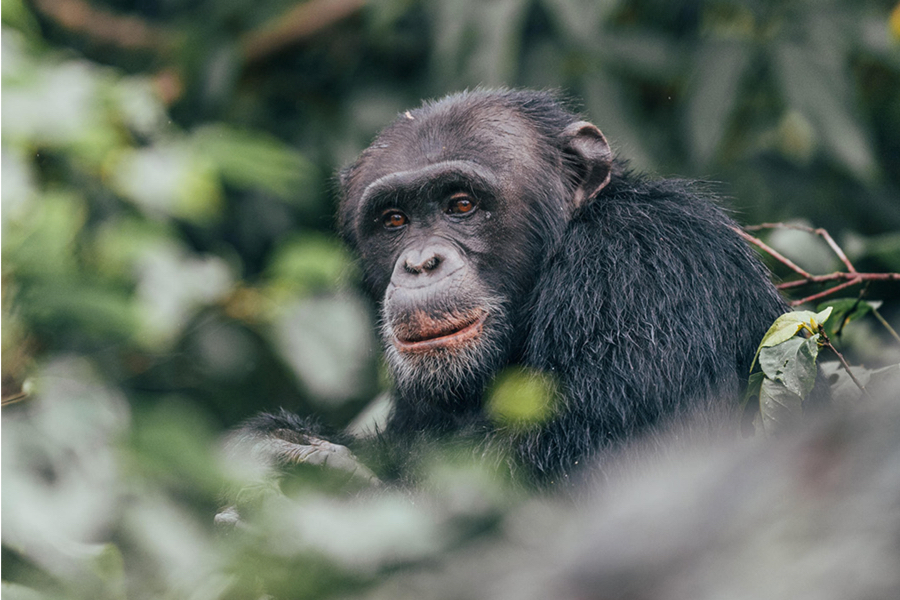 Aside from Rubondo Island Camp, the remote and unspoilt Rubondo Island is a totally uninhabited island on the south-western corner of Lake Victoria in Tanzania. At this unique camp, you can go chimpanzee trekking, see forest elephants and fall asleep in their unique treehouse suite, with black-and-white, fuzzy-tailed colobus monkeys leaping balletically from branch to branch nearby.

There’s just one treehouse at Rubondo Island Camp – it's set a bit further back from the other suites in amongst the forest and is perfect for a true escape where there is nothing separating you and the unspoilt wilderness of the island: a top contender for the most beautiful treehouse hotels in Africa. 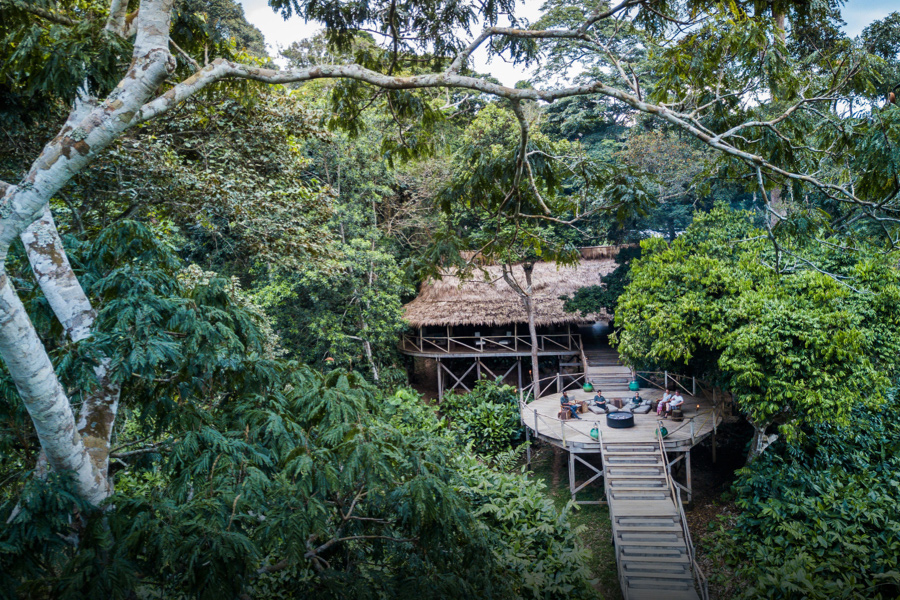 The tranquil Ngaga Camp is situated on the fringe of the Odzala National Park in Congo. Set in the second-largest tropical rainforest on Earth, this pioneering camp is raised off the forest floor to ensure a minimal environmental impact. Ngaga’s forest bungalows offer exceptional 360-degree views straight into the emerald heart of Africa, teeming with exotic birds and inquisitive colobus monkeys.

Go on guided treks to discover the forest’s most elusive secret: western lowland gorillas. This camp is ideal for adventurous couples looking for an off-the-beaten track nature experience in a truly remote and remarkable destination. Consider sharing this surreal location and one-in-a-lifetime activities with your loved one over Valentine’s Day. 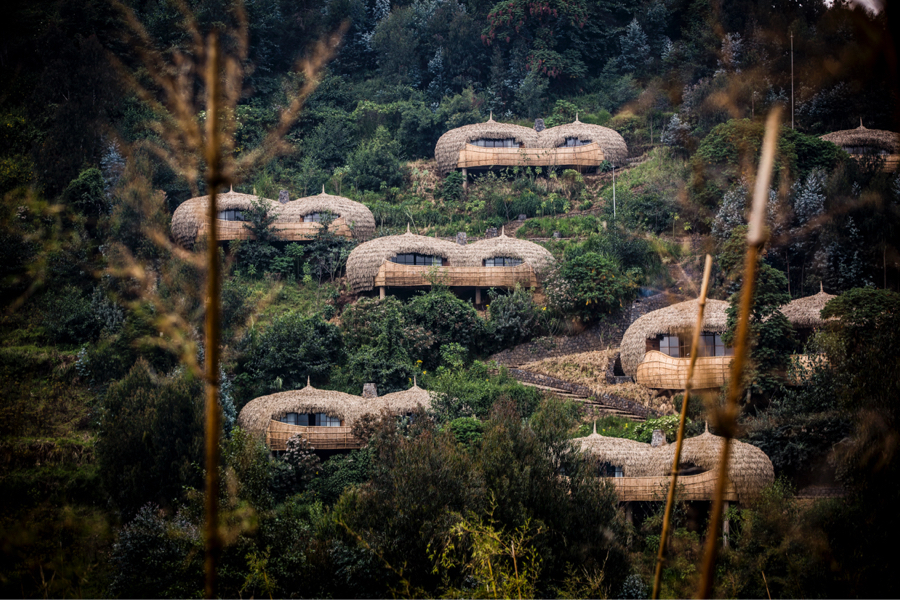 Bisate Lodge is perched spectacularly on the edge of Volcanoes National Park in an inactive crater of north-western Rwanda.  Explore the natural trails on the romantic treehouse resort’s grounds, where birds abound, and silverback gorillas have been captured lumbering along the verdant walkways. You can even join in on planting trees to support Bisate's reforestation project which aims to rejuvenate wildlife populations in the area.

Enjoy healthful farm-to-table dishes fusing traditional Rwandan flavours with current world cuisine and the best of local wines from the Bisate cellar. Activities to enjoy including gorilla tracking, traditional village visits, golden monkey sightings, birding, and tours to areas of interest such as Lakes Ruhondo and Burera, the Musanze Caves, and Dian Fossey's burial site. After a thrilling day of hiking, you can relax with a fantastic couples massage at the spa. 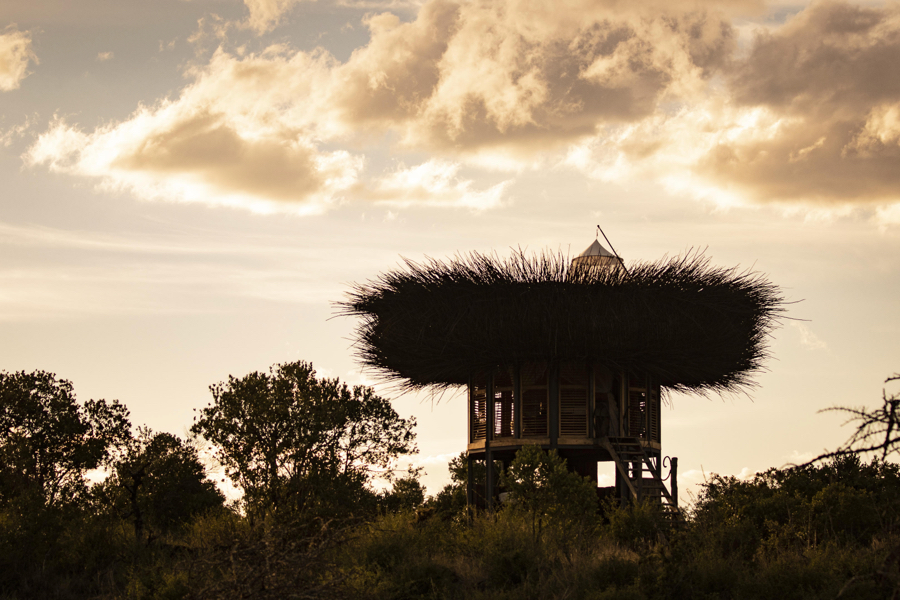 Nay Palad Bird’s Nest is an award-winning sustainable luxury destination at Segera Retreat, surrounded by the beautiful Laikipia Plains. It is one of Kenya's most stunning safari settings. The Bird’s Nest, perched in the treetops on a river filled with wildlife, offers daily views of the plains and night-time vistas under a canopy of stars. This romantic setting would make for a dream-like honeymoon treehouse sojourn.

In the morning you can awake to the sound of wild prey in the plains beyond and get ready for a day of game-viewing after a hearty breakfast - perched in the branches of the Nay Palad Bird’s Nest. All programs on offer are partnered with local communities and upliftment projects, contributing to ethical and sustainable eco-tourism stays.

Ready to Plan your Next Romantic Escape?

Chat with someone who's been there. Get in touch with one of our Africa Safari Experts to help tailor-make a romantic retreat that's right for you: