10 Facts About Tanzania's Ngorongoro Crater You Should Know

Take almost 30,000 large mammals and place them inside the crater of an extinct volcano. Add about 264 square kilometres (102 square miles) of wetlands, forests and grasslands, and the result is the Ngorongoro Crater. This world-famous safari destination offers its visitors superb game viewing in an unbelievably unique setting. Nothing can fully prepare you for the moment you first gaze down into the Ngorongoro Crater.

The Crater is located within the Ngorongoro Conservation Area, a protected region in Tanzania that comprises a large chunk of the southern Serengeti’s short-grass plains and the Ngorongoro Highlands, a range of ancient volcanoes on the west side of the Great Rift Valley. The Ngorongoro Crater has earned a fabled reputation as one of Africa's most unique natural wonders, boasting a remarkable concentration of animals living in diverse habitats. 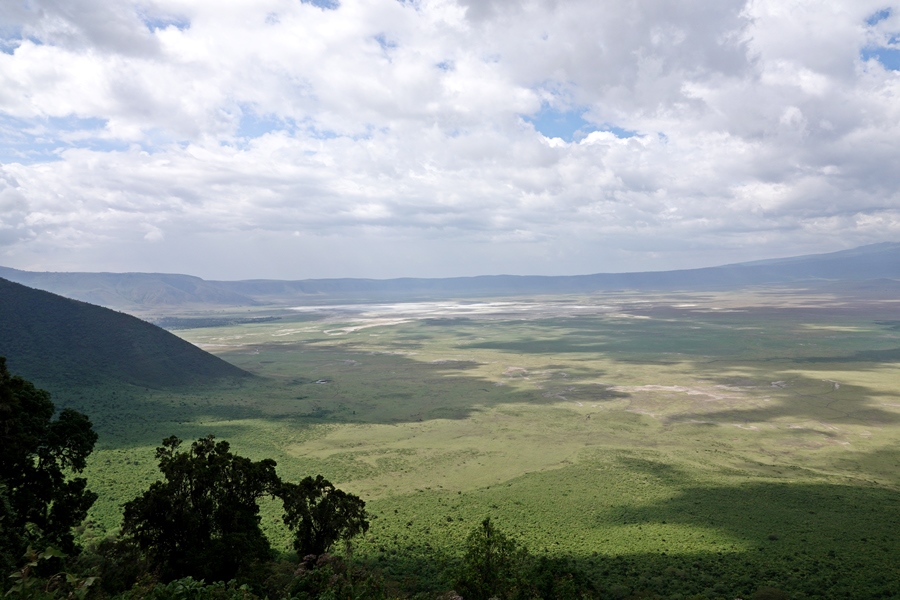 1. How Was the Ngorongoro Crater Created?

The Ngorongoro Crater is thought to have formed about 2.5 million years ago when an active volcano’s cone collapsed inward after a massive eruption. The enormous, unbroken caldera we see today is the main remnant of this implosion.

Spanish for 'cauldron', a caldera is a bowl-shaped volcanic cavity that’s usually more than one kilometre (0,6 miles) in diameter, with an outer edge formed by steep slopes. A caldera is generally formed when the top of a volcanic cone (or group of cones) collapses because it’s no longer supported by an underlying body of magma.

After all the major eruptions are complete, the top of the volcanic mountain will have disappeared, leaving a gigantic hole in its place. Minor eruptions could happen after the major implosion and create smaller cones in the caldera’s floor. These may later fill up with water to form lakes.

3. What is Unique About Ngorongoro Crater?

4. How Old is Ngorongoro Crater?

It is believed to be between two and three million years old.

5. What is Ngorongoro Crater Known For?

It is renowned for its geological splendour and the variety of fauna and flora found in an astonishingly compact area. You are guaranteed to see big concentrations of animals on a game drive in the Ngorongoro Crater. The Crater also delivers some of the most reliable sightings of the Big 5 (elephant, buffalo, rhino, lion and leopard) in East Africa.

6. What Does Ngorongoro Mean in English?

Ngorongoro is believed to be an onomatopoeic word termed by the Maasai people of the region to describe the sound of the bell that hangs around the neck of the lead cow in a herd. The bell makes an echoing "ngor ngor" sound, which made the local pastoralists name the area Ngorongoro.

7. When is the Best Time to Visit Ngorongoro Crater?

As the wildlife remain within the steep-walled caldera all year round, the question of when to go to Ngorongoro Crater is less about optimising your game viewing experience, and more about how many other people and vehicles you want to share the Crater with. The dry season months are between June and October when temperatures are cooler and animal sightings are superb – it’s easy to spot them along the barren plains and they don’t wander far from watering holes. But this is also peak safari season when throngs of tourists flock here from all over the world.

Tanzania’s two rainy seasons are from April to May and November to December. Temperatures are warm and the roads around the caldera can get rather muddy. But there are far fewer visitors during the wet seasons and the Ngorongoro Crater transforms into a wonderfully lush, emerald 'Garden of Eden'.

1. The World's Biggest Intact Volcanic Caldera (That’s Not a Lake) 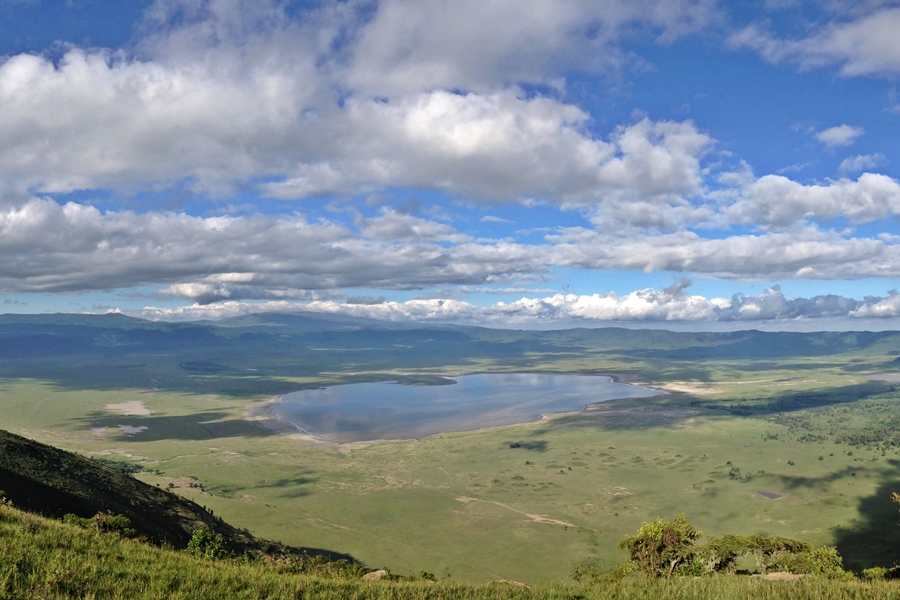 The Ngorongoro Crater is approximately 16 to 19 kilometres (10 to 12 miles) in diameter, and the height of its walls range between 400 and 610 metres (1,312 and 2,000 feet) – more than 1.5 times higher than the Empire State Building. There are a few calderas around the world, but the Ngorongoro Crater is unique because it’s the biggest one with fully intact (unbroken) walls and hasn’t filled up with water.

2. One of the Seven Natural Wonders of Africa 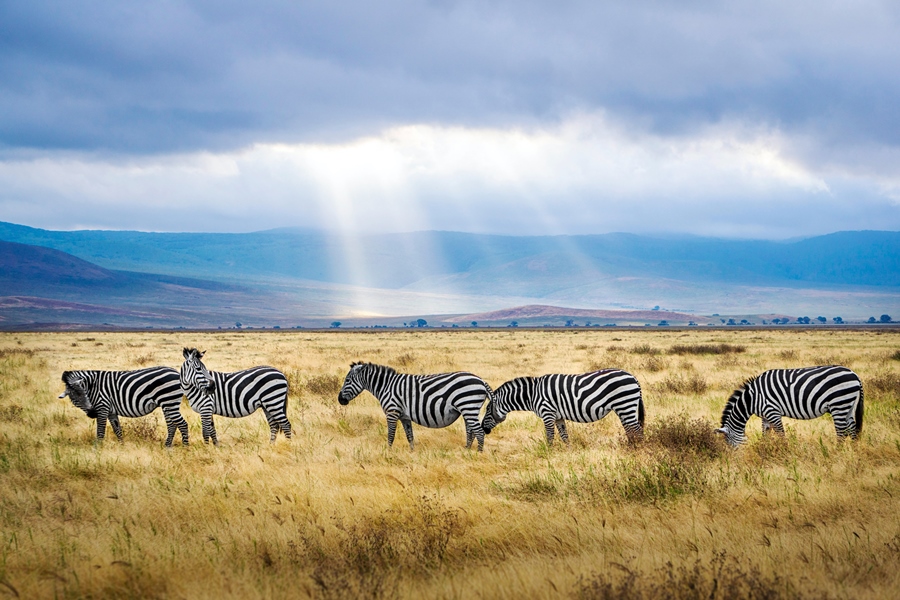 The Ngorongoro Crater is one of Africa’s Seven Natural Wonders, along with the Red Sea, Mount Kilimanjaro, Sahara Desert, Wildebeest Migration, Nile River and Okavango Delta. The Crater is located within the Ngorongoro Conservation Area, a protected territory in Tanzania’s Arusha region and a UNESCO World Heritage Site. 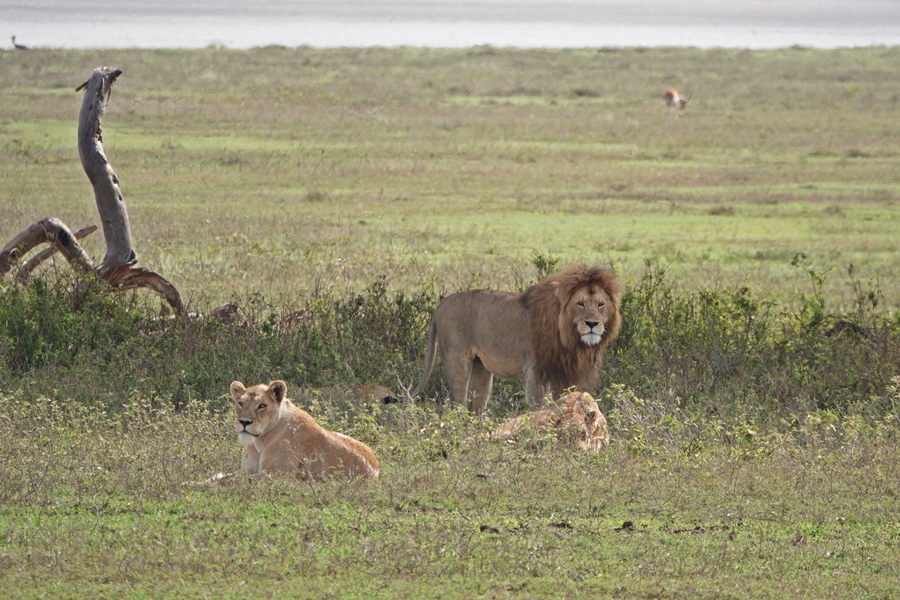 Thanks to the mineral-rich volcanic soil, the short-grass plains grow lush on the Crater’s floor, which provide nutritious grazing for a plethora of herbivores. These big herds in turn attract a remarkable number of predators – the densest populations found anywhere in Africa.

The Crater’s resident lion population is arguably one of the highest densities of prides in the world. This is one of the Ngorongoro Crater facts that makes it such a popular safari destination. Consequently, the lions here have a complete disregard of safari vehicles – they will hunt within metres of a vehicle and even seek respite from the sun beside one!

Completing the team of predators in the Crater are spotted hyenas, cheetahs, leopards, jackals and bat-eared foxes. 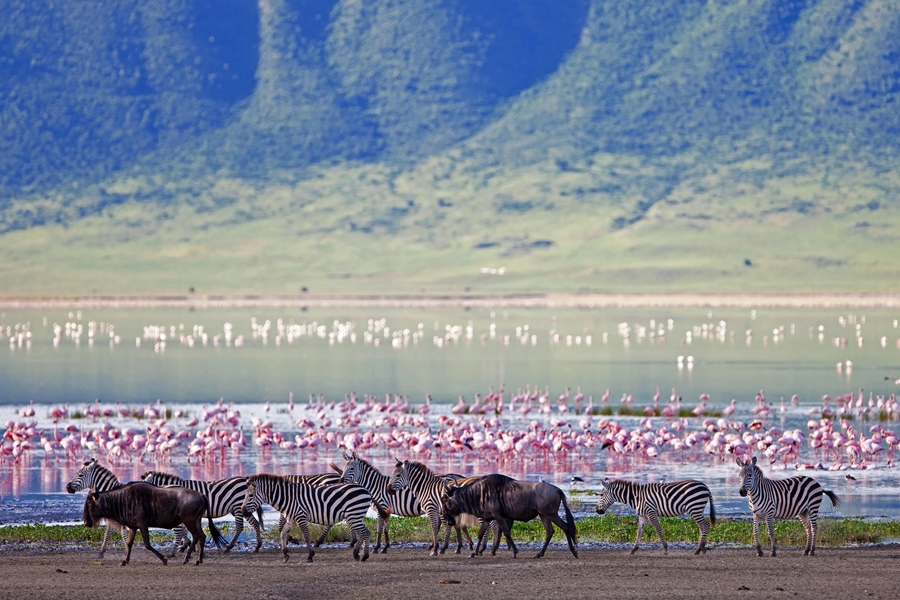 You are guaranteed to see a lot of animals on safari in the Ngorongoro Crater. The fertile floor of the caldera is mostly flat, open and covered in nourishing grasses that support large numbers of grazers like zebra, wildebeest, Thomson's and Grant's gazelle, buffalo and tsessebe.

East of Lake Magadi, a shallow soda lake in the Crater, you will find the Ngoitokitok Springs and Gorigor Swamp where pods of boisterous hippo marinate the days away. Ngorongoro Crater is also a fantastic bird watching destination, home to over 500 species including ostrich, secretary bird, kori bustard and greater flamingo. 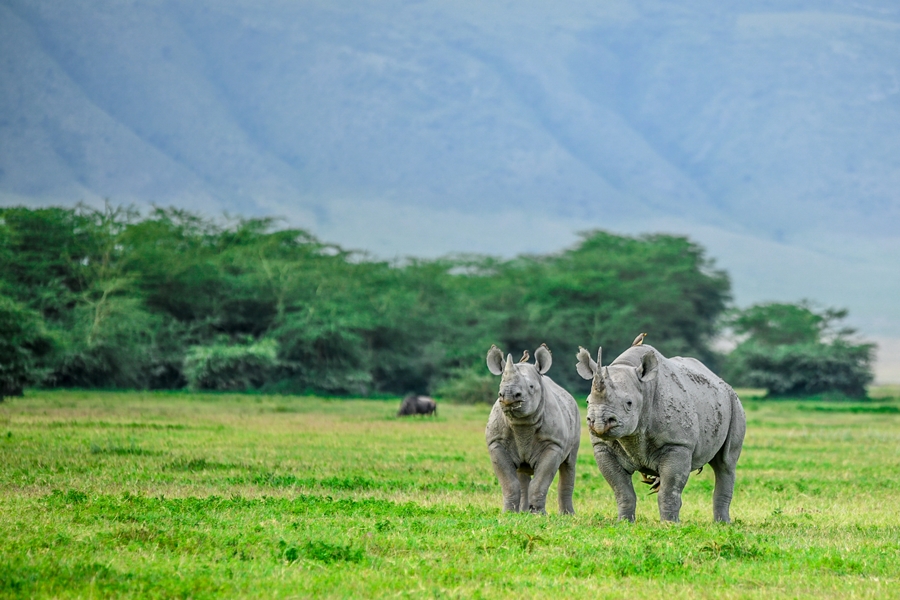 The Crater offers visitors a high chance of seeing all the members of the Big 5 in one place – arguably one of the best-known Ngorongoro Crater facts. The resident lion population is prolific, buffalo herds are healthy, leopards are generally seen around the forested areas, and large herds of elephant are present during the wetter months (November, December, April and May).

But it’s the Crater’s small number of endangered black rhinos that makes it such a special place to visit. These odd-toed ungulates live in a section of the caldera that’s protected by park rangers, but can often be seen on the open grasslands.

6. No Giraffe & Impala Live in the Ngorongoro Crater 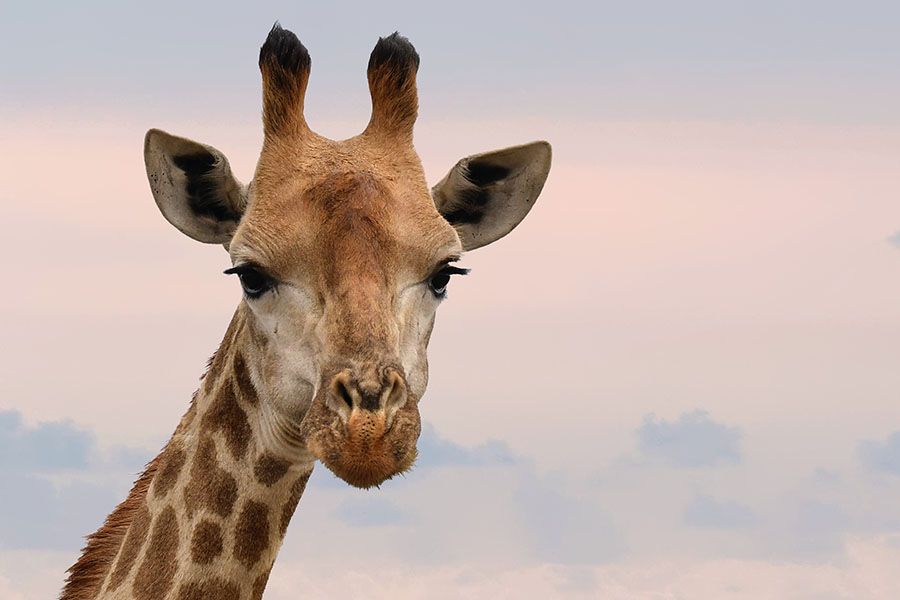 The only unexpected absentees from the 25,000+ mammals that live inside the Crater are giraffe and impala. The lack of open woodlands and certain tree species fancied by these animals is believed to be the reason for their dearth.

7. One of the World’s Most Important Prehistoric Sites 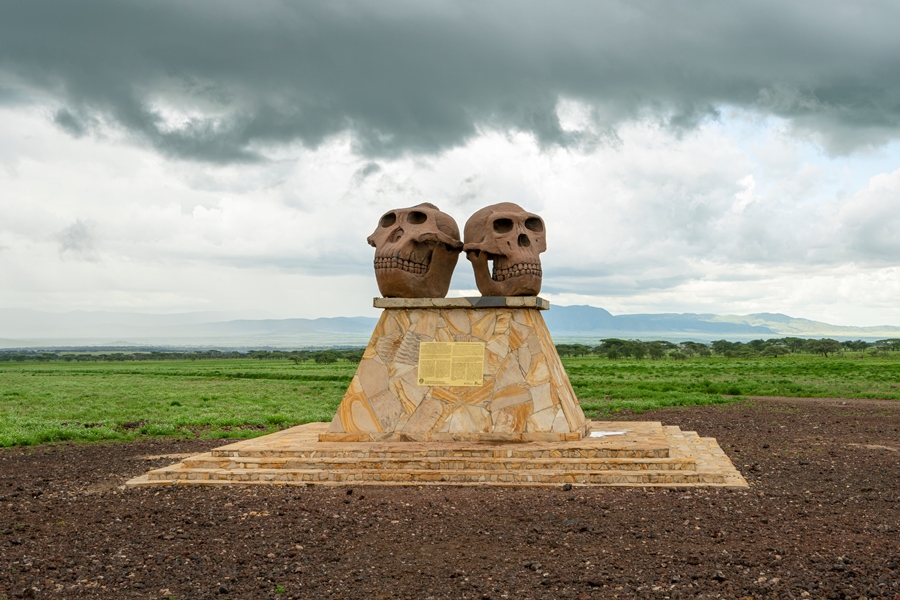 This is one of the Ngorongoro Crater facts that would appeal to travellers with a keen interest in archaeology. Olduvai Gorge in the Ngorongoro Conservation Area holds some of the most comprehensive history of any place on Earth. Fossils have been discovered in Olduvai’s volcanic rock that date back to about 3.6 million years ago, which have been instrumental in understanding human evolution. These hominid fossils are believed to be the earliest known evidence of the human species. 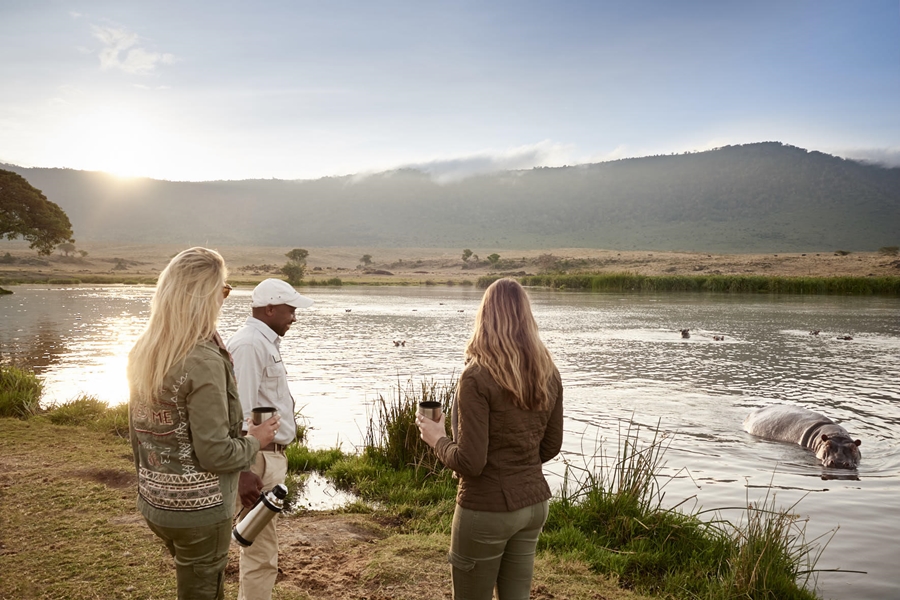 Besides the gorgeous scenery and abundance of wildlife, the Ngorongoro Crater also boasts an impressive variety of natural habitats. Some of the most notable ecosystems include:

9. You Can Stay on the Crater’s Rim 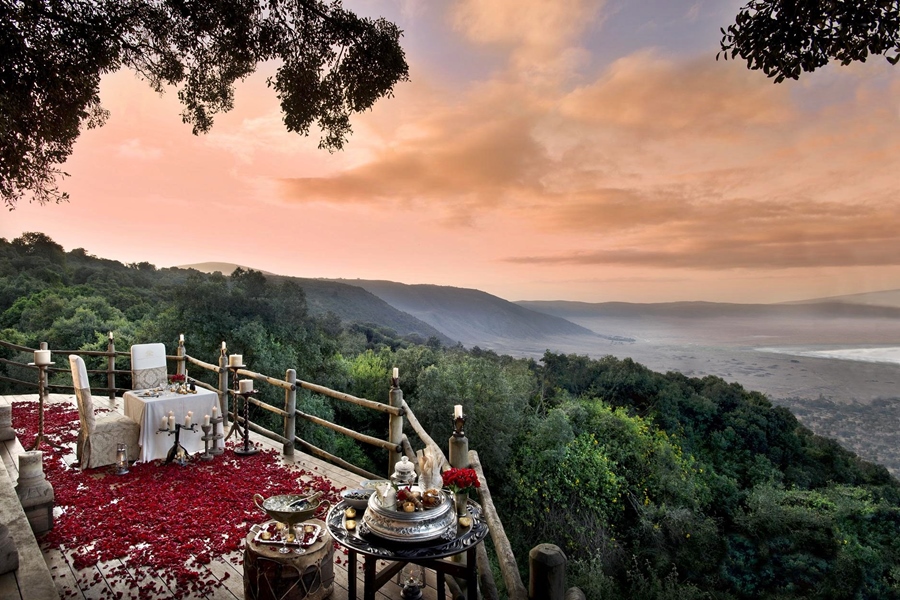 To control traffic and protect the delicate environment, the Ngorongoro Crater Conservation Area’s authority only issues six-hour permits to visit the Crater’s floor. That means there are no accommodation options available inside the caldera.

However, various safari lodges and camps are set on the Crater’s rim, with some boasting among the most spectacular views in the world. Travellers can also stay on the Rift Valley Escarpment, or in the nearby town of Karatu where you’ll find more affordable Ngorongoro Crater accommodation, but you will travel for about an hour before reaching the Crater. Staying on the rim means you’ll be among the first to descend into the caldera for your morning game drive.

From $540 per person sharing

From $395 per person sharing

From $540 per person sharing

See All Our Ngorongoro Accommodation 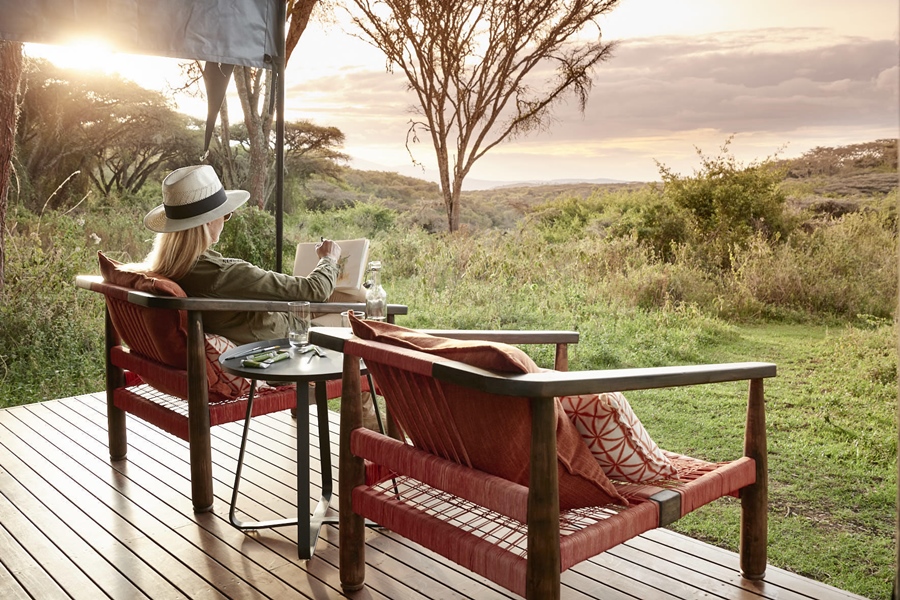 Most travellers will maximise their safari by building an itinerary that combines the Ngorongoro Crater, Serengeti, Tarangire and Lake Manyara – some of the best places to visit in Tanzania. Kilimanjaro International Airport serves these destinations with the help of an extensive road network. Known as Tanzania’s Northern Safari Circuit, this route makes it easy for visitors to experience the country’s incredible diversity of wildlife and landscapes in a single itinerary.

Now that you know some handy Ngorongoro Crater facts, get in touch with our team of Africa Safari Experts to help tailor-make an itinerary that’s right for you: