Where to Go in Africa in February

Africa in February sees summer in full swing. Rain has settled in across most of the continent, nourishing its vast savannahs and irrigating the tropical coastline through afternoon showers. But it's not all grey clouds: choose the right destination and you’ll find yourself under Africa's classic blue skies and gorgeous sunshine.

It’s a great time for both safaris and beach holidays if you know where to go in February, and you’ll be perfectly in time for some of the year’s biggest wildlife experiences. If you’ve ever wanted to snorkel with a 12-metre (40-foot) whale shark or encounter a rare mountain gorilla in its natural habitat, this is the time to do it. It's time for cool wine cellars on sprawling estates in the Cape Town's magnificent winelands and palm-thatched bandas on endless tropical beaches.

Want to see blue skies overhead? Book a vacation in Africa in February. It might not be peak season in the most popular places, but it’s the perfect season for a little R&R under the African sun in these destinations: 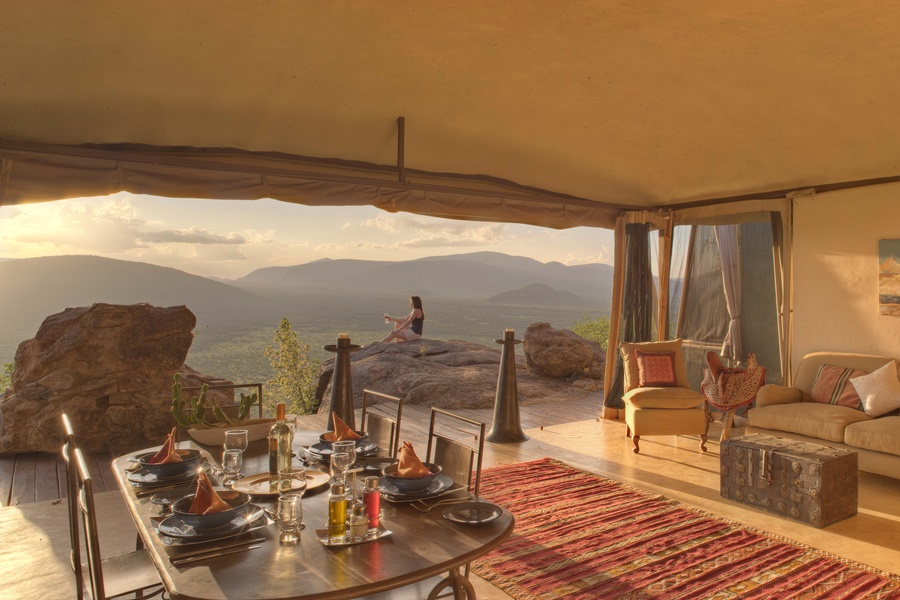 Nudging northern Kenya’s savannah plains, the Samburu National Reserve is a very different destination to its more famous southern cousins, Amboseli and the Masai Mara. Samburu’s palm groves and thorny scrub are in complete semi-desert contrast to the Mara’s rolling grasslands, but the wildlife is equally as superb. You'll find all the regulars here – elephant, lion and leopard – along with some species unique to the region such as the Samburu Special 5: Grevy's zebra, gerenuk antelope, reticulated giraffe, Besia oryx and Somali ostrich.

Remember, it’s hot in February, so lodges with pools are ideal, but this is a nice dry window of opportunity between Kenya’s rainy seasons. Game viewing by 4X4 is the main activity here alongside cultural encounters at the local villages, fascinating guided nature walks and even camelback safaris.

Samburu and the Masai Mara is where to go in February and one of the best ways of experiencing Kenya in our opinion. You get to enjoy the diversity and unique landscapes of the Samburu with the iconic savannah and wildlife of the Mara. 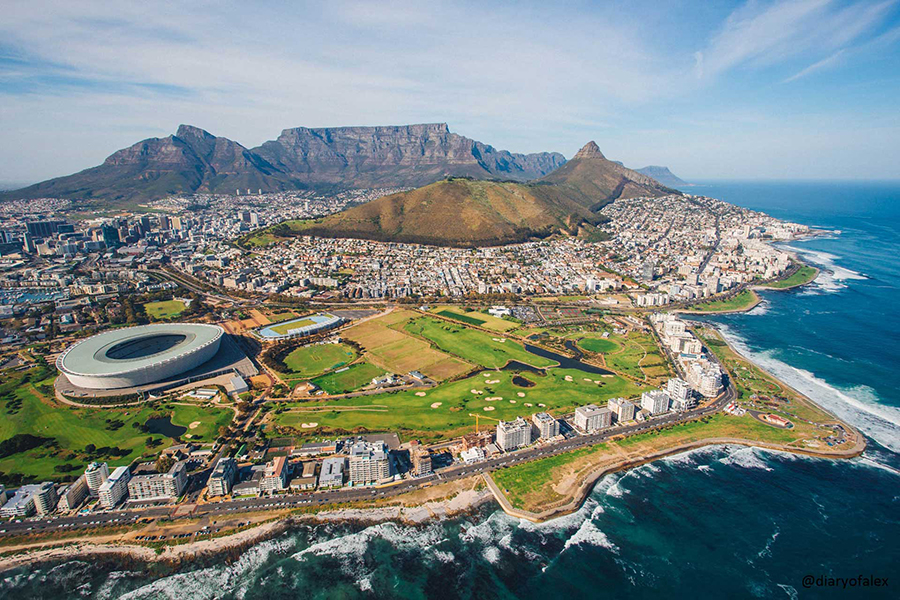 February is the connoisseur’s choice for summer in Cape Town. Free from the festive-season crowds, it’s as sunny as Africa should be and as dry as an oak-matured chardonnay. From the spectacular white-sand beaches of Camps Bay and Clifton to the shopping hub of the V&A Waterfront, there is plenty to do and see. But our advice is to skip the sun-baked City Bowl and head south for the cooler, shadier slopes of Table Mountain, where plump rows of green vines mark the start of the Constantia Wine Route.

One of Cape Town’s most exclusive neighbourhoods, Constantia is home to South Africa’s oldest wine estates and the February heat makes those chilled wines and under-the-oak-tree picnics sublime. There’s also excellent hiking in nearby Silvermine Nature Reserve, as well as organic food markets to browse and local beaches to visit. Finish off a lazy summer day with a music concert in the natural beauty of Kirstenbosch Botanical Garden – the perfect way to experience South Africa in February. 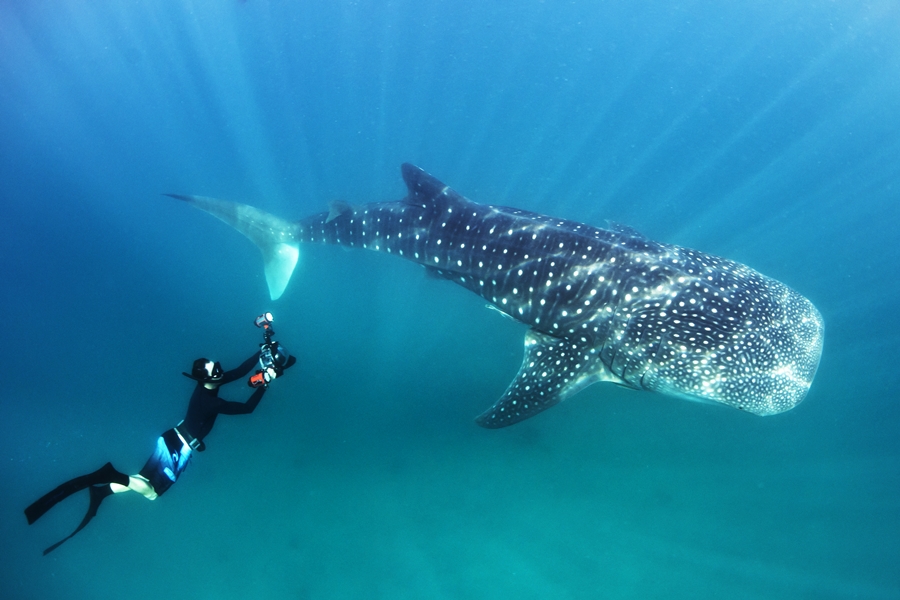 After Tanzania’s short rains season, the southern Serengeti offers good grazing for the Wildebeest Migration’s herds. It’s calving season until about March – prepare yourself for plenty of wobbly babies and potential heartbreak as predators swoop in on easy prey. If you’re looking for dramatic predator action, East Africa in February will deliver lions, brown hyenas, leopards and even wild dogs taking advantage of vulnerable calves. If that’s not enough action, February also kicks off the Migration’s rutting season when males joust for the right to mate with receptive females.

Longer than a London bus and weighing twice as much, the whale shark is the ocean’s biggest fish by a country mile. But its great size belies a curious fact: slow-moving, filter-feeding whale sharks are about as dangerous as a dozing cow. Snorkellers have even grasped a table-sized fin to catch a ride! Young whale sharks are known to be playful with human divers.

A migratory species, these beautiful giants grace the East African coast between October and April in numbers unheard of just a decade ago, and February is the best month to see them. Head for the south coast of Kenya or Zanzibar’s gorgeous islands where your visit will happily coincide with the archipelago’s best weather. Chumbe Island is great for general snorkelling, while Mnemba Island has its own marine reserve, and Pemba and Mafia islands are legendary whale shark snorkelling spots. If you’ve always dreamed of swimming with our planet’s biggest fish, then head to East Africa in February.

Ready to Plan a Trip to Africa in February?

Get in Touch
Uganda, Rwanda & Congo 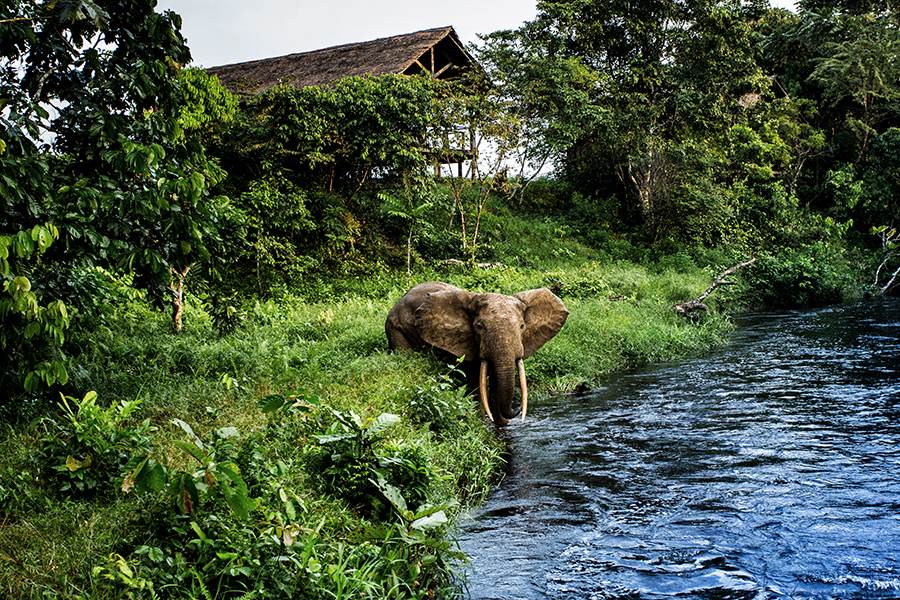 Elephants, chimpanzees and forest buffalo are big attractions, but the stars of the show are endangered gorillas. Congo, Uganda or Rwanda are where to go in February to see these great apes in their natural habitat. Although gorilla trekking is considered a year-round activity, February is one of the best times for these expeditions: it's dry, hiking conditions are good and the month has the lowest malaria risk. For most of the year, gorillas eat a diet of plain, starchy vegetation, but come February, they can be found beneath the trees heavy with fruit.

If you’re planning an Indian Ocean holiday in February, you’d better pack an umbrella: it’s cyclone season. So why are we recommending Mozambique and the Seychelles? Because they are located outside the cyclone zone and, although there are occasional afternoon showers, both destinations offer classic sun-drenched, palm-fringed beaches at the time of year when the northern hemisphere is under snow and ice.

The small, exclusive Quirimbas Archipelago lies off northern Mozambique and is ideal for honeymooners and adventure-seeking families. The Seychelles experience ranges from family resorts to private islands with everything in between. Both destinations offer an unbeatable blend of water sports action and indulgent pampering and, thanks to easy logistics, both make a fantastic add-on to your safari in Africa in February.

Thinking of Visiting Africa in February?

Get in touch with one of our Africa Safari Experts to help you tailor-make a trip to Africa in February: