Numerous locations in Kenya inspired the original 1994 Lion King film and many of the 2019 version’s computer-generated images are based on actual video footage taken in Kenya. This incredible 10-day safari delivers grandstand views of these magnificent settings and up-close encounters with the animals that made the movie famous.

This Lion King adventure officially kicks off at an award-winning camp located in a private game reserve that is an important wildlife dispersal area for animals roaming in and out of Amboseli National Park. This breath-taking conservation area is a haven for a wide variety of animals like lion, cheetah, giraffe, striped hyena and the massive elephants that Amboseli’s known for.

Then be whisked off to a secluded valley in East Africa’s biggest sanctuary for endangered black rhino, as well as a refuge for rescued chimpanzees. You will spend a few days at an intimate eco-camp situated in the Ol Pejeta Conservancy, a pristine wildlife area in Kenya’s Laikipia region – and part of our New Safari Bucket List’s best-kept secrets. Track the Big 5 on daily game drives and nature walks with Maasai guides and visit Baraka, Ol Pejeta’s black rhino ambassador.

Meru National Park is your next stop, well known for another famous lion, Elsa from Born Free fame. Meru was one of the two areas in which conservationists George and Joy Adamson raised Elsa the Lioness, as well as her final resting place. Rhino River Camp’s magical location flaunts tranquil views of the Kindani River, and each room is designed with its own private meditation area. With Meru National Park on your doorstep, you can see the Big 5 (elephant, buffalo, rhino, lion and leopard) within minutes of leaving camp.

Close this extraordinary safari in Kenya at an award-winning tented camp in a stunning location. The pristine Olare Motorogi Conservancy is an exclusive wilderness area that borders the Masai Mara National Reserve and was set aside for wildlife conservation and low-impact tourism. Spend your last few days well off the beaten path while enjoying private game drives and escorted bush walks with Maasai warriors.

This authentic safari is filled with adventure for young and old. The camps have been hand-picked for their i

After touching down at Jomo Kenyatta International Airport, you will be met by your friendly guide and transferred to Nairobi Tented Camp. This authentic safari camp is situated deep in the heart of the Nairobi National Park, Kenya’s most accessible safari destination located a mere 7 kilometres (4 miles) from the capital city’s centre. A much-needed stopover before heading into the wilderness, Nairobi Tented Camp is nestled in a tranquil setting within a riverine forest. 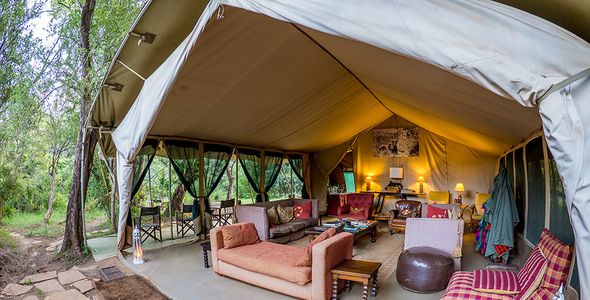 After an early breakfast, you are transferred to Wilson Airport for a short flight to the Selenkay Conservancy. You will be met at a bush airstrip and transferred, with a game drive on route, to Porini Amboseli Camp. This intimate camp features spacious tents that retain the charm and feel of safari’s yesteryear. Tastefully furnished and equipped with solar powered lighting, your tent has an en suite bathroom with a shower, wash basin and flush toilet.

Go on game drives accompanied by skilled guides in the Selenkay Conservancy as well as the Amboseli National Park. Discover this rich wildlife region’s famous animals like elephant, lion, cheetah and giraffe. Enjoy a full day in Amboseli with a picnic lunch and sensational views of Mount Kilimanjaro. Back in Selenkay you have the opportunity to go on escorted bush walks with Maasai warriors and night game drives – activities not permitted in the national park. 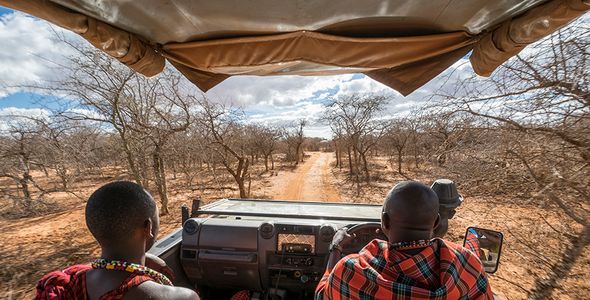 After a short flight back to Wilson Airport, you will connect with another flight into Laikipia and be transferred to Rhino Porini Camp in the Ol Pejeta Conservancy. Nestled in the foothills of Mount Kenya, Ol Pejeta is home to the Big 5, East Africa’s largest endangered black rhino sanctuary, and a sanctuary for rescued chimpanzees. The camp is set on the forested banks of a seasonal river in a secluded valley and comprises seven spacious tents with gorgeous views.

Spend your days on game drives in search of the Big 5, escorted walks with Maasai guides, and sipping on sundowner drinks in stunning locations. A highlight at Rhino Porini Camp is a visit to Baraka the Black Rhino who was rescued after losing his right eye defending his territory from another bull, and later lost sight in his left eye. Baraka is a resident at Morani Information Centre where he is Ol Pejeta’s black rhino ambassador. After an early morning game drive and breakfast, you are transferred to the airstrip for a chartered flight to Meru National Park. Rhino River Camp is situated in a privately-owned wilderness on the edge of Meru. Settle into your luxurious cottage and gaze out over the gentle flow of the Kindani River below or enjoy some quiet time in your private meditation area.

Whether you relax with a message or simply enjoy the sun beside the swimming pool, life at Rhino River Camp is all about indulging your every whim. Safari activities include bush walks and game drives in Meru to spot the Big 5, hippo, cheetah and the area’s 300 bird species. One last game drive will see you bid farewell to Meru, followed by a transfer to the airstrip for a chartered flight to the Masai Mara. Your final accommodation, Porini Lion Camp, is an award-winning property in the pristine Olare Motorogi Conservancy, well off the beaten path. This private conservation area borders the Masai Mara National Reserve and offers unsurpassed game viewing in an unspoiled landscape. Your spacious tent is tastefully furnished and features solar powered lighting, a private veranda, and an en suite bathroom with a hot shower and flush toilet.

The game drives in this area are sensational. You are likely to encounter the Masai Mara’s diverse population of resident game like elephant, buffalo, zebra, giraffe, hyena, eland and gazelle. And, of course, the stars of the show: the Mara’s famous big cats – lion, cheetah and leopard. If you visit between about July and November, you could also witness one of nature’s biggest spectacles: the annual Wildebeest Migration. 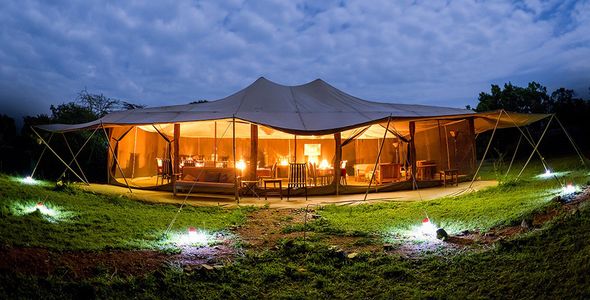 After an early morning game drive and breakfast, you will be transferred to the airstrip for a flight to Nairobi from where you will head back home or connect to your next African destination. Chat with one of our Africa Safari Experts about other places that combine easily with Kenya.