We believe that the most effective and immediate way to make a positive impact on wildlife conservation and community development is to go on safari. Through paying conservation fees – a tariff worked into the cost of your safari that's collected by our partners and transferred to indigenous landowners – you directly finance conservation and give communities (like the Maasai and Samburu) a tangible incentive to protect East Africa’s beautiful flora and fauna.

Also, booking your safari at the top eco-friendly lodges and camps in East Africa help create jobs for local community members. COVID-19 had a devastating impact (hopefully temporary) on tourism and the local communities that rely on it for financial support.

Ecotourism in East Africa will play a vital role in the recovery of safari travel, now more than ever. And by going on a sustainable safari, you have the opportunity to give back. So, if you’re considering a safari with a purpose, we’ve rounded up some of our favourite eco-friendly lodges in East Africa… 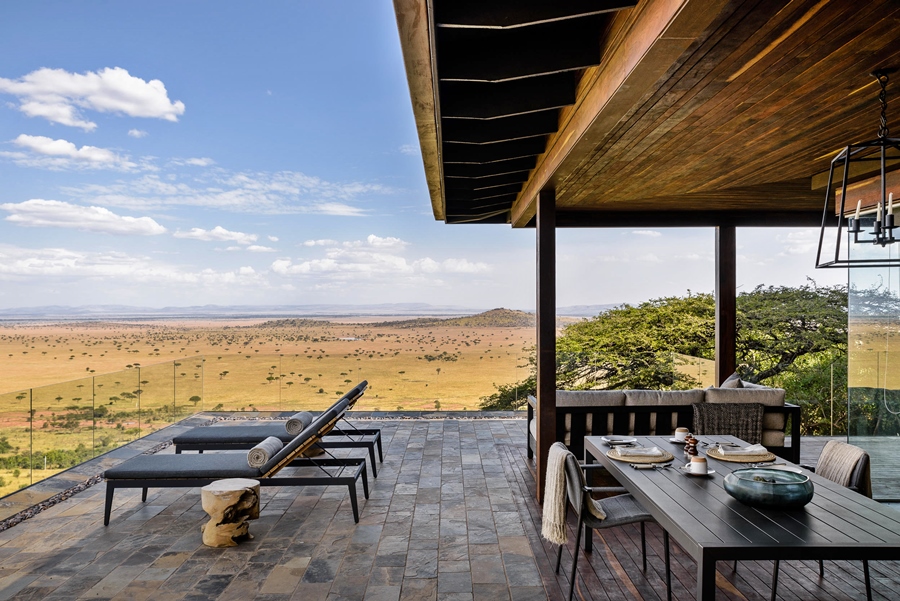 The Singita Grumeti Reserve is contiguous with the Serengeti National Park and is an integral part of the Serengeti-Mara ecosystem. In 1994, the Tanzanian government created the reserve to protect the path of the annual Wildebeest Migration, and granted the Grumeti Fund – a non-profit organisation that carries out vital wildlife conservation and community development programs – the right to manage the reserve from 2002.

In 2006, Singita became the Grumeti Fund’s conservation partner, and some of their combined successes include:

Sasakwa Lodge is one of Singita’s five eco-friendly lodges and camps in the Grumeti. This turn-of-the-century-style manor house pays homage to the romantic grandeur of safari’s bygone era. Perched on the slopes of Sasakwa Hill, it delivers breath-taking views over the Serengeti’s endless plains.

Singita boasts some of the top eco-friendly lodges in East Africa. Their lodges in the Serengeti are front runners in wildlife conservation, community development and sustainable tourism through programs like: 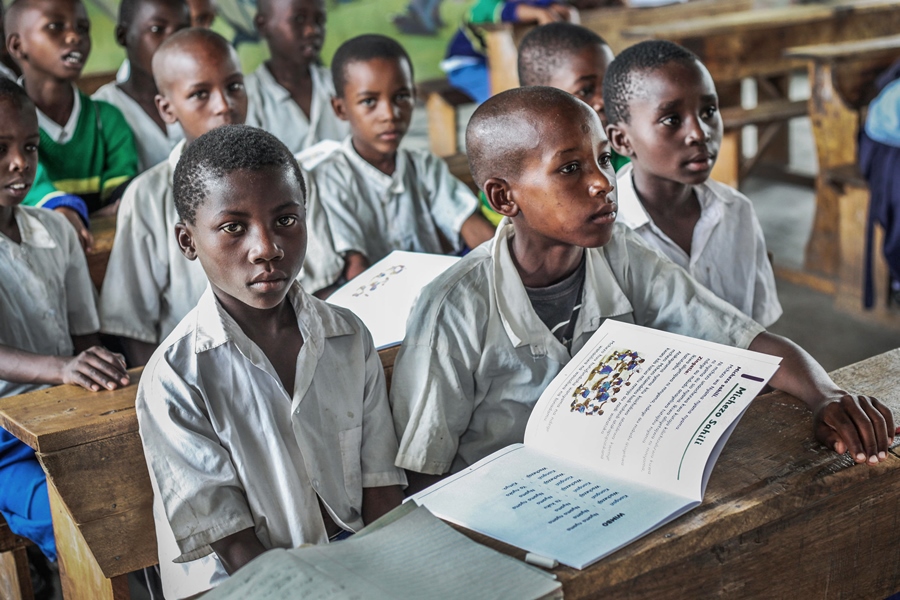 Chem Chem Lodge is an elegant and intimate property situated in a private concession between Tarangire and Lake Manyara National Parks. Not only do the owners manage and operate Chem Chem to ensure guests receive personal attention, but they also share a deep love and respect for Tanzania’s delicate ecosystem.

The non-profit Chem Chem Association was founded to give guests, donors and friends the opportunity to help foster Chem Chem’s commitment for a sustainable future through community outreach and conservation programs like: 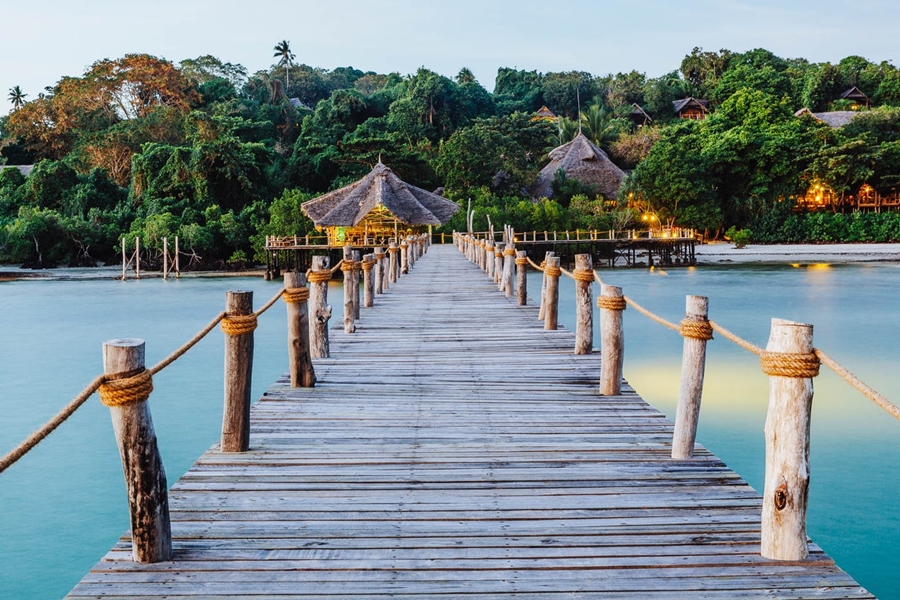 This rustic resort is located on Pemba Island, just off the south-western coast of Zanzibar. Boasting a gorgeous private beach, Fundu Lagoon is only accessible by boat and is one of the best coastal eco-lodges in Tanzania.

When Fundu Lagoon was developed in the late 90s, the aim was to have as little impact on the pristine landscape, and to only work with local resources and craftsmen.

Since then, this eco-lodge in Tanzania has been at the forefront of developing a sustainable style of ecotourism that works closely with local communities to promote Pemba Island’s conservation and environmental management programs.

Fundu Lagoon places great importance on local communities being able to benefit from tourism. The lodge works closely with neighbouring villages to help:

If you’re looking for an unforgettable post-safari experience with magnificent beaches, unspoiled scenery and warm-hearted people, then look no further than Fundu Island. The area is also one of the top five scuba diving destinations in the world. 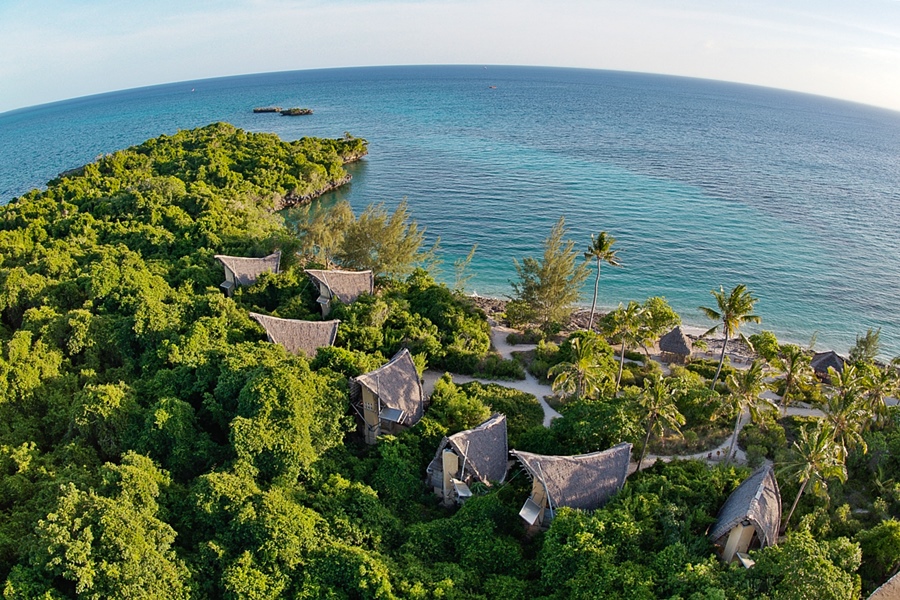 Situated in a Marine Protected Area off the coast of Zanzibar, Chumbe Island Coral Park is set in the heart of an award-winning private nature reserve. This boutique eco-lodge in Tanzania offers accommodation in unique bungalows situated right on the beach.

Upon its inception, Chumbe Island Coral Park recruited former fishermen from neighbouring villages and provided them with training to become park rangers. They played a vital role in early outreach programs to raise awareness within the local communities about marine ecology and the sustainable management of natural resources.

The nature reserve includes a coral reef sanctuary – the first gazetted marine park in Tanzania – and a forest reserve. Thanks to its protection, the reef is home to 90% of East Africa’s hard coral species, over 400 fish species, and is a vital feeding ground for green and hawksbill turtles.

The forest reserve harbours highly specialised flora that has developed to survive without any groundwater – the bedrock of the island comprises fossilised coral that is unable to store rainwater.

It’s also a sanctuary for a plethora of birds, rare and endangered species like Ader’s duiker, and a healthy population of coconut crabs (the world’s biggest arthropod).

Chumbe Island Coral Park is one of the most state-of-the-art, eco-friendly lodges in East Africa and a diver's paradise. 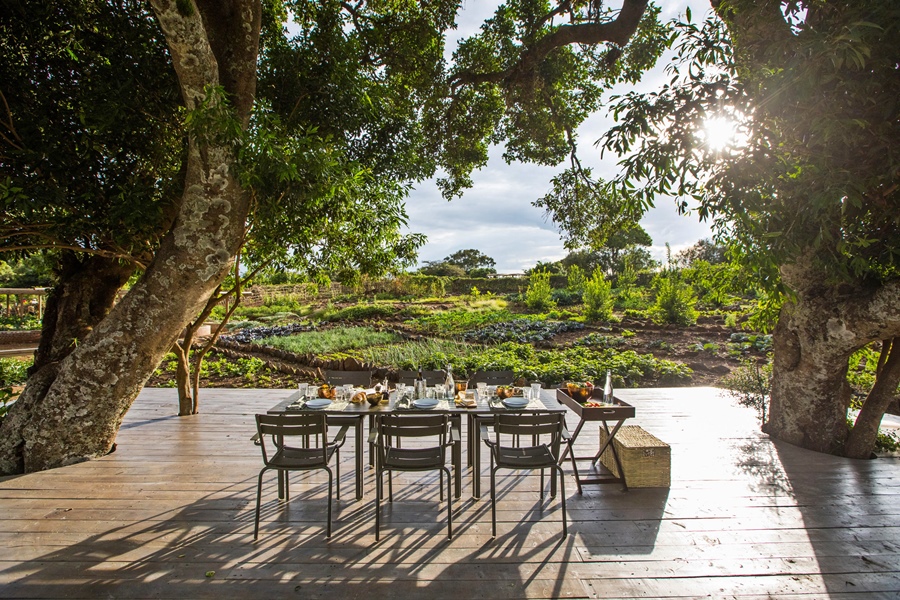 Arguably one of the top eco-lodges in Kenya, this remarkable owner-run safari property was founded on a deeply embedded principle: running a profitable business to make a meaningful and sustainable difference to its neighbouring communities, and the Masai Mara wildlife. Each guest at Angama Mara contributes a donation of USD 10 per night to the Angama Foundation.

The Angama Foundation is active in three fields of work:

A highlight of any stay at Angama Mara is experiencing its astonishing shamba (meaning 'vegetable garden' in Swahili). Growing and supplying fresh produce for mouth-watering meals in the middle of the Mara is a challenging task, but the lodge’s shamba team has mastered it.

From private shamba-to-table lunches in the garden to nocturnal honey harvesting missions and witnessing the daily chicken run (every morning Angama’s brood fly the coop and head for their favourite eatery: the compost heap), this extraordinary veggie garden is a much-loved experience for Angama’s guests. 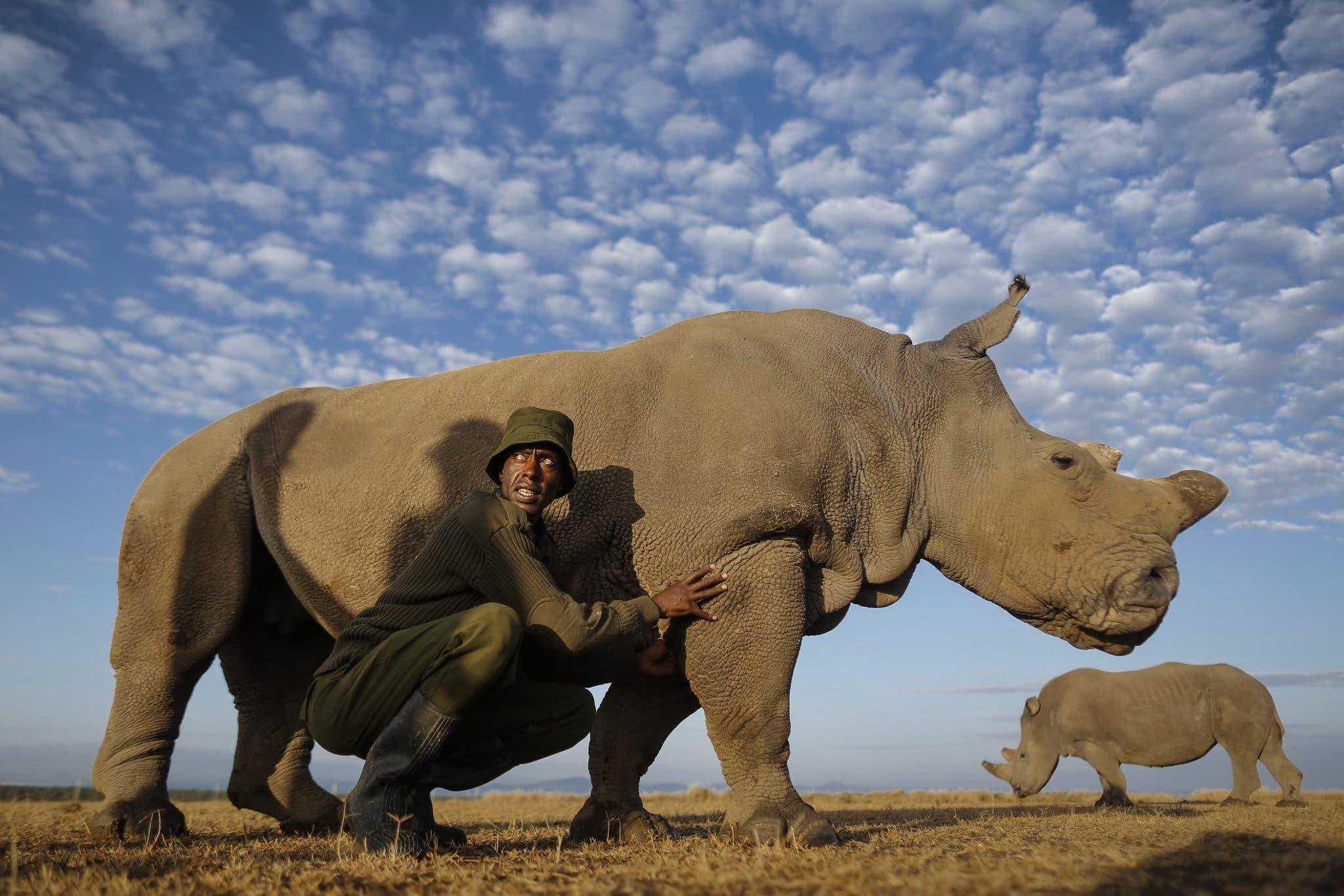 Rhino Camp is part of the Porini Camps collection, a selection of intimate, high-quality safari camps located in exclusive conservancies in some of Kenya's best wildlife areas.

A conservancy is a very specific form of land and wildlife conservation, whereby landowners enter into lease agreements with safari operators. This means that thousands of small-scale farmers and residents who own small parcels of land come together, pool their properties, and enter contracts with safari operators in return for monetary compensation, and other assistance like educational and healthcare programs, or livestock and grazing management.

The importance of tourism in conservancies:

Porini comprises some of the most authentic eco-friendly lodges in East Africa, all run on environmentally sound principles designed to have a minimal impact on the environment. Porini’s camps do not consist of any permanent structures and make use of solar power for electricity and eco-friendly charcoal for heating water.

Porini Rhino Camp is located within the Ol Pejeta Conservancy, a remarkable conservation area between the Aberdares and Mount Kenya. Ol Pejeta is home to two of the world’s last remaining northern white rhinos and is a sanctuary for critically endangered black rhinos.

The conservancy is not only a role model for rhino conservation in East Africa, but is also home to the Sweetwaters Chimpanzee Sanctuary – a refuge for chimpanzees that are rescued from the black market. 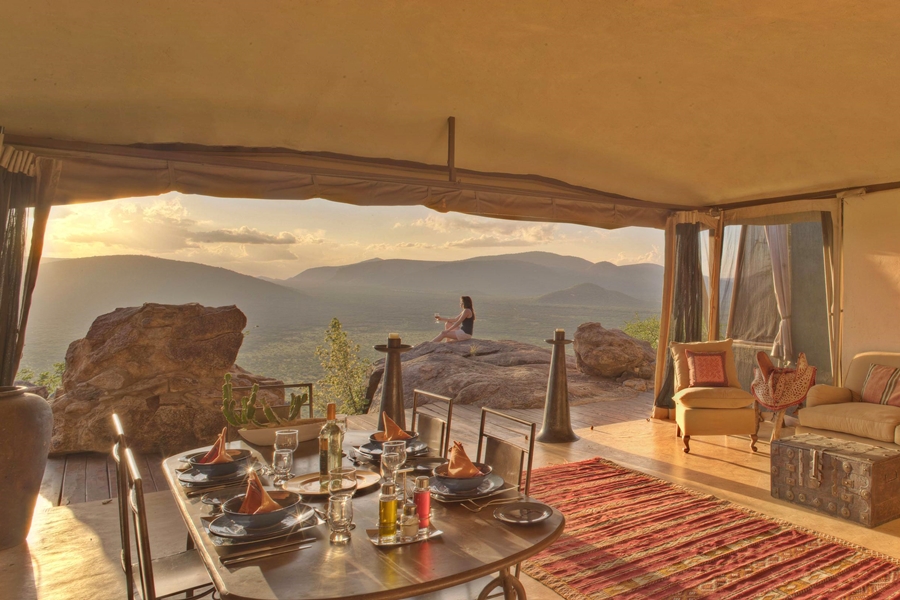 Saruni Samburu is a breath-taking property in the Saruni collection of lodges, located in the scenic mountains of the Kalama Conservancy that adjoins Kenya’s Samburu National Reserve.

Since 2003, Saruni has nurtured a close connection with the indigenous communities who own the areas where fauna and flora thrive. Saruni are among the founding members of leading community-run conservation organisations in Kenya that implement holistic land management policies like controlled cattle grazing and low impact tourism.

How you can make difference:

With the effect that COVID-19 had on safari travel, wildlife protection, and the welfare of the communities that depend on the income from tourism, Saruni have implemented the Adopt an Acre initiative.

Anyone can 'Adopt an Acre of land' in a conservancy via a direct donation (starting from USD 35) that will help fund land leases so that community members can continue receiving their rental income.

Saruni have also partnered with Seedballs Kenya to help regrow parts of the country. As a guest at Saruni, you can purchase a box of seedballs (seeds encased in fertile charcoal crusts) for USD 3 and throw them into degraded areas during your game drive – playing your part in regrowing Kenya's indigenous trees and shrubs.

Saruni Samburu is one of the top eco-lodges in Kenya, offering guests exclusive safari experiences in partnership with the neighbouring communities. 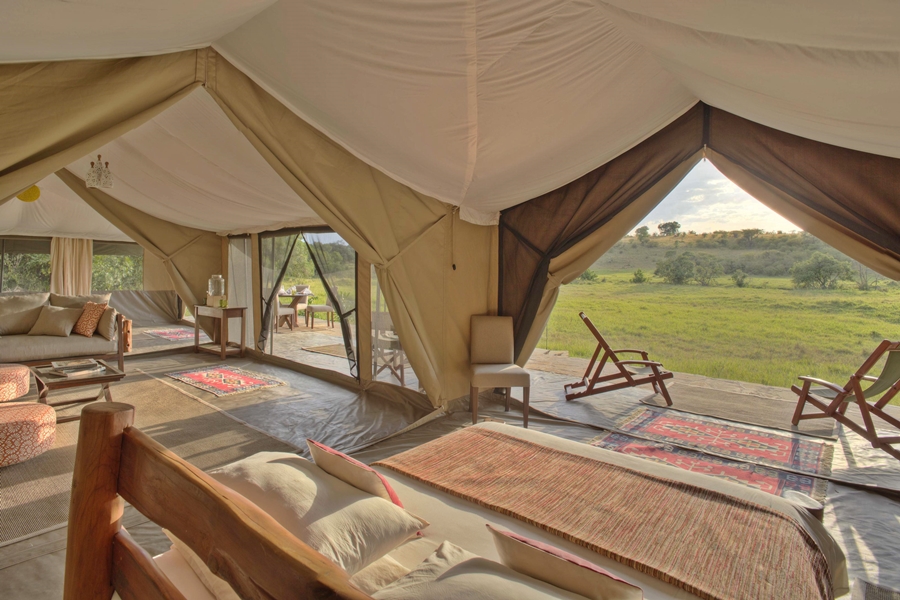 Kicheche Mara is an authentic tented camp situated in a prime game-viewing region of the Mara North Conservancy. It offers a friendly and relaxed atmosphere, and some of the best safari guides in the Masai Mara – all of whom have at least a silver-level rating from the Kenya Professional Safari Guides Association.

The Kicheche Community Trust was established to encourage the preservation of the environment while improving the welfare of local communities. The trust has partnered with the communities to support traditional and sustainable ways of living in harmony with the environment and wildlife through:

From $685 per person sharing

From $570 per person sharing 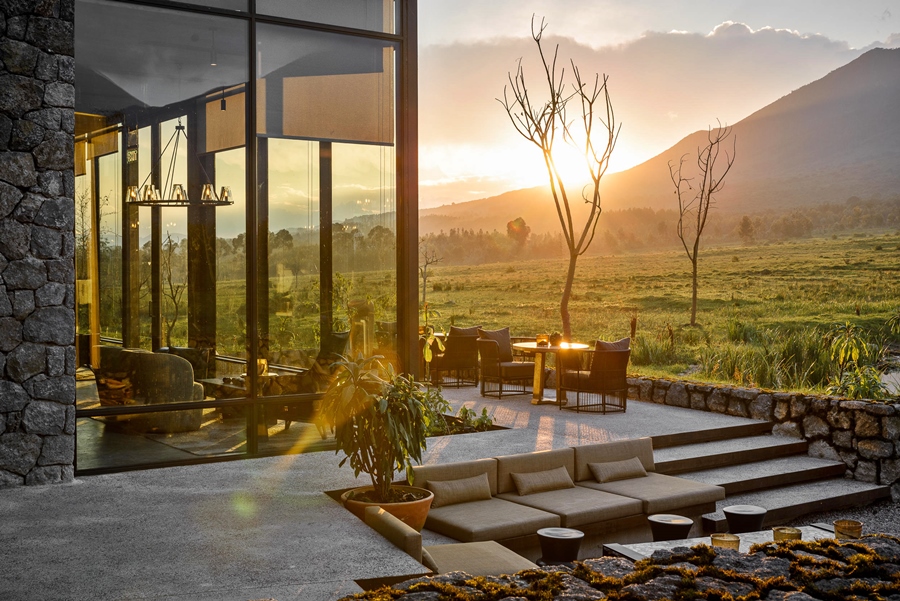 The magnificent Singita Kwitonda Lodge is set on the edge of Rwanda’s Volcanoes National Park and was designed with the utmost respect to its breath-taking location. One of the best eco-lodges in Rwanda, Kwitonda puts its guests within easy reach of a transformative gorilla trekking experience.

This eco-friendly lodge has a dedicated Conservation Room, an interactive educational space that’s managed by specialist conservationists. It provides guests with a unique perspective on endangered mountain gorillas and their natural habitat.

One of the biggest conservation success stories at Kwitonda is its on-site Akarabo Nursery. Established to help reforest, rehabilitate and maintain previously forested areas that were cleared for agriculture, the nursery has propagated and grown over 60 000 saplings to help sustain the natural habitat of endangered mountain gorillas. Within a year of opening Kwitonda Lodge in 2019, about 250 000 tree saplings were sourced from local community nurseries and replanted across the property.

Guests are encouraged to visit the nursery and plant trees on the property, leaving their legacy and playing a vital part in the ongoing reforestation program. And while you’re there, don’t miss a visit to the garden’s wonderful teahouse for a pot of fresh herbal brew! 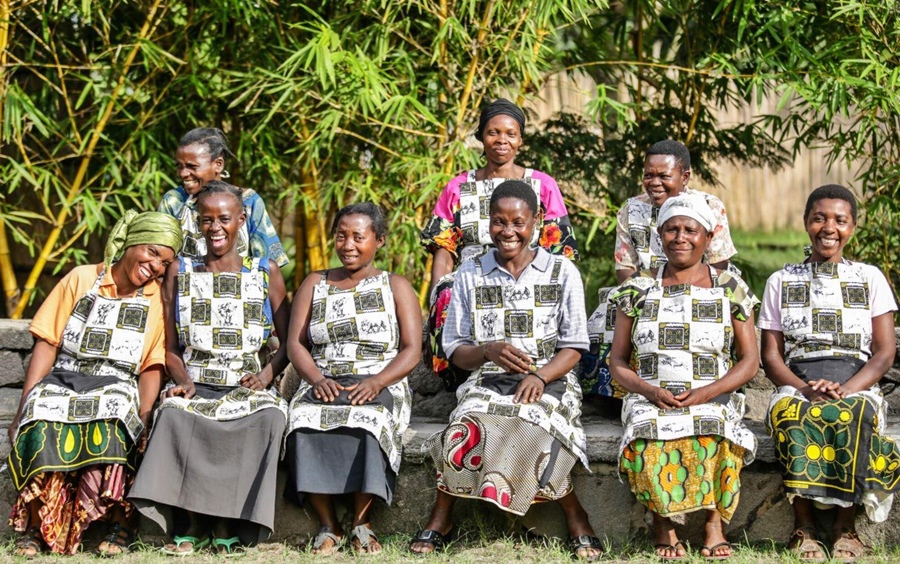 Set within a former coffee plantation and estate at the foot of the Rwenzori Mountains, Kyambura Lodge is the result of a sensitively restored coffee-processing and drying shed. This luxurious property is one of the top eco-lodges in Uganda and located on the edge of Kyambura Gorge, a sanctuary for endangered chimpanzees.

The lodge launched the Kyambura Gorge Eco-tourism Project in 2009 to safeguard the surrounding ecosystem. In recent years, the project was strengthened by the Volcanoes Safaris Partnership Trust, playing a vital role in the survival of Kyambura Gorge’s chimp population.

These entities assist Kyambura Gorge Lodge to work with local communities to promote sustainable ecotourism and conservation in one of Africa’s most important areas for primate and avian biodiversity.

Ready to Start Planning Your Safari With a Purpose?

Get in touch with one of our Africa Safari Experts to help tailor-make your stay at the best eco-friendly lodges in East Africa: